The Classic German Cookbook uses step by step instructions and 300 photos in order to make 70 traditional recipes from Austria, Czech Republic and Slovakia, Germany, and Hungary.

The seventy traditional recipes fall into the categories of:

For example, baked goods get triple billing as such breakfast, dessert, or snack edibles as:

Fish dishes have as super-common ingredients such respectively freshwater and saltwater denizens as:

Any compilation of seasonal favorites is determined by respective catches and harvests of:

Aromatic, tasty breads such as rye-wheat (roggenmischbrot) soak up flavors as plate cleaners.

Acknowledgment: Each Copy Sold Means a Tree Gets Cultivated

White asparagus (spargel) is appreciated as a side dish or as a main dish:

There definitely is more to German cuisine than bratwurst and Black Forest Cherry Cake (Schwarzwälder Kirschtorte).

Sources Consulted: Every Copy Sold Plants Its Replacement in Trees

Asparagus is featured in a strong soup. 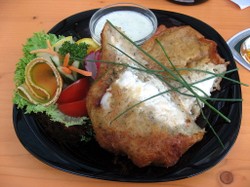