Synopsis: Newcomer Effie Garrand is determined to make a life for herself in Lochdubh and even sells some of her handmade crafts to the locals. However, when artist Jock Fleming comes to town, she is immediately smitten with him and, when he doesn't show any interest in her, makes up a story about him getting her pregnant and proposing.
When Effie is later found dead following a confrontation with Jock, everything points to suicide. But, Constable Hamish Macbeth isn't convinced and, despite no help from his superiors, goes in search of a murderer.

I usually try to take a short break between Hamish Macbeth books in an effort to read a variety of authors. But, I enjoyed the last one I read so much, I decided to pick this one up right away. As it turns out, I wasn't disappointed.

The thing I found I really enjoyed about this murder mystery was there seemed to be a whole lot of potential suspects. This included Jock, his ex-wife, Effie's sister and Jock's publicist, Betty Barnard. And, since there was so little really known about Effie's life before she came to Lochdubh, it also opened up a wide range of other potential suspects that weren't even easily seen.

I was actually able to guess at who the killer was well before I got to the end of the book. However, there were still just enough unanswered questions to keep me reading, especially since it seemed as though every single possible suspect was lying about something.

Adding to the mystery was the second death, involving an American tourist. While it seemed as though the death might have been related to Effie's, there was also the potential for it being completely unrelated, especially when it was revealed his soon-to-be-ex wife was in England and she was set to inherit a lot of money. The fact she also seemed kind of suspicious pretty much from the moment she arrived in Lochdubh also made it difficult to rule her out as Effie's murderer as well (though there was no known motive).

While I don't normally enjoy the "B" stories in murder mysteries, I do have to admit I thought Macbeth's love quadrangle with Betty and former lovers Elspeth Grant and Priscilla Halburton-Smythe was kind of funny, especially when a misunderstanding resulted in him being accused of sleeping with yet another women as well. I was definitely curious to see how that would wind up ending though, to be honest, with all the issues the women he dates seem to have, I do think he'd be better off staying single.

I don't know if it is the best Hamish Macbeth mystery I've read, but it was still an entertaining mystery and I would recommend it as a result.

StevenHelmer, Thank you for practical information, pretty pictures and product lines.
In particular, this series interests me just because of the last name of the protagonist. Which book would you consider the best about Constable Macbeth? 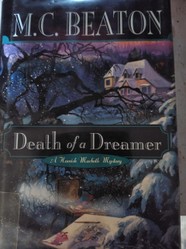