A review of the 1953 Hercule Poirot mystery written by Agatha Christie that also goes by the title After the Funeral.

Synopsis: Richard Abernethe had been in poor health so, even though he died suddenly, there was no reason to suspect foul play. That's why, when his sister, Cora, suggests he was murdered during the will reading, his remaining heirs, already counting their money, think she is a fool.
However, when Cora herself is bludgeoned to death with a hatchet, Richard's lawyer, Mr. Entwhistle, begins to suspect there might be some truth to what she had suggested and ultimately reaches out to his old friend, Hercule Poirot.

Now that my daughter has a short break from ice skating, I have been making an effort to find time to read every night (rather than just when I'm at the rink) and, after a short break from murder mysteries, I wound up reading this Agatha Christie novel.

After the first couple chapters of the book, I wasn't really sure what to expect from it. The possible mystery surrounding Richard Abernethe's death seemed like it would be OK but, I'll confess, didn't really excite me all that much and I was afraid the book would center around that. However, after finally finishing the book last night, I have to say this one is among my favorites.

There are a couple things that really stood out for me as I was reading this book. The first was the long list of potential suspects. I don't think there was a single redeemable character among Richard's family. They all made it pretty clear they weren't very fond of either Richard or Cora and, since none of them had a solid alibi, any of them could have turned out to be a cold-blooded killer.

In fact, I found I couldn't rule anyone out, including Mr. Entwhistle. He seemed to be the only one who cared about the somewhat mysterious circumstances of his client's death and the brutal slaying of his client's sister. However, as Poirot himself pointed out, he's had other cases where the person who hired him turned out to be the killer.

I'm also going to applaud Agatha Christie for pulling a fast one on me while reading this book. At one point, I thought I discovered an important clue before Poirot did. And, when he later found that same clue, I was patting myself on the back. Then, at the very end of the book, when Poirot did his reveal, I learned I fell for a pretty solid red herring that ultimately had nothing to do with the mystery.

Of course, the thing that really threw me off when it came to this mystery was the ingenious way Christie essentially invented a fake motive. I pretty much was fooled by what looked like a simple incentive for murder - Richard was murdered for the money, Cora was murdered for opening her mouth and Cora's paid live-in companion, Miss Gilchrist, was nearly murdered because Cora might have told her who the killer was. I won't go into any detail other than to suggest, if you're reading the book, look for a second motive. If you do, maybe you won't be fooled as easily as I was.

This is an interesting murder mystery that has a pretty unexpected twist at the end. I would highly recommend taking the time to read it if you get a chance.

StevenHelmer, Thank you for product lines, pretty pictures and practical information.
The library system does have Funerals Are Fatal amongst Agatha Christie books. It also has the film version with David Suchet as Hercule Poirot.

Would you happen to have seen any of the filmed versions of Christie books?

A review of the classic murder mystery novel published by Agatha Christie in ... 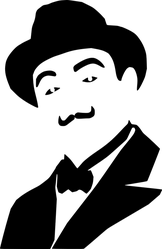 A review of the classic murder mystery novel published by Agatha Christie in 1941.
Loading ...
Error!