A Classic TV series from the pen of Alan Bleasdale. A cutting indictment of Thatcher's Britain

When and why I bought

Christmas gift shopping can be fun but it can be one big pain in the bottom. A full day's shopping trip to Meadowhall in the North England proved productive but it was still tiring in spite of the refreshments. A treat was in order. For me it was a boxed set of Alan Bleasdale's Boys From the Blackstuff.

Alan Bleasdale is a favourite of mine. I love his sardonic style. It is full of pathos and comedy. So often these two emotions go together. Bleasdale always combines them beautifully.

Alan Bleasdale was born March 23, 1946, in Liverpool, England. His roots where in a working class UK family. He first became a teacher before finding success as playwright. Some of his early work found fame on the radio but ultimately many were shown on British TV.

Boys From the Blackstuff was very much of its time. That does not mean it is not relevant today. In fact it fits perfectly with the current economic doom and gloom.

The boxed set I purchased includes the original play for today as well as the whole series. When the play for today was aired in 1982 it made for powerful TV viewing. It won various awards. Many of the cast went on to become household names in the UK and beyond.

The cast included Bernard Hill, Michael Angelis, Julie Walters and Peter Kerrigan. You may find that you know many of the faces though.

The series is set in Merseyside, that is Liverpool, at a time of depression. Maggie Thatcher was in power and boy was she loving it. The working classes never had it so bad. As Thatcher dismantled Britain she left many casualties by the wayside. Families who would never experience work a again. Industries that vanished without a trace.

A bit like the way things are going now.

This is why BFTB seems as pertinent today as it was almost 30 years ago.

At times it is so poignant it will make you cry. At others sad as the scene may be you will find it hard not to laugh. The series follows a group of men and their families as the recession bites. Their work laying roads dries up. The blackstuff. The tarmac. They are left trying to eek out a living working "on the side" and claiming meagre benefits

Bernard Hill's character, Yosser, became famous for his pitiful " Gizz a job, I can do that".

As the series moves on the lives of all the characters slowly unravel.

Of course the thing was that at that time in Thatcher's Britain there was no minimum wage. Emploers would also rather you claimed a beneift and worked for them for a pittance. They would not employ a person and risk having to pay sich pay or even ordinary pay when the work was thin on the ground.

Unofficial casual labour was so often the order of the day.

Now I know what you are thinking. Does not sound like much of a treat. However for me it was. The series moved me the first time around and it is proving just as enjoyable to watch in the 21st Century.

Those of you too young to remember this period of time may find it interesting. As the cuts continue to bit lots of things are possible. Employment rights are already under attack in the UK and there is nothing to say that the minimum wage will survive.

Watching BFTB is a stark reminder of just how bad it could get. That is if we let it.

It is rated 15 in the UK as it contains some adult scenes.

Yes Zteve sadly it is now as relevant as ever

Ethel, I remember the 'Boys from the Blackstuff' well it struck a chord with millions of people in the UK when it was first shown. I particularly remember the poignant 'Yosser's Story' a man driven to madness in his desperation to find work. The series is very relevant today in the UK with the plight of so many people desperate for a job. An excellent article! 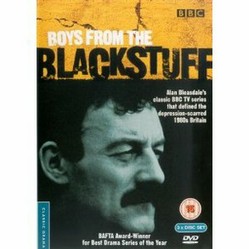