Brick Lane is close to the City of London, yet part of the East End. Full of authentic restaurants and bars, it's a great place to go for food and some shopping.

From Jack the Ripper to the Huguenots, Jews to Bangladeshis, Brick Lane has seen them all. Bustling and lively, it’s a great place to go if you want to try authentic Indian food at reasonable prices or you want to immerse yourself in the trendy local culture. If you are an art lover, visit one of the galleries, or go to one of the Sunday markets. If Street Art is your preference, Brick Lane is the place to go. You’ll find work by Banksy here, as well as others.

A bit of history

At the Eastern side of the City of London, starting as Osborn Street in the south, where it junctions with Whitechapel High Street, running up to Bethnal Green Road in the north, Brick Lane is also known as London’s Curry Mile.

It has had a chequered history - for one thing, it is in the heart of “Jack the Ripper Land.”  If going on a London Walk is your thing, the Jack the Ripper tours will take you to number one Brick Lane.  It’s now the Sheraz Bangla Lounge, a lovely restaurant, but in those days it was Ye Old Frying Pan public house, where Mary Nichols, Jack the Ripper’s first victim drank the night she was killed.  The restaurant has photographs of the old pub on one of its walls.

Brick Lane has also been home to various immigrant communities from the French Huguenots in the 17th century, to Irish and Ashkenazi Jews in the 19th century through to Bangladeshi’s today.

The name Brick Lane originates back to the 15th century when bricks were made in the area.  Later, in the 1680s, Truman’s Black Eagle Brewery was established, and, whether by coincidence or design, the population started to grow.  The brewery site now houses galleries and markets as well as other businesses.

Over 50,000 Huguenot refugees came to Britain before the French Revolution to escape persecution - members of the French Protestant church, Britain was one of the chosen countries because it was already protestant.  Those that settled in the East End probably did so because they were silk weavers, and the trade was already well-established in the area.

Subsequent to this, the area became well known as a Jewish area - the Beigel Bake is still there; and is renowned in East London as one of the finest places to get Beigels.  I remember going there after finishing a night shift, many years ago, to buy the Beigels before going home to bed!  It’s still open 24 hours a day and is great place for a snack.

There is still a Sunday Market that dates back to the 19th century when the Jewish community was predominant.  Nowadays, it sells a bit of everything, and is worth a visit even if you aren’t really intending to buy anything.  You never know what you might find. 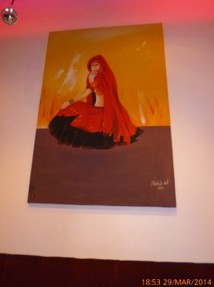 But it’s the restaurants that, for me, are the real draw in Brick Lane.  Starting down in Osborn Street, they run on both sides of the road up to number 136.  I reckon that there are 27 restaurants along there, interspersed with bars and supermarkets.  Some are licensed, some let you take your own drinks.  I haven’t been to them all – yet...  It’s my aim this year to visit as many of them as I can. My most recent visit was to the Aladin, winner of the Taste of Brick Lane Curry Awards, 2014.  The food tastes so fresh, it is delicious.  It’s a bustling little restaurant, always busy.  The Aladin is one that’s not licensed, but they don’t charge corkage on drinks that you take with you.  Most of the restaurants have people outside trying to attract you in, but be put off.  A polite “no thanks” always works well.  Maybe the best thing about Brick Lane is that even though you are close to Central London, the prices are very reasonable – my last meal in the Aladin was only £26 for two for starters and main courses!  There aren’t many places in London you can have a meal for as little as that!

Nearby, within walking distance, is the recently modernised Spitalfields market.  It’s very trendy and quite expensive, but worth a look around.  I fully recommend a visit if you are coming to London for a few days.

Telesto, Thank you for the street history! Are take-out drinks carried out in covered cups -- as the drink equivalent of the classic take-out food white container -- or in their original containers? The only equivalent I can think of here to "people [outside the restaurants] trying to attract you in" is people at the curbs, often dressed up as animals, clowns or Statue of Liberty lookalikes and paid by tax services to draw in customers for filing income tax forms in April! The Bank Holiday Murders: The True Story of the First Whitecha...
100%  22   14 KathleenDuffy
United Kingdom of Great Britain and Northern Ireland