Sybil Andrews used painting and linocut printmaking to combine pastoral life with the dynamism of modernity. Futurism, Cubism and Vorticism were her major influences.

Sybil Andrews (1898-1992) found her artistic niche in the medium of the linocut. Whilst much of her work was in praise of pre-industrial, agricultural life, she nevertheless incorporated Cubism, Futurism and Vorticism into her linocuts.

In this way she merged the past with the dynamic present, lending a new energy and power to this often sentimentalised genre.

Sybil Andrews was born in Bury St Edmunds, Suffolk on 19th April 1898. Her family had long-established links with the town, one of her ancestors being Walter Tyrrell who had been accused of the death of King William Rufus.

The young Sybil became familiar with watercolours from an early age. Her parents presented her with a paintbox to keep her amused. Her interest fuelled, she later attended the local art school and began drawing from plaster casts.

Towards the end of the First World War Sybil worked as an oxyacetylene welder in an aircraft factory making parts for the Bristol fighter. She therefore experienced the cutting edge of dynamic, modern, industrial life harnessed for the pursuit of war, whilst harbouring a love for the dying agricultural world around her. Both elements of this changing world would be combined in her linocuts.

Sybil Andrews and The Grosvenor School of Modern Art

At the end of the war Sybil Andrews moved to London’s Chelsea where she attended Heatherley’s School of Fine Art. Here she met Cyril Power. He was an architect by trade and an artist. Twenty years her senior, they began an artistic partnership that would last until the beginning of the Second World War.

Examples of the Work of Cyril Power

After Heatherley, Sybil worked as the secretary at a newly-opened school, The Grosvenor School of Modern Art. She was able to attend classes, in particular Claude Flight’s lectures on the art of the linocut print.

The Grosvenor School was looked on with suspicion by the artistic establishment. It was innovative and open to modernist ideas from Europe. In the heightened atmosphere of post-war nationalism, such ideas were seen as subversive.

Claude Flight was an important influence on Sybil Andrews and under him she perfected the art of linocut printmaking.

This technique was not new; it was used in the early 20th century by some German Expressionists and by members of the Russian Constructivist movement. Claude Flight’s new technique meant that his students could create linocuts using more than one colour, with a different block for each colour.

Claude Flight was also a champion of modern art and was particularly influenced by the Futurists, including the British artist, CRW Nevison. He had met Nevison in 1912 when they were both fellow students at Heatherley’s.

Flight did all he could to promote the linocut print, exhibiting his own and his pupils’ work, including Sybil’s. His influence is felt today with renewed interest in the art of the linocut.

In 1938 Sybil Andrews moved to the New Forest. Once again, the outbreak of war offered an interesting work opportunity – this time boat-building for the British Power Boat Company at Hythe, near Southampton.

Sybil enjoyed this work, receiving full training and working equally with male colleagues. The company gave her permission to make notes of the boats being built. These sketches were used for a series of seven canvases which can now be seen in the RAF Museum, Hendon.

Whilst working in the shipyard Andrews met Walter Morgan. They were married in 1947.Like many others, the couple found life after the war difficult and they decided to move to British Columbia in Canada.

Sybil Andrews and Walter settled in a remote area of British Columbia, Campbell River. As well as becoming a well-respected teacher and mentor, she was a recognised artist in Canada, becoming a member of the Canadian Painter Etchers and the Print and Drawing Council of Canada.

Her work, some freely donated by Sybil herself, is in many Canadian public galleries as well as the British Museum, the Victoria & Albert Museum, the Clock House Museum in Bury St Edmunds and the Los Angeles Museum, to name a few.

The Glenbow Museum in Calgary owns a significant number of Sybil Andrews works, including plates, prints, sketches, and her tools.

He demonstrates his lino cutting technique

I came across this link to a video of Gary Ratushniak, a pupil of Sybil Andrews, demonstrating the art of his linocuts and explaining how he was influenced by Sybil yet modified his techniques.  It is a fascinating insight into this delicate art.

Sybil Andrews died in 1992 aged almost ninety-five. Her influence as a lino-cut printmaker, along with her mentor, Claude Flight and the Grosvenor School, is now recognised world-wide.

In addition, her enthusiasm as a teacher meant that, until one month before her death, Sybil Andrews was still teaching her art class in Campbell River.

Hello EmmaSRose - It's always lovely when someone notices your post! Thank you for your comments - I agree about her mentors. It's good to think of them all working together with new ideas and looking to the future.

Hi Mira - I'm so pleased that you enjoyed this piece. I love her work. :)

cmoneyspinner - Ha ha! You are so right!! Thanks so much for the pin. Sybil was lovely!

I like all the works you presented here. Nice article. I highly enjoyed it. :)

The Grosvenor School was looked on with suspicion because it was innovative and open to modernist ideas? Poor Sybil. If she or one of the other artists had thrown a few bare naked ladies right from the start, bet there wouldn't have a problem at all! :) Subversive huh? I don't see it! I like this lady's bio. She just kept moving forward. This one is going on my ARTISTS I Fancy Pinterest board.

Hello ologsinquito - Yes, she was very influenced by the Italian Futurists who were inspired by modernity - the 'Speed' print is actually by her teacher, Claude Flight, and you can see his influence too.

She had a unique way of looking at things, no doubt about it. I like her "Speed" painting.

Dora Carrington is now recognised as a significant British painter. This exce... 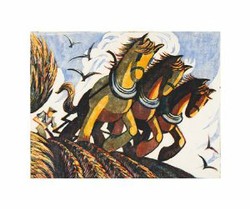 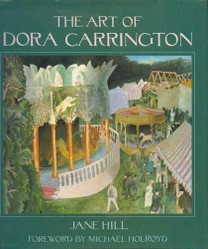