In the aftermath of Tyregate, the Formula One racing teams head for Silverstone and the British Grand Prix on Sunday 30 June 2013.

Sebastian Vettel and Red Bull are building a solid lead at the top of the drivers and constructors championships, but since the last grand prix most of the talk has been over the tyre testing row at Mercedes and on whom will be the likely successor to Mark Webber should he leave Red Bull at the end of the season as expected. And Renault has unveiled its new engine. All that and more as the teams prepare for the British Grand Prix at Silverstone on Sunday 30 June 2013.

While the so-called Tyregate row has dominated the headlines over the past two weeks, attention will return again to real racing as the Formula One teams head for the UK and the British Grand Prix at Silverstone on Sunday 30 June 2013. And while Mercedes will be glad at being let off with little more than a slap on the wrist, the happiest team on the circuit is Red Bull, enjoying a 51 point lead in the constructors championship and its star driver Sebastian Vettel a 36 point lead in the drivers championship after an emphatic win last time out in Canada.

How things have changed from earlier in the season when the team-orders fiasco looked like tearing the Red Bull team apart. True, Mark Webber is clearly still unhappy, only managing fourth in Canada, and the rumour mill predicts his departure from the team at the end of the season, but the management will care little if Vettel keeps winning races and brings the championships back to them once more. The only question is that if Webber leaves, who will replace him. It seems unlikely that any of the leading drivers would put up with Vettel the way that Webber has, so the most likely is an up-and-coming driver, and Force India’s Paul di Resta looks a good bet.

In the Ferrari camp, meanwhile, Fernando Alonso is emerging as Vettel’s main challenger, after a good second place in Canada, but Lotus’ Kimi Räikkönen, who started the season strongly, is confident he can get back into the mix, especially as the team has been busy upgrading the cars ready for Silverstone.

With the pressure of Tyregate now over, Mercedes will be giving their full attention to the performance of Lewis Hamilton and Nico Rosberg, who again looked good in qualifying at Canada but struggled a bit in the race itself, though Hamilton did manage to reach the third step on the podium.

The race could pull some surprises as the other teams have also used the three-week break to bring in upgrades and with so little separating the leading cars anything could happen, maybe even Williams getting their first points of the season. And McLaren will be smarting after their long record of consecutive points scoring was brought to an end in Canada when Sergio Perez and Jenson Button could only manage 11th and 12th, respectively. Their fans will be hoping (or praying) for a better performance for their home grand prix.

Silverstone had a bit of a revamp in 2011 but still kept its high-speed nature, though some fans were unhappy about the restricted view of the pitlane. The tight right-hander of Village normally produces excitement. Brooklands is turn six and is a good spot for overtaking action, especially as the straight leading up to it is a DRS zone. Mark Webber won this race last year.

The wraps have been taken off the Renault engine that will power the Red Bull and Toro Rosso teams next year. The 1.6-litre V6 turbocharged Energy F1-2014 will hit a maximum 15,000rpm compared with the 18,000rpm that the current 2.4-litre V8 engines are allowed to reach. They will use the new ERS energy recovery system. Renault also supply Caterham and Lotus, but neither team have announced which engine they will go with next year.

There has been a change of ownership at Lotus. Genii Capital has sold 65 per cent of the team to Infinity Racing, a consortium backed with Middle Eastern oil money and chaired by American Mansoor Ijaz.

Well written Steve. Personally, I would love to see Webber go to Ferrari on a year to year deal and continue to be thorn in Vettel's side.

Vettel has built a solid lead and it seems there is no serious challenge from th rest. Yet it will be an interesting race. Thanks for the report, Steve.

The Formula One racing teams head for the famous street circuit of Monte Carl... 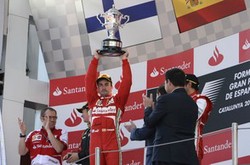 The Formula One racing teams head for the famous street circuit of Monte Carlo for the 2013 Monaco Grand Prix on Sunday 26 May 2013.
Loading ...
Error!