Cacomistle, as a New World native, ranges from southern Mexico to western Panama.

The name is of Nahuatl origin. In Nahuatl, tlahcomiztli means "half cat" or "half mountain lion."

One of cacomistle's common names, ringtail, is shared with the related Ring-tailed Cat (Bassariscus astutus), affectionately nicknamed "Miner's Cat," whose range extends further north, up to the Pacific Northwest in the United States. One difference between cacomistle and the Miner's Cat is in their claws: unlike the latter, cacomistle's claws are not retractable.

With a proclivity for solitude, cacomistle stakes an ideal territory of at least 20 hectares (49.4 acres).

Cacomistles may be seen as environmental indicators, for they prefer forest habitats and therefore are susceptible to effects of deforestation.

Diorama of predators and prey: two cacomistles corner a spotted skunk (Spilogale spp), which stands on its front legs when threatened.

People who share the same first and second names are not necessarily related. Animals and plants whose first and second names repeat can be considered as the equivalents of siblings when it comes to scientific nomenclature. They will be considered as the equivalents of close relatives when the first name is the same and the second differs.

Such can be said of the cacomistle of Central America and Mexico and the ringtail of Mexico and the United States of America. Both mammals look cat-, fox- and raccoon-like even though they each belong to the raccoon-like -- procyonid -- family of mammals. They overlap in bearing the same first name through their categorization in the genus Bassariscus. They nevertheless split over the second name, with cacomistles carrying the species name sumichrasti -- subdivided into subgenera latrans, notinus, oaxacensis, sumichrasti, variabilis -- and ringtails the species name astutus.

As is the case with their ringtail relatives, cacomistles convince viewers of their feline looks with:

They give fox-like impressions with their elongated, pointed snouts. They manage effective raccoon imitations with:

At the same time, a cacomistle’s eyes may convey the impression that something is not quite right with the “raccoon” in question. A cacomistle’s eyes indeed peer from facial masks which are the reverse of a raccoon’s: white with black edging, not black with white.

Eyeshine designates the color that the eyes appear to be upon reflecting nocturnal or photographic lights. Like ringtails, cacomistles may exhibit one of two colors under such circumstances. Their eyes suggest a raccoon’s when they look or photograph as yellow during nocturnal foraging or photo opportunities. They will not at all when they project the color red.

So cacomistles and ringtails have much in common. The above-mentioned pooling of attributes inspires touting both as the only living species in the

It likewise inspires a pooling of common names, with:

With so many similarities, is it possible to differentiate visually between the two species?

Ears, paws, tails and teeth are keys to knowing whether or not the specimen is a cacomistle. Every cacomistle ear forms into a clearly -- not roundly -- pointed triangle. Every cacomistle paw has a naked sole to which non-retractile -- not retractable -- claws attach. Rather than equivalent body and tail lengths, every cacomistle tail -- reaching adults lengths of 15-21 inches (38.1-53.34 centimeters) -- is about 1.25 times body length. Rather than lending themselves to countability through consistently demarcated rings, every cacomistle's tail quickly will fade from buff-and-black rings at the top into solid blackness well before the tip.

The last major physical difference can be the most challenging to ascertain. It is a brave -- and foolhardy? -- feat to verify the lower-lying ridges connecting a cacomistle's molar and premolar cusps. Among wildlife, the equivalent of a smile -- showing one's teeth -- may be neither friendly nor reassuring to behold. In the cacomistle's case, it reveals 40 dauntingly sharp teeth, of which the canines particularly are well-developed.

Bromeliads such as Tillandsia ionantha, which collects water and attracts insects and small animals, serve as food and water supplier for cacomistle.

The bromeliads that appeal to cacomistles do not grow in soil. They grow on trees. They hold water reserves -- enriched with floating animals and insects -- which satiate hungry, thirsty cacomistles.

Favorite fruits include bananas, papayas, and wild figs. Harvest time may provide excellent opportunities for viewing female and male, older and younger cacomistles. Trees in fruit will cause one of nature's quietest, shyest mammals to gather in groups of 5 to 9 for super-loud munching and noise-making.

In six of eight known host countries, cacomistles appreciate forest ecosystems at altitudes from sea level up to 6,562 feet (2,000.1 meters). They build dens in cavities or on tree branches and forks amid the middle and upper canopy levels of tropical rainforests -- cloud and evergreen, lowland and mountain -- and wet woodlands. Exceptions include:

Wherever they live, cacomistles commit to solitary lives. Home is located within a 20- to 136-hectare (49.42-336.06-acre) range which will be occupied by no more than one female and one male. Each range is non-overlapping and left physically unmarked. Scientists nevertheless suspect that some of the carrying, loud calling which cacomistles sustain for hours at a stretch may not only account for the Spanish common names guayanoche ("night-crier"), mico de noche ("night monkey") and mico rayado ("striped monkey") -- but also relate to vocally delimiting territories.

Solitary confinement ends annually with mating. Female cacomistles have a 44-day window of sexual opportunity -- through the monoestrous cycle -- anytime between February and June. Yearly, they mate just once, on one day, with one male. Sixty-three to sixty-six dates of gestation generally produces one offspring.

Cacomistle cubs are born blind. They average birth weights of 25 grams (0.88 ounces). They open their eyes five weeks later. They take solid food another 102 weeks afterward. They will learn foraging and survival skills yet another 1-2 weeks later.

From gestation through weaning, the father assumes responsibility for supplying mother and offspring with food. The six-month role can increase viewer chances of observing adult male cacomistles. Males often may be found catching a few tranquil winks of sleep during the day -- among tree roots, away -- but near to -- the family nest. They sometimes may be viewed playing -- if the mother so permits -- with offspring.

A cub can be weaned 12 weeks after birth. Hunting constitutes yet another skill which is transmitted from mother to offspring. A cub is sexually mature at 10 months. Every cub then will disperse to:

Cacomistles have been hunted for their warm, hued fur.

Cacomistle longevity thus far peaks at 23 years in captivity. It remains unknown in the wild. It undoubtedly responds to the vigilance of cacomistle predators:

The elusiveness of the cacomistle -- whose behavior can be more easily tamed than domesticated -- can be counterproductive to protective measures. Cacomistles generally face daily survival threats under unprotected circumstances. There nevertheless is cause for hope -- and the setting of precedents? -- in the legal coverage afforded cacomistles by Belize's:

Similarly friendly, supporting environmental endeavors also may be found in:

Until sustainability becomes the norm in development, the above-mentioned legislation, parks and reserves represent next-best effort to ensure the survival and respect the privacy of Central America's cloud-watching, tree-hugging cacomistles.

Cacomistles are native to all 7 Central American countries, including Costa Rica.

The White Nosed Coati (Nasua narica) is a ring-tailed mammal native to the Ne... 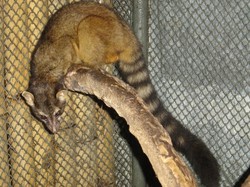 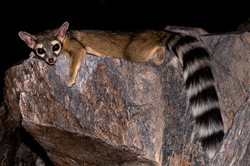 Is it a cat? Is it a fox? Is it a raccoon? It is a ring-tailed cat, a raccoon family member whose scientific name (Bassariscus astutus) means "cunning little fox."
75%  2   9 DerdriuMarriner
Raccoons 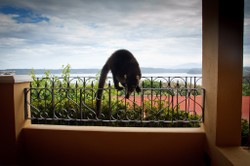