Overnight float trips are one of the most fun, inexpensive ways to get away from it all and relax, but it can be pretty tricky to get everything you need into a small boat.

Swimming Is An Activity For OUTSIDE Your Boat

If you wanted to swim down the river then you wouldn't need a boat. Keep the floor of your canoe dry to make for a much more pleasant trip.

Nobody wants to go swimming in the bottom of their canoe, and nobody wants soaked gear to greet them when they unload at their campsite. It not only makes life difficult, it weighs down your canoe. A gallon of water weighs 8 pounds... I'd rather carry a gallon of drinking water and leave the river in its bed. So how to prevent this?  These items are lighter than what you might traditionally take, but keep the water out.

Getting in and out of your canoe will cause you to take on a shocking amount of water, so foot gear that doesn't absorb a lot of water is a great idea. Even with mesh water shoes, though, try to slip your shoes off and wring them out before getting into your canoe. This can be done pretty easily by sitting sideways on your seat and keeping your feet over the side for a few seconds when you first climb in. Shoes are the main culprit for soaking your boat - put some thought into it!

These seem like an extra, but a towel is a lot lighter then a gallon of water. Throwing a towel on the floor of the boat underneath the feet of each passenger catches all the loose water and splashes and keeps it from sloshing around. You can wring the towels out at each stop and they'll keep absorbing, even if thoroughly wet. This has been a lifesaver for us, since we float with our toddler and he can make quite the soggy mess. It keeps us from having to bail water out and keeps our gear from sitting in standing water.

Even waterproof gear will eventually get damp and condensate.  Hang the towels to dry at your campsite and they'll be good to go for the next day.

Wearing swim trunks or quick-dry hiking gear will keep your seat from soaking your seat... if you catch my drift. Typical khaki or denim shorts hold a lot of water and take a long time to drip dry onto the floor of your canoe. If you go swimming then take 10 minutes to stand beside your canoe and wring out your clothes before climbing back in. Cotton underwear also soak up a surprising amount of water, so for girls, wear a bikini bottom under your trunks to keep those extra ounces of water from making their way into your boat.

I'll confess -- We pack a cooler in our canoe. We love our campfood. BUT, we also only ever camp one night because of the toddler. Any more than that and we'd be reconsidering our food amounts.

Keeping your cooler light is tricky:

Start by freezing 1 ltr bottles of water. They double as drinking water at the end of the trip, after they have thawed, and take a LOT longer to thaw then regular ice cubes. I've had them last 3 days on road trips before. They also don't soak the bottom of your cooler.

If you're meat lovers, like we are, then camping means fried fish, hot dog roasts and breakfasts of sausage and pancakes. All of your meat can double as ice until you're ready to eat it if you stick it in the freezer a couple days ahead of time. This will guarantee that it doesn't spoil before you're ready for it.

Measure out exactly what you're going to need. If you are taking pancake mix then measure out how many pancakes' worth of mix that you want into a ziplock bag. DON'T TAKE THE WHOLE BOX.  Measure out instant rice or pasta. Take a quart ziplock with mixed salt and pepper instead of a pound of salt and a 4 ounce container of pepper. Don't take a pound of grated cheese if you're only going to use enough to sprinkle on top of chili dogs. Don't take extra cans of chili - figure 1/4 cup of chili per dog and take exactly as much as you need.

#4 - Save Space By NOT Using Egg Containers.

I'm sure you've seen those expensive plastic egg cartons... don't use them. Eggs are a power food and are easy to cook, so take a lot of them. Use a narrow plastic container, I like the cereal ones, and wrap your eggs individually in paper towels to pack them in.. They are uncrushable and you can carry a lot more of them. I've never lost an egg with this method, and the extra paper towels are handy at a campsite for a lot of things. I can typically fit two dozen into one of those containers and that means we can scramble them for a group for breakfast and boil what we don't scramble for snacks later in the day.

Things like beef jerky, dried fruit and power bars are compact but pack a punch in the calorie department. If you're swimming and paddling then you'll be hungry, so light weight snacks are a must.

#6 - Leave The Soda and Alcohol Behind

This one kills me, but do it. Soda dehydrates you by forcing your body to use its fluids to process the sweetners and fluids weigh a TON. Alcohol not only dehydrates you, it can make a campsite dangerous. If you're floating to your campsite then it's very likely that you can't access it by car. Adding risk factors is foolish AND weighs down your canoe.  If you can't live without either, then make sure to take cans, and cut back on the number of them. Glass is prohibited on most rivers and will get you arrested or fined.  Only take one serving per day to satisfy cravings but not weigh you down.

A fun alternative to soda is to take fruit drink mixes. Lemonades and teas are refreshing and will satisfy your sweet tooth with less sugar, meaning you can use your drinking water to make them and still have enough.

Buy your water by the gallon. Individual bottles take up space, generate needless trash and don't go as far as you would think. DON'T use your drinking water for cleaning or for washing your hands. Take a large bottle of alcohol-based hand sanitizer to wipe your dishes down with AFTER washing them in the river.

For $3 you can get a five gallon bucket from a hardware store. These are watertight and uncrushable and loaves of bread stand on end in them perfectly. If you're taking bread, then take the 5 Gallon bucket. A bucket stores pretty easily behind the back seat of a canoe and can double as a seat at your campsite. It's a cheap, lightweight option!

Our cooking gear consist of a griddle, a spatula, a coffee pot, a cooking grate and some hot dog skewers. It's more weight than we like, but just enough stuff to let us cook all the camp foods we love.

It's supposedly the staple to a campsite, but if you can do without a cast iron skillet then leave it behind. An aluminum camp griddle with high sides is large enough to scramble a dozen eggs, fry fish or potatoes or cook pancakes. An 8 inch cast iron skillet weighs 4 pounds, but a 10x16" griddle only weighs 2.

If your griddle is secure on it, then it's big enough. If you cook things in the right order then you don't need a ton of space. Get your coffee boiling first and set it to the side to free up your grate.

Don't go for paper plates and plastic forks. Get some thick plastic plates and some metal utensils and use them for every meal. They weigh less than a package of paper plates and there's no chance of them getting ruined. They also don't rust like cheap tin dishes.

I know. This is supposed to be about packing light, but seriously, after a day on a canoe seat you will grieve if your tush doesn't have a comfy place to land. Find some lightweight lawn chairs with none of the bells and whistles and you'll feel like a king on a throne.

Camping Gear - Be Comfy, But Condense

If 3 peopleare going then cram into a 2 person tent. For real. If you're married, take a 1 man tent. You can do it, and you'll be glad you did.

If it's going to be over 65 degrees then just take one sleeping bag and a couple of super light, thermal blankets. You can open the sleeping bag and two people can sleep on top of it for the same comfort level and a lot less bulk.

Unless you know that you'll be sleeping on sand, then roll up a foam mat for each person. They're lighter than inflatable plastic mats and don't deflate or get holes, so they're a safer option. We've tried with and without them, and the difference they make means a happy second day vs a sore, grumpy and sleepy second day. They're worth it.

I can fit a pair of cotton yoga pants, a set of underwear and a long sleeved t-shirt into a ziplock bag. These are my campsite clothes. Full coverage for bug protection, but light weight and cool. If you take a change then you're river clothes get a change to dry out overnight and you'll sleep better, feel better and live better.

But ONLY pack ONE change!!

This isn't meant to be a comprehensive packing list -- make sure you find something that is! Don't forget the first aid items, bug spray, sun screen, hats and firestarter, just to name a few things!  Here are a few random tips for free:

Have fun, Be safe, Make memories!!

This is more my sort of camping! Luxury Camping or Glamping means you can en...

Read about a family vacation in an RV through some Western NationalParks. Vis... 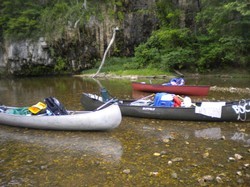 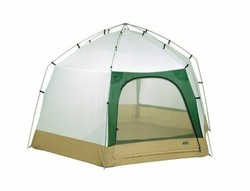 This is more my sort of camping! Luxury Camping or Glamping means you can enjoy the outdoors with some of those home comforts that normal camping means you have to forego!
83%  10   8 MaggiePowell
Camping Trips 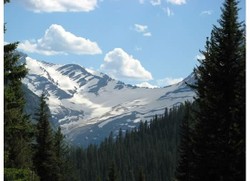