The Queen's Gallery, Buckingham Palace, presents Castiglione: Lost Genius, a display of oils and etchings by the little-known Baroque artist, Giovanni Benedetto Castiglione (c. 1609-1695). This exhibition of 90 drawings and prints, selected from the Royal Collection's comprehensive holdings, hopes to demonstrate that Castiglione is one of the finest artists of the Baroque era.

What little is known about Giovanni Benedetto Castiglione has been gleaned from court documents rather than from his art.

After training in Genoa in north-west Italy, Castglione acquired an early reputation for pastoral scenes of animals and shepherds. Before too long he was creating large-scale religious, allegorical and mythological paintings, and if it hadn't been for his foul temper he might have become Genoa's leading painting. In 1646, after hearing that the Doge of the Venetian Republic, Giovanni Battista Lomellini, had refused to accept a painting he had commissioned, Castiglione destroyed the painting in a fit of pique and fled the city.

He worked in various cities including Rome, Florence, Naples, Venice and finally Mantua, coming into contact with artists such as Anthony van Dyck and Nicolas Poussin. He soaked up numerous stylistic influences and was the first artist known to borrow motifs, or even whole works, from other artists such as Rembrandt and Titian. In the 1630s he reproduced Titian’s Sacred and Profane Love (1514) in the Baroque style.

His work may well have been unique – most 17th-century artists made preparatory drawings before committing to major works, but either this artist made no such initial preparations, or he systematically destroyed all his preparatory work. His output includes numerous spontaneous, but roughly finished, large-scale drawings in oil, as well as approximately sixty etchings and prints. Castglione is regarded by many as the inventor of monotype, a technique adopted some two hundred years later by artists such as Gaugin and Degas.

Paintings from the Baroque Era

Giovanni Benedetto Castiglione, Circe with the Companions of Odysseus Transformed into Animals, c 1650

The exhibition features some of Castiglione's best drawings, including Circe with the companions of Odysseus transformed into animals, image Omnia vanitas, image and a study of camels and goats, image dated about 1630, which may be his earliest surviving work. Where there camels to be found in Genoa? I doubt it, so this work was probably created from stock motifs.

Also on display is Head of an oriental (late 1640s), image reputed to be one of this artist's best monotype prints. The image was drawn directly on the plate. The artist then highlighted details of the subject's beard, turban and fur collar by scraping into the ink. He would sometimes reverse this process by entirely covering the plate with ink and then scraping the detailed design into it, a method which enabled him to create startling contrasts of dark and light, a technique known as chiaroscuro.

Giovanni Benedetto Castiglione failed to establish a reputation as a great artist during his lifetime. He did enjoy a brief period of success in 1762 when a group of 250 drawings were purchased by George III, as part of the collection of Joseph Smith, British Consul in Venice. However, this posthumous fame was shortlived and the artist dropped into obscurity. In the 21st century, as collectors compete for his work, Castglione is now acquiring the artistic reputation he failed to achieve during his lifetime.

Castiglione: Lost Genius will be on view until 16th March 2014. Tickets and further information can be obtained from the Royal Collection Trust.

You should definitely try to visit Buckingham Palace and The Queen's Gallery which is just around the corner - two separate destinations. The Queen's Gallery is an outstanding gallery. If you time your visit right - buy a ticket at the beginning of the year, you can get good value for money by revisiting the gallery on the same ticket during a one-year period.

So this is at the Queen's Gallery? I didn't know Buckingham Palace hosted art shows. London is such an amazing place. I visited twice briefly (and it took me over 20 years between the two visits). Would go there 3-4 times a year if I had my way. 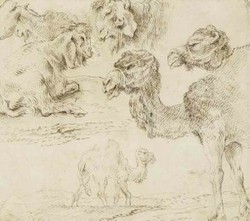 There are three main waterfalls on Queensland's Mount Tamborine - Cedar Creek Falls, Curtis Falls and Witches Falls and they are gorgeous!
46%  4   5 lou16
Queensland