London's Fashion and Textile Museum is offering a rare opportunity to see designs by Zandra Rhodes, many of which have not been seen since their catwalk debut many years ago.

The Fashion and Textile Museum was founded in 2003 by the iconic fashion designer Zandra Rhodes. The museum's tenth anniversary is being marked with an exhibition entitled Zandra Rhodes Unseen. The installation features original sketches, textiles and garments including many items that have been unseen since their first appearance in fashion shows during the 1970s and 80s. The FTM provides a fascinating glimpse into Zandra's archive, studio and creative process and demonstrates why she is still a powerful inspiration to up-and-coming designers as well as to her contemporaries.

Zandra Rhodes at the Fashion and Textile Museum

The Fashion and Textile Museum (FTM) is the UK's only museum devoted to contemporary fashion.  The museum, founded by Zandra Rhodes in 2003, is owned by Newham College London.

The FTM offers a varied programme of exhibitions accompanied by talks and lectures exploring every aspect of fashion, textile and jewellery design.  The museum also has an international reputation for providing training and support to those employed in the fashion industry as well as members of the public interested in fashion and associated skills.  The museum offers affordable courses in pattern cutting, dress-making and computer aided design.

Zandra Rhodes is one of the most well-known personalities on the British fashion scene. She is widely acknowledged for her experiments with colour, print and textiles and her experimentation with her own very vibrant image. Born in Chatham, Kent, UK in 1940, she was introduced to the world of fashion by her mother, a fitter for the Parisian fashion House of Worth, and lecturer at Medway College of Art, a founder college at The University for the Creative Arts. Zandra trained at Medway and subsequently at the Royal College of Art, London.

In 1967, she opened her first London shop, The Fulham Road Clothes Shop, with fellow designer Sylvia Ayton. In 1969 Zandra took her collection to the USA where her daring designs were featured by American Vogue. Her clients included Henri Bendel of New York, Sakowitz, Neiman Marcus and Saks.

In 1975, Zandra established her own shop close to Bond Street in central London as well as a boutique area in Marshall Fields in Chicago. Her Royal and celebrity clients have included Diana, Princess of Wales; Freddie Mercury; Elizabeth Taylor; Shirley Bassey; Diana Ross; Debbie Harry and Kylie Minogue. 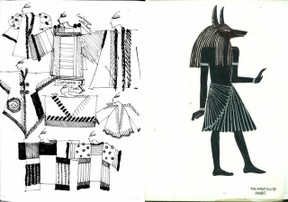 She has also been commissioned to create opera sets and costumes for San Diego Opera's The Magic Flute and Pearl Fishers as well as Houston Grand Opera's Aida. Rhodes' work has featured in numerous exhibitions including Punk: Chaos to Couture at The Metropolitan Museum of Art, New York. (9th May to 14th August 2013).

Rhodes is the recipient of numerous awards including Designer of the Year in 1972 and Royal Designer for Industry in 1974. She received the CBE (Commander of the British Empire) in 1997, a well-deserved public acknowledgement of her contribution to fashion and textiles. She holds several Honorary Doctorates from Universities in both the UK and USA and in May 2010 was installed as Chancellor of the University of the Creative Arts.

This is a unique opportunity to examine Rhodes' archive, studio and design processes and to understand how she has successfully inspired fashion designers for more than fifty years.

The display features daring textiles, glamorous gowns and original sketches from both well-known and lesser-known collections. Many articles are on show for the first time, including the Conceptual Chic collection from 1977-78.

The Conceptual Chic Collection was inspired by London's street culture and the punk movement of the 1970s as well as designers such as Elsa Schiaparelli and Salvador Dali. 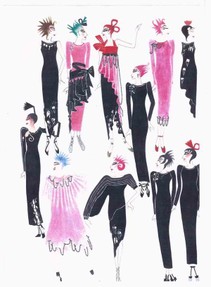 Elements of glamour and punk were combined in garments made from Jersey fabric in shades of shocking pink, bright red, and black. This was Zandra's first collection not to make use of printed fabrics.

The collection had such an impact that she was dubbed the 'High Priestess of Punk'! To the unsophisticated eye these garments, with their seams on the outside, were torn, held together with safety pins, and decorated with sink chains.

Also on display is a full-length, halterneck Punk wedding dress from 1977.

The exhibition explores Rhodes' pioneering work in the field of sustained and supported craft skill projects.   The display includes a colourful selection of embroidered, feathered and sequined dresses as well as fully-beaded garments made in India at a sustained craft project with support from the Indian government.  Beaded details and finishes are a trademark of Rhodes' work and these garments pay tribute to the amazing skills of these workers.

The installation features a beautifully beaded silk chiffon dress with cut-away sleeve detail in silk jersey with matching beaded hem. This is one of Rhodes' first fully-beaded garments from the Fables of the Sea Collection 1984.

Fully Beaded Dress from Fables of the Sea Collection 1984

Photo by Frances Spiegel with Permission from Fashion and Textile Museum

Detail - Fully Beaded Dress from Fables of the Sea Collection 1984

Photo by Frances Spiegel with Permission from Fashion and Textile Museum

Zandra Rhodes Unseen will be open from 12th July to 31st August 2013. Tickets and further information can be obtained from the Fashion and Textile Museum. The exhibition coincides with the launch of the Zandra Digital Study Collection, a joint project between the Zandra Rhodes Studio and the University for the Creative Arts (UCA). The website, supported by Jisc., has been created for use by the education community and anyone interested in contemporary design.

Where is the Fashion and Textile Museum

Discover the Work of Zandra Rhodes

Could You Write for Wizzley?

Join our supportive community and share your knowledge with truly appreciative readers.

Interesting work. The punk ones are as expected, but I'm surprised we don't see variations nowadays. Also like the Fables of the Sea Collection ones -- really beautiful.

Summer art festivals and fairs can be overwhelming with so much to see and do, but proper preparation can help you get the most fun out of them.
Loading ...
Error!