Cats In the House: Honouring the Spirit of OLIVER

He was only with us a VERY short time. (7 weeks) He was adopted from a shelter and cost even MORE money than Ice did.

We thought we were doing a good thing by adopting a shelter cat and after our experience will not do so again. Not because he was sick. Not because we were blamed. Not because we only had him 7 weeks and then he died. NOT because we believe shelter pets shouldn't be adopted. JUST because we decided there are hundreds of free kittens out there in the world that need loving and won't cause us near as much hurt, hassle and cost to our pocketbook. I will NEVER regret Ollie because I KNOW there was a deeper and stronger meaning behind the whole thing. Don't ask me how, I just KNOW.

How He Became Ours

Oliver was the first of the kitties we got to be a buddy for Pester. We bought him from the shelter and sadly we only got to keep him for 7 weeks.  He was a sick kitty and he died. :(  Looking back you notice things you might not have at the time and we think perhaps Pester knew because Ollie was the only one of all of them he actually liked.  He would take the time to play with him! I don't regret the money we spent on him even though his time with us was short because I know that his last days were full of love he would never have had in the shelter.  All he wanted to do was cuddle and he purred contentedly always. My oldest son called him my Ollar Collar because his favourite spot to sleep was around the back of my neck...lol...that is why his name has been tattooed there. :)

The thing is that it was weird from start to finish.

I have always wanted to be a writer and I have many story ideas and half finished children's books I am working on and have been over the years. One of my stories has an Oliver. An adorable black and white kitty with a charming personality.

When hubby and I decided to adopt a shelter cat we went in and looked at a bunch of them and we liked a few of them but "OUR" kitty came up to us looking for love and attention and he was very sweet. The moment I saw him I said to hubby he looks like the one in my story. THIS is the exact look of him!! So we talked about it and we decided that he would be our choice. He was not as feisty as all the other kitties but he was just sweet and charming and I fell in love! So waiting for the paperwork they said we can keep the name he was given or we can rename him whatever we want. So I asked what was his name?

Do you have any idea how many shivers and goosebumps I got when they said, "Oliver".

I mean seriously? Then I KNEW.

Isn't there ever a time when YOU just KNOW?

Oliver was not only meant to come home with us and be loved and appreciated, he was also meant to "nudge" me forward on a path I have feared for the better part of my life.

I have NOT gotten anywhere REALLY on that journey and it has been years since that point but it and he does serve as a reminder that there are stronger forces at work in the world than we can see and sometimes when they happen TO you...you understand. You KNOW.

I trust myself a lot better now than I did then and I am WRITING. Even if it is just blogs and nonsense, every day that I write I get BETTER and that is positive moves forward.

SOMEDAY my story will be fully written and published and the world will know Oliver who has ALWAYS been a part of me and ALWAYS will be.

EVERY day Ollie just sat on me and cuddled or climbed up on the back of my neck and slept there. If I went to work he'd be waiting for me at the door when I got home.

Then we'd cuddle some more.

Our big cat Pester had lost his buddy Ice (hit by a car) and I had been on a hunt to get him a buddy. He didn't seem to be too upset about Ollie. In fact, he'd actually play with him sometimes. That both surprised me a little bit and made me happy, thinking I'd made the right decision. Pester had been sad and lonely without Ice.

Unfortunately, Oliver got sick and died. Looking back you see things that were probably good indicators that things were not right and that he was unwell from the beginning but, we'd never dealt with it before and we didn't KNOW or understand at the time.

He never whined or cried or showed that he was in any pain.

Just cuddled and purred and waited for me to be there with him if I was gone.

He did play, just not really as crazy as many kittens are so we just didn't realize until it was too late.

I was devastated when he died because he became VERY important to me on more than one level.

I'm NOT sorry we had him though because I know he was loved and I'm quite sure he knew it too.

AFTER he was gone...not ONE other kitty we had until we lost Pester as well was liked. He hated them all. He didn't play with them or really interact with them except to be sure they knew he was to be left alone.

OLIVER was special. To ALL of us.

Games He Liked to PLAY

We didn't have him long enough to sort out what his favourite games were but he and Pester used to play around the kitchen table on the chairs. Peek-a-boo...now I'm gonna get you!

When He Was LOST to Us

We don't really know how or why he died.

He just got sick and died through the night.

When we went to the shelter to get some of our money back they tried to blame us by saying we had something in our house that he ingested and it killed him.

I am SORRY but that is NOT true.

My cat Katze was in this same house 14 years.

Ice was in this house for 8 years and then hit by a car.

Pester was with us 5 years and also hit by a car.

EVERY one of the other cats that disappeared did so OUTSIDE of the house and we don't know what happened to them.

All we know is there are fishers and coyotes in the bush and cats risk their lives every day to go outside, not to mention vehicles! If I could keep them in I would but unfortunately there often comes a time when you CAN'T and if you try they become very unhappy.

Point is we had a bad experience and I won't adopt from a shelter again.

I have come to believe that we filled a need for Ollie at the same time he filled one for me and that is enough.

GONE BUT NOT FORGOTTEN:

Thank you for reading.

Okay now, you made me cry. The sign of a great writer is when they make you cry or laugh.

So sorry to hear you lost Oliver. I have rescue cats, and sometimes they are put into rescue because the owner suspects they ARE ill. Our himmie Loolie was.... we were devastated, her sister who had only just been reunited with her was devastated, the shelter owner was.... It was a congenital disorder that would have been present from birth - I believe the breeder KNEW which was why she was put into rescue....

Good luck with your writing! 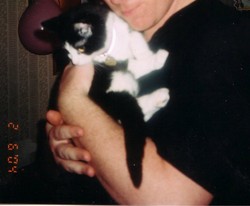