Celtic knots are stylized graphic renderings. The intricacy of these artistic knots have captured the fancy of many for centuries. Learn more about these fun shapes here.

Celtic knots are stylized graphic renderings. The intricacy of these artistic knots have captured the fancy of many for centuries. Stylized decorative Celtic knots have been used to illustrate manuscripts, decorate clothing, adorn artwork and have been inscribed on stone. They are a favorite topic for tattoos. These renderings have symbolic meaning that has attracted people for centuries. Learn more about these shapes and view a Celtic knot picture gallery.

The influence claims the addition of knots to the art of everyday life. Animals, plants and even humans can be seen patterned and interwoven. Wikipedia  states "A fragment of a Gospel Book, now in the Durham Cathedral library and created in northern Britain in the 7th century, contains the earliest example of true knotted designs in the Celtic manner."

These plaits can be seen in artwork around the world. However, the style is mostly associated with lands of the Celts. Eight elementary knots have been identified as the basis for all Celtic interlaced and woven art patterns. These knots were discovered by J. Romilly Allen.

These plaits are combined to form more intricate patterns and shapes. They are also called Gordian Knots or Gordic Knots. The myth holds that only the future leader of the world could undo this knot whereby, Alexander the Great took his sword and sliced it in two.

Celtic Knots for You

Symbolism of the Celtic Knot

The Celtic knot is referred to as the mystic knot or the endless knot. Because there is no beginning or end we are reminded of the timeless nature of our spirit. We are reminded of life and death and cycles of birth and rebirth. The seasons of spring to summer to fall to winter come to mind.

The Celtic knot represents an uninterrupted cycle. It reminds us all of the path we are on and the paths we have chosen. The knots can represent luck and longevity. A Celtic knot wards off evil spirits and bad fortune. The knots are popular as tattoos and tribal tattoos since they can easily be manipulated around an arm or ankle and turned into a band. A Celtic knot or a Celtic knot tattoo acts as a charm and a talisman. It holds individual beliefs and spiritualism in its bands and protects from sickness and evil.

Ideal for a New Tattoo

How To Draw Celtic Knots

I have a Celtic knot triskele tattooed on my back. :) 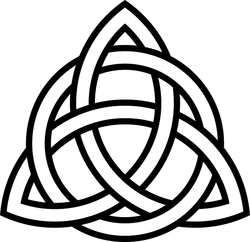 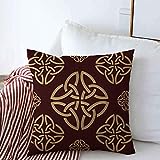