Having trouble showing your characters emotion instead of telling them? Read on to find out how to illustrate your characters' emotions in creative ways.

When creating believable characters, one of the most important things to connect your characters to your readers is character emotion. In real life, we experience different emotions (happy, sad, frustration, joy, hate, etc.) to name a few based on the situations we are faced with, and so does the characters that we make up in our stories.

Character Emotion: What is it?

HOW DO WRITERS SHOW IT INSTEAD OF TELL IT?

The trick is looking into your characters' mind and their story world. What does things smell, sound, taste, and feel like? Involving the five senses is the most powerful way I think writers can connect to their readers. Why? Because just like our fictional characters, we in real life use our senses to discover and evaluate the world around us too.

Throughout my years of writing and researching, I have come across this rule I don't know how many times, but it still rings true. "Show Don't Tell." For those of you who are not familiar with this writing rule, "Show Don't Tell" is a rule that deals with just what it says, showing your characters emotions and actions instead of telling them.

For example, John is angry. This short sentence is a good example of telling a character's emotion instead of showing it.

A better way of showing John is angry instead of telling could be the following:

John's face blushed as red as a tomato, veins vibrating in the temples of his head. Or maybe: John clenched his teeth and balled up his fist before punching a hole in the wall.

I don't know, but the point is to get readers to see the visual images of your characters emotions and actions. Telling every little thing can result in a boring story that readers just don't want to finish. However, showing too much can also slow the pacing of a story and make it seem longer than it really has to be. So how does a writer know when to show and when to tell?

The solution to this is very simple. If a scene is significant to the story then show it, but if it is a scene not very important then tell it. Telling instead of showing has benefits too. It can be an easy way in closing up the tiny gaps within a plot within dragging out all the details. It can also be a helpful tool to use if writers want to include character backstory without the use of a prologue. I have no problem with prologues, but some writers feel they are not needed. Nonetheless, I think it depends on your particular story and plot as individual writers.

Well, this raps up my fifth post. Have fun and write on! 😉

THE NEXT POST: CHARACTERIZATION: SETTING IS A CHARCTER TOO! Want to use setting to show your characters' personalities? Stay tuned to find out how. 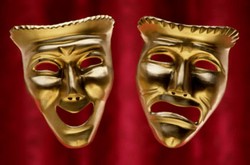 How to Write Realistic Character Dialogueon 10/07/2014

Characterization: Setting is a character tooon 09/22/2014