How to Write Realistic Character Dialogue

Do you want write believable conversations between your characters? Or to show their personalities based on what they say? Read on to find out a few ways of doing this.

Hello, Everyone! It has been a while that I've posted I know, but I've been quite busy writing and planning my own stories. Anyways, let's get back to the post.

There is the saying that 'Actions speak louder than words' but when creating story characters, writers can also use the words and things that characters say and how they interact with one another to make them seem believable to their readers. It's not just a matter of a simple "Hello" Jack said, but it can be considerably more than that. As I stated before, character emotion is a powerful tool that can help writers connect their characters to their readers, and using dialogue is another aspect that can flesh out writers' characters.

How to write realistic dialogue

Writing realistic character dialogue doesn't have to be hard. All writers have to do is know their characters very well,  and get into their characters' heads and story world. Another good thing to do is to evaluate the random conversations of people around you in public places and take notes on different things that you hear them say. Listen to their dialect, their accents, and the differences between them. People in real life talk differently and so should your characters in your story.

For example, shy characters shouldn't speak as much as outgoing characters within the story.

My character Demetrius is an introvert, and Jessica is an extrovert. Here is an example of the differences between characters personalities from a scene I wrote for one of my novels:

Demetrius angled his head and started fiddling his hands with the sugar shaker on the table, barely looking up at Jessica.

“I asked you here… so we could talk,” Jessica said, breaking the silence.

“Talk about what?” Demetrius said, staring at the white grains in the jar.

“You know, you and me?” Jessica said harmlessly.

Demetrius blinked his eyes and timidly glanced up and down at her face.

There was a time that he could easily make direct eye contact with Jessica without any problem, but lately he had trouble with it. She wasn’t the tomboy she used to be anymore, at least not in her outward appearance. Things had taken a new turn. He had no control over what was changing inside of him, and for the first time ever he saw Jessica for what she actually was…a woman, and not just his friend. But he wasn’t right for her, it could never work.

Jessica stirred her straw in her drink again. “There’s something I was meaning to ask you. I…” She hesitated and placed her hands on the table, angling her head. “You’ve been acting differently around me lately. It kind of makes me suspicious.”

“What do you mean?”  Demetrius said.

“Well, for one thing you don’t look me in the eye very much,” Jessica remarked.

Startled by her comment, Demetrius quickly raised his head and looked in her eyes, trying to prove a point. His back muscles and shoulders tensed up, like he had a board taped to his spine. He squirmed on the booth seat. Jessica hinted an amused smile, chuckling. Demetrius was so sweet and endearing that she couldn’t describe him in words.

“Are you okay?” she asked, arching her eyebrow.

“Sure, I’m fine,” he said with a nervous smile.

Jessica sipped some soda from her glass. “About what I wanted to ask, I…” Her mouth remained open for a second, but no words came out. Apparently, she was as edgy about the situation as Demetrius, only it didn’t show through as much.

“Do you love me?” Jessica suddenly asked, blurting out her question.

“No,” Demetrius quickly responded. His heart skipped beats, staring at her disappointed expression. ”…at least not romantically. I mean, you’re like a sister to me,” he added.

Jessica became quiet and sadly looked down. “Oh, that’s too bad because…”

“I love you,” she said with a small smile, placing her soft, warm hand over his on the table.  Her touch caused a shivery sensation to run through his body. He felt like he was wrapped in an electric blanket like the time when he was a kid sick with the measles.

Demetrius gulped, lovingly gazing in her radiant, copper brown eyes that reflected a ray of sunlight, beaming through the side window. You have really pretty eyes, he thought. His cheeks blushed and his heart thumped so hard he thought it would burst out his chest.

As you can see, based on Demetrius' dialogue and actions, he is quite shy about expressing his feelings for Jessica, whereas Jessica, though hesitant, comes out and admits her feelings for him. This alone  is  an example of the differences between two characters, and how body language can be a kind of dialogue to express your characters too.

When I first started writing as an youngster in elementary and started middle school, I used to think that using the word said too many times was a bad thing. This is common among many beginner writers because they feel that using the word said after their characters says something dulls the creativity of their story. Or maybe they might feel they have to use flattering words like admonished, emphasized, or demanded to make their story sound more interesting. But the truth is, there is nothing wrong with using said, and readers don't exactly pay close attention to the said after characters says something, especially since the character dialogue is right in front of the said.

Instead of trying to avoid using the word said, I personally believe that writers should use said as often as possible. It helps the story run smoother without readers having to stop to pick up on longer dialogue words. This is not to say that using words like responded or yelled shouldn't be used at all, but I do think writers should try to use them as little as possible.

For example, if a character asks a question. A writers doesn't have to put asked after the question. Readers will already know that it's a question anyway, and it would probably be better to use said here for the most part. Maybe used asked at least once or twice in a single conversation, but no more than that. This probably should also be done with other words liked shouted, yelled, and whispered too.

Well, this raps up another post for today, and thanks for reading.

THE NEXT POST: HOW TO MAKE A STORY BIBLE 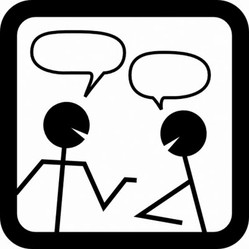 Characterization: Setting is a character tooon 09/22/2014