The annual National Cherry Blossom Festival includes a parade and the presentation of the Cherry Blossom Queen. Learn what not to do by our funny unexpected experience.

On this page you will find current information about the National Cherry Blossom Festival.

You'll also find a personal, and I think funny story with some pictures from our visit to Washington DC on what turned out to be the weekend of the National Cherry Blossom Festival parade.

Though this page is written with a bit of humor, it also provides helpful information if you are planning to attend the National Cherry Blossom Festival located in Washington, DC.

by Claudia Meydrech aka happynutritionist
New on Wizzley: March 2015 Updated 5/8/18

Link for the most current information

Each festival ends with a parade and introduction of the Cherry Blossom Queen.

Visit National Cherry Blossom Festival for the most current information.

Here is Our Story! Planning a Visit to Washington DC

Our anniversary is on April 7th, and my husband loves politics and our Nation, so for our 25th wedding anniversary I thought he would like to visit Washington DC. He had been there on business, but never to just visit and tour. I did all the planning knowing he would love seeing our Nation's capitol and all the wonderful monuments.  Having been raised in Colorado, he didn't have as many opportunities to visit as I did while growing up.

I THOUGHT I was planning during a time of year when it was "off season" because it was still quite cool in early April. We would go, there would be no crowds, we would wander the quiet streets together, and visit sites and monuments to our hearts content.

BUT that's not quite how the weekend went.

Our Story is a Bitter-Sweet Memory Now

But it still makes me smile!

My dear husband passed away suddenly in the summer of 2017. So I am filled with many memories to sustain me in the years to come without him. This page published a few years ago was nice to come back to and remember. We would have celebrated our 39th anniversary on 4/7/18.

What Are They Inflating Balloons For? 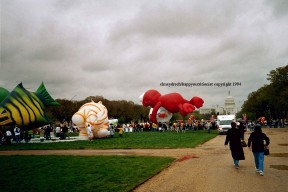 The morning after we arrived in Washington DC we got up and enjoyed a nice breakfast. We stayed out of town in Virginia, and drove into Washington DC after our breakfast.

The traffic was heavier than expected, and when we arrived, we found a parking spot that meant we would have to do a bit of walking. As we walked we saw balloons being inflated, and said to one another “I wonder why they are inflating balloons? I guess something is happening today”.

Have you ever attended the National Cherry Blossom Festival?

What? Police on Horseback in front of the National Archives?

This is when it began to sink in...almost 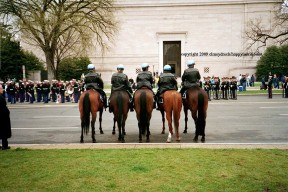 We kept walking to the National Archives. We wanted to view the the Declaration of Independence, the Constitution of the United States, and many other historic documents preserved inside this building.

But when we saw this view of police on horseback in formation standing facing the archives, we realized that something big was about to happen.

Even as I type this, I still can’t believe that we weren’t aware of the show we would be seeing before we could enter the National Archives.

A Conversation with the Police

We were still too "thick" to get it right away

When we got to the National Archives, crowds of people lined the streets, and we figured we’d walk up the steps and go in and visit the Archives, then come out to see what all the fuss was about. When we got to the door, it was closed and there was a police woman guarding, in fact there was quite a bit of security all around…but we started toward the door and were stopped by the police woman.

Police Woman: “No one can go in until after the parade”.

Police Woman: “The Cherry Blossom Festival parade…don’t you know about the parade?”

Us: “How embarrassing, no we didn’t, until just now”.

We turned around, and looked, and then understood why we had seen Elmo from Sesame Street being inflated along with several other balloons earlier in the day.

Yes, this event is way up there on our list of embarrassing moments.

We were not able to enter the Archives until a couple of hours later when the parade was over, and when we entered, it seemed that all the people that were viewing the parade joined us. The line to see the precious documents was a LONG one, but it was an awesome moment when we finally were able to view the Declaration of Independence, and see the signers handwriting for ourselves. To see the Constitution of the United States, and many other documents.

We are on the steps of the National Archives...waiting, watching :-)

Facts about the Cherry Blossom Trees from their Caretaker

I listened as these facts were shared by him on Television

The wife of the Mayor (Mayor Yukio Ozaki) of Tokyo, Japan gave the original Cherry Blossom trees to First Lady Helen Taft as a gift of friendship on behalf of the people of Japan in 1912.

144 cuttings were taken from the original trees in Washington DC and sent to Japan, coincidentally, a few days before the earthquake in 2011. These are grafted to their trees to keep up the "lineage".

If you would like to read the full more accurate history of the cherry blossom trees, visit this link.

Grow Your Own Cherry Trees from Seeds

Here are Video Highlights from the Parade in 2018

The Queen of the National Cherry Blossom Festival

A new Queen is crowned each year of the event

At the end of the parade, the crowned Cherry Blossom Queen makes her appearance.

You will see that the Queen in the float in the picture below is dressed in traditional Japanese attire.

Looking Back, it was All Worth It

Think of all the funny as well as special memories we would have missed?

I have only a few photos from the actual Cherry Blossom Festival parade, and it is fun to re-visit. In spite of the fact that we may have preferred a less crowded visit to Washington DC (it was busy all weekend!), think of the memories and the laughs at our poor planning that we would have missed…and the lessons we have learned about planning ahead as a result.

But if we had planned our trip to Washington DC carefully, we may have been tempted to avoid the crowds, and would not be able to say that, yes, we have seen the beautiful Cherry Blossom trees in bloom in Washington DC, and have attended the Cherry Blossom Festival Parade.

A parting shot of us...can it really be that long ago...and yes, we are freezing cold and trying not to laugh.

But the cherry blossoms are beautiful, arent they? We would have celebrated 40 years of marriage April 7, 2018

For the best places to view Cherry Blossoms and much more, click here for a PDF map and brochure put together by the National Parks Assn.

Suggested locations for the most concentrated number of trees:

Do you have Cherry Trees growing where you live? Say hello, I'd love to hear from you.

@dustytoes I think the Washington Cherry Trees get most of their attention because they were a gift from Japan. We also have a park in NJ, Brookdale Park, that has amazing Cherry trees and blossoms.

I do have cherry trees growing in my yard, but I think they are a different type. I'd love to see the Cherry Blossoms in Washington, but I've never visited the nations capital.

@CruiseReady It was definitely eventful! And yes, the blooming of the Cherry Trees there is quite a sight to see..we have a park here in New Jersey not too far away that also has many Cherry Trees that bloom each Spring.

I don't think cherry trees grow around here. Must be too warm. It would be lovely to see one in bloom some day. Glad your trip turned out to be more eventful than intended. It will be more memorable that way!

It was fun! Yes, the DC Cherry Blossom Festival has been going on for many years...but as you can see, I forgot the timing myself...lol

Happy 36th anniversary :). It sounds like you had a great time in DC :) I didn't know DC had a cherry blossom festival. Nice history to it, too!

Thank you! We have yet to get away and celebrate, maybe in May this year. Glad you enjoyed the story.

Happy belated Anniversary.Enjoyed reading your story and the surprise with the parade.

That is for sure! I would like to go again...at a quieter time of the year :-)

Well, it certainly made your trip even more memorable than it would have been.

While I watch hummingbirds at my feeder each summer, others watch them up clo... 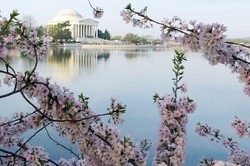 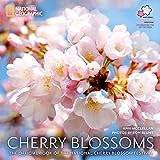 Many travel the country roads of New England leaf peeping in the fall when the colors are beautiful, but New Jersey is also a beautiful place to enjoy fall foliage tours.
100%  27   23 happynutritionist
Wild Birds 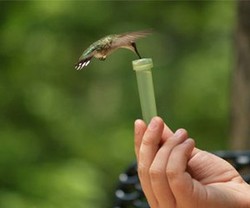 While I watch hummingbirds at my feeder each summer, others watch them up close by hand-feeding them. I hope you enjoy this information on feeding hummingbirds by hand.
Loading ...
Error!