Now, we have had a good weather day for a day out here in the "frozen north" of an English winter, I continued my "Cheshire days out " today with a visit to my favourite Zoo.

Chester Zoo is at Upton just outside Chester, in Cheshire .It was opened in 1931 by George Mottershead in what was a village outside Chester but is now part of that old Roman city.

George had a passion for animals from his childhood and despite being injured in World War 1 he was determined to start his own zoo. Initially the villagers of Upton were opposed to the venture until they saw some of the animals. George wanted to build a zoo that was different from others at the time. He didn't want cages for the animals; he wanted moats and ditches to separate the animals from the public and wanted large open areas for them to feel freer than animals were in other zoos.

In 1986, in line with British laws some animals had to be enclosed by fences.

The zoo has undergone major improvements and is now a centre of excellence in animal conservation.

I went there today with my family as a birthday treat for my husband and grandson. This just goes to show that there is something at Chester Zoo for all ages.

My grandson was fascinated by the giraffes.  There were all ages and heights of giraffes and people were interested in the massive ruler on the wall.

Can you see the Cheshire blue winter sky ? Ha!  most days a North of England winter sky isn't like this.

The tropical realm is a beautifully designed and very warm building. There are cascades of water down the sides of large rock faces to simulate a jungle atmosphere. There were some beautiful birds that I had never heard or seen before e.g a White Crested Turaco

I am fascinated by the idea of camouflage  and how nature protects its animals. Some birds were quite difficult to see but I caught this one ( above ) on camera.

I especially like this zoo because it is home to animals that I have never heard of. This appeals to me as a learning experience.

The big cats as always were a major attraction. This lion made me think of Aslan in "The Lion, The Witch and the Wardrobe". His mate was close by scowling at other lionesses. It made me wonder if animals aren't that much different to humans in the jealousy stakes. :)

The Zoo has several quirky pathways that the children love ; and adults too. This covered pathway is made out of withys ( willow sticks ) .

Two interesting animals caught my eye. This is a  Red River Hog and I was fascinated by its ears and wondered what had happened evolution -wise for them to develop these ears.

And the tail on this lizard was SO long !  Again I wondered how it had developed that way through time and evolution.

Of course Penguins are amongst everyone's favourites . Initially I caught them swimming on the water. funny, joyous.

But then came my favourite photo of the day. It took me ages to get it as the penguins, funny and ungainly on land,  are magnificent in the water,  quick and streamlined.

My favourite photo of the day.

The realm of the red ape

The Realm of the Red Ape was very popular and it was difficult to get to the windows to see these creatures.  When we managed it though it was a wonderful thing to behold. They are more beautiful than I had expected.

Hints of Celtic past

This has always been a complete mystery to me.  Coming from a poor background as a child, the idea of throwing coins into water is unfathomable to me. We wouldn't have wasted a penny.

But wherever we go in England,  if there is a pool of water like this, people throw money in.  Why ?

I think it is harking back hundreds of years to when Celts and Saxons threw silver and gold into water to please the river gods.

A waste of well earned cash to me . Does this custom happen elsewhere ?

If you have a chance to visit Chester Zoo, please do. It is a very educational, informative and lovely place.

Below is the aerial monorail that goes around the zoo.

Frank, why change the habits of a lifetime ? :)

I have never thrown coins into water, because, as you know, I like to hang on to the pennies.

That is very interesting and thank you for the comment. I am glad it went to charities,

I also do not subscribe to superstition. Money was very hard come by during my childhood and we wouldn't have thrown it into a well ! It was for food, heat and social housing rent.

Nice images as usual.
As for coin tossing, I recently read the last time parts of Niagara Falls were blocked and drained for construction quite a large sum of money was recovered and given to charities. The plan is to again do work there, and I expect the same. Even in fountains in shopping centers there can be seen change. And it is probably based in superstition, which I do not ascribe to.

There was a drama serial recently on BBC about the Mottersheads and the building of the Zoo at Chester. IT was fascinating.

I don't know if the money is collected. I assume it is and I do so hope it is given to charity thereby giving it a useful purpose. There is always money in ponds at Attractions and I do think it is a harking back to old Celtic British beliefs. There was no notice by the ponds to say that the money is given to charity. People in Britain throw coins in the ponds for some reason.

Veronica, The animals look healthy, the sky looks very blue (not at all like the way winter skies have been of late), and the surroundings look appropriate, clean, and supportive to wildlife. It's a beautiful idea, and it's wonderful that, years after George Mottershead took a giant step for wildlife-kind, people still appreciate the concept.
Is the money never collected from the wells? I know of similar sites in North America where there's regular clearing of the coins by the owner-operators.

Yes ty. It is a lovely zoo and the animals do look well cared for there.

I've seen these wells in many places. The story I know is that you throw a coin with the wish to come back :)
Nice zoo, btw.

Yes I firmly believe that this is from where it originates, even thousands of years later . I know where it is from.

My point is ...Why ? As so called sophisticated and level headed as we are ... and it is a time of terrible financial strain in the UK, people still chuck coins into water. Our family was very poor in my childhood, and I know we wouldn't have done. And still don't.

In the section "Just Why?" you ask the origin of throwing coins into the well. The custom of throwing valuable objects into lakes or bogs seemed to have originated in the Bronze Age,so there are many valuable objects that are found in lacustrine and palustrine deposits. The custom is found in legend. Think of Bedevere's throwing Excalibur back into the lake after Arthur died. The Lady of the Lake who took it back is the Great Goddess.This is a far cry from our wishing well, but the wishing well is a descendant of a more ancient practice.

Cheadle Hulme ( Pronounced Hyoom ) is my village and 7 years ago I wrote a Ch... 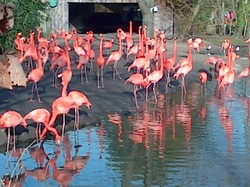 This morning I have been up Tegg's Nose! That sounds fairly disgusting but it was a delightful experience.
75%  9   7 Veronica
Travel & Places

Cheadle Hulme ( Pronounced Hyoom ) is my village and 7 years ago I wrote a Cheadle Hulme History Walk and took photos.I have updated it today.
Loading ...
Error!