This morning I have been up Tegg's Nose! That sounds fairly disgusting but it was a delightful experience.

The very name Tegg's Nose ensnares the imagination and the first time I heard it I had to know what this was all about. There is something about Tegg's Nose Country Park, Macclesfield, Cheshire which draws me there when I need some space, some peace, some thinking time. It is an easy climb, a family walk and can be used as a start of several walks around the wonderful Macclesfield Forest.

So what is Tegg's Nose? Tegg's Nose is a hill to the East of Macclesfield in Cheshire. It does not qualify as a mountain, too short and has a high peak of 1246 feet . It is to the West of the England's Peak District. A Tegg is the Old English word for a sheep aged older than a lamb but younger than a fully grown sheep . The name has a Saxon / Viking sound to me. A Naze ( Nose ) is a promontory, a high land that juts out into the landscape. Hence Tegg's Nose takes its name, a sheep promontory.

Today I took some photos along my walk.

Believe it or not, I live just a few miles from here. How blessed am I !

The quarry was for millstone grit, Cheshire stone and the long walking trail through Cheshire is called the Gritstone Trail. It was opened in 1978.

We drove up to Tegg's Nose through winding mountain roads and as I drove I could sense myself start to unwind after a hectic time recently. There are so many shades of green that a paint palette couldn't even begin to capture them .

As I approached the car park, I saw this sign. This boded well as I like nothing better than to finish a good walk with a cup of tea.

The Walk Up and Down

On the walk the first thing I noticed today was the heather. The purple is always beautiful on the hill side but today the different shades, leaning back and enjoying the warm sun, unusual for North West England, today the shades of heather were just spectacular. Every shade of purple regally vying together for our attention. As you can see the variation of shades in the lovely sunshine and air was just stunning.

Nature just knows how to put shades of colour of together to perfection.

Along the walk, and up the steps, the sheep were grazing peacefully and the steps do make this steep slope very passable for even the most vulnerable walkers.

Whinberries, a delicious, small, wild blueberry grow naturally on Tegg's Nose slopes. They are freely available to forage for and pick and we pick them and make cordials, jams, jellies and pies.

Many have already been picked but there were still a few thousand left !

Apart from sheep farming on the Nose, it was once also a site of the quarrying industry. Information boards give details of the history and there is a small display of machinery as a tribute to the harsh life and work those men endured. They quarried for Millstone Grit.

There are several reminders of where we are along the way.  The views are just beautiful. Once again the shades of green are soothing and resplendent in the weak sunshine. My favourite viewpoint of all is below, just off the path, a little alcove amongst the trees. In my opinion, this is God's county.

As we approached the top,  these are the sights that met us. I love the cool breeze in my face and blowing my hair. I find it exhilarating and empowering. The air is quite special and taking in great gulps of air is very refreshing. I love the viewing board which tells us what everything is on the skyline.

Spot the heather along the way.

The view from the top

Although not a high climb, the view is stunning from the top. In the far ground the dark Welsh mountains are quite visible. World famous telescope Jodrell bank is also there on the Cheshire Plain in the middle ground.

Down again to the cafe

It is a short climb and well worth it for that view.

Down again and there are more signs of where we are.

Teg himself points out that he is just a one g Teg and not a sheep which had two G's!

These new Tea Rooms are perfect for when a walk is finished. Spotlessly clean and with homemade cakes, my husband said the Chocolate Brownies here are the very best he has ever tasted and we like our afternoon teas in our family. The tea was proper tea too not a Tea bag, proper tea. Teg and Laura are lovely and we hope they do well. They deserve to ! There is a lovely wall display about the area and also a log burning stove for when it is cold.

If you have an opportunity to visit Tegg's Nose then do so. It is a lovely place with walks of all difficulties and grades, the best scenery and a lovely cuppa at the end as a prize for your physical efforts.

I have added the photo above as I saw it today on my day out. I add it because it has a very very old spelling of Macclesfield from when back in the days that "s" was written as an "f " .

This stone must be so old.

The steps in the picture are for going either up or down.

Millstone grit has had many industrial uses including, grinding stones for corn, road fillers and roofing materials.

Veronica, Thank you for the lovely pictures and walkabout! Are the railings on the steps for people going up or down? Is the heather pickable? What was millstone grit's prime use in the area?

Spelling and scripts were not regulated then though and often depended on the literacy of the writer. .... which is yet another aspect of social history.

interesting, as I have seen the f without the bar in eighteenth century texts. The script must have been changing.

No I have found the newsprint of the Stamford Mercury in 1716 has the word Messenger as Meffenger .... two f ; and again in 1722, the Lord Chancellor was created Earl of Maccleffield.

Therefore, the spelling of Maccleffield was known.

I have met writings in which the letter s is formed as an f from the sixteenth and early seventeenth century.However, they distinguished the two as the s had no bar on it, unlike the f, so I suspect that the engraver made a little mistake and it just had to stand.

Picking whinberries today I saw the above wayside stone.

I have added the photo above as I saw it today on my day out. I add it because it has a very very old spelling of Macclesfield from when back in the days that "s" was written as an "f " .

This stone must be so old.

Whinberries are very small and sweet, delicious. We pick them and use them in cordials, jams and crumbles.

Billberry is one of six related species in the genus Vaccinium. Whinberry is the same species as bilberry, Vaccinium myrtillis, but may be a distinct variety within the species. Variety is a classification level equivalent to a subspecies, but unlike a subspecies, which is often localized to an area, it is widespread. Blackberry has even more variety, for there are scores of localized varieties in the one species.

The Stockport Riots of June 1852 made national and international news and wer...

Edale is a beautiful village in Derbyshire, ( pronounced Darbishur ) England. I visited it today with a special friend, someone I can be myself with and tell anything to.
75%  31   5 Veronica
Culture and Society 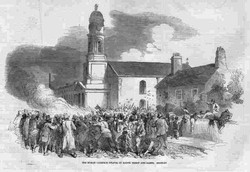 The Stockport Riots of June 1852 made national and international news and were based on racism and religious bigotry.
Loading ...
Error!