The 50th anniversary of America's Voting Rights March occurs in 2015. Trace its troubled beginnings in first-rate venues dedicated to Rosa Parks and others who made it happen.

Montgomery once lowered its head due to the racial turmoil that occurred here 50 years ago. Today, the city has a stronghold on the Civil Rights Movement attractions and showcases first-hand the injustices once done to mankind, based on skin color.

Begin an uplifting historical journey in this city nestled alongside the Alabama River at the Rosa Parks Museum. She’s the mother of the movement and revered for refusing to leave her seat and go to the back of the bus. And don’t leave Montgomery without winding through the hallways of the Civil Rights Memorial Center. 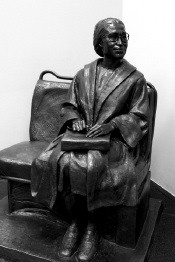 The Montgomery Bus Boycott of 1955 transformed into the Civil Rights Movement thanks to Rosa Parks, a 42-year-old, black seamstress. This genteel woman was on her way home from work and sat in the middle section of the bus. When told by the driver to give up her seat to a white passenger, Parks refused. "I don't think any segregation law angered black people in Montgomery more than bus segregation. It was humiliating," Park would later say about the injustice that kept her in the seat.

Today, the chilling stillness caused by that injustice can be felt in the Rosa Park Museum as visitors are introduced to Parks and the movement during the introductory film shown at the entrance.

"Everybody knows it. If you are colored, you don't take a drink from a white water fountain. Can't eat in a white restaurant...know your place," says the film's narrator as photo after photo is projected above.

In others rooms, visitors will see a replica of the bus; read the pamphlets that encouraged Montgomery residents to boycott the buses and see cutting-edge exhibits. The voices of people involved in the Civil Rights Movement resonate throughout. Expect to stay longer than anticipated in this wonderful tribute to a courageous woman who set America straight.

Absorbing the human toll, suffering and impact of segregation in America before the enactment of the Civil Rights Movement and human rights, in general, are best experienced in the Civil Rights Memorial Center. Opened in 2005 and part of the Southern Poverty Law Center, its focus is to fight for all members of society through litigation, teaching tolerance, tracking hate groups and even extends to immigration and LGBT issues.

However, it's the Center's haunting stories of slain black people in the south that remains long after the visit is over. The exhibits are exceptionally well done, many covering the walls of winding hallways. People come from around the world to learn about America's Freedom Riders and Civil Rights Movement martyrs. There's also a 56-seat theater, a classroom for educational activities, and the Wall of Tolerance.

Outside, a large, circular black granite table stands with water emerging from the table's center that flows gently down its sides. Designed by Vietnam Veterans Memorial designer Maya Lin, on it are inscribed the names of Civil Rights martyrs. It's possible for visitors to touch the table and run their fingers across the names. The Memorial is located on an open plaza accessible to visitors 24 hours a day, every day of the week.

Upstairs at The Dexter Avenue King Memorial Baptist Church is where its active congregation still hold church services. But it's downstairs in a large room where a colorful, 10-foot-by-47-foot mural covers the length of one wall and depicts important events of the Civil Rights Movement. It was painted by John W. Feagin, the church's deacon and finished in 1980.

There’s a heavy concentration on Martin Luther King, Jr.’s milestones from the bus boycott to his death April 4, 1968 by an assassin at the Lorraine Hotel in Memphis, Tennessee.

Interspersed on the mural are prominent figures such as Alabama’s Governor George Wallace, a segregationist, who was against the boycott. Hooded Klu Klux Klan members are shown as is President Lyndon B. Johnson presenting Dr. King with one of the pens he used to sign the Civil Rights Movement act.

For Montgomery visitors short on time but would like a recap of the movement, this mural is the answer.

Montgomery is Alabama's capital reaping rewards for a massive renewal from convention center to baseball team to trending restaurants. The Alley is a revitalized downtown area filled with bars and restaurants and a short walk from the Montgomery docks beside the Alabama River.

The Renaissance Montgomery Hotel & Spa at the Convention Center is the newest hotel in town and across from the Hank Williams Museum.

I agree. Montgomery has made an admirable effort to preserve the landmarks.

History has many such incidents, interesting to see that the landmarks and monuments are conserved for future generation's to ponder and retrospect.

Hi Digby, Thanks for the comment. Visiting Montgomery was a favorite trip of mine. I never really thought much about all that occurred during that period in history. What an education I had. I plan to do a few more Montgomery articles over the next few days.

This all is so interesting. I would love to visit these places. 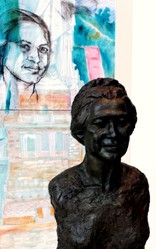 A Testament of Hope: The Essential Writings and Speeches of Ma...
21%  0   3 JudithG
Alabama