Classic North Indian chai is based upon distinctively flavoring black tea with a medley of spices to yield the subcontinent's regionally-varied class of tea, masala chai.

On the Indian subcontinent, chai ("tea") is not traditionally a beverage of tea bags doused with water and milk and possibly sweetened. Classic North Indian chai encourages customized gustatory and sensory experiences of the hot, loose-leaf beverage via preferential selections of spices.

There is no standard recipe for masala chai ("spice tea"). The spice mixture varies by many factors, such as by region, by family, by occasion, by purveyor.

The traditional preparation calls for boiling the ingredients. Flavors of spices and tea leaves are dispersed by decoction (Latin: decoquere, "to boil down"; de "from" + coquere "to cook"). Spices and tea leaves are strained as the concoction is poured into receptacles: cups or glasses for drinking; teapots or other storage vessels for serving.

Our favorite water-milk proportions range from one-to-one to one-to-two, depending upon desired creaminess. We tend to select plant-based milks. We especially enjoy almond milk, cashew milk and coconut milk.

Our spice medley tends to center on the traditional medley of cardamom pods, cinnamon sticks, cloves, ginger and black peppercorns.

For sweetener, we gravitate toward honey varieties. If we opt for sugar, we always go with Demerara. In my sister's travels across India, she became fond of sweetening either with date palm (Phoenix dactylifera)-based jaggery or with local honeys.

My family and friends drink North Indian masala chai in the traditional way, in small (6- to 8-ounce) glass tea cups.

Pour water into a medium saucepan. Bring to a boil over high heat.

Reduce to medium heat. Add tea leaves and spices to water. Boil for 2 to 3 minutes.

Add milk and sweetener. Allow to simmer for 2 to 3 minutes.

Turn off heat. Cover saucepan with lid and allow to steep for 10 minutes. (Note: 15 minutes or longer to increase tea strength.)

Filter tea beverage by pouring into small (6- to 8-ounce) glass cups via a fine-mesh sieve.

My special thanks to talented photographers/concerned organizations who make their fine images available on the Internet.

Amazon's Choice as highly rated and well-priced product. This product is eligible for Amazon Smile donation.

Amazon's Choice as highly rated and well-priced product. This product is eligible for Amazon Smile donation.

Suvir Saran @suvirsaran. "It’s a holiday and the weather is perfect to stay in and enjoy some crispy and crunchy fritters with hot masala chai. All you need to do is, swipe left, and read this super simple cabbage fritters recipe, give it a try, click a shot, and share with me by tagging @suvirsaran Have a blissful and tasty Tuesday, our 72nd #RepublicDay! Also, thank you my dear @smritiiraniofficial for keeping us all eating #Local4Poshan and #Seasonal4Poshan and celebrating #Indian #heritage and flavors. Photo shot and styled by @bhukadinsan." Facebook. Jan. 26, 2021.

Over 80 inspired recipes include Farmhouse Chai, an enticing masala chai from an upstate New York farmer-cookbook author-chef, born in New Delhi and formerly based in New York City.

Glass cups aesthetically capture aromas and flavors of beverages such as North Indian masala chai. This product is eligible for Amazon Smile donation.

katiem2, Thank you for the surprise visit. It's always pleasant to be visited by you and to hope that you'll have another one of your educationally entertaining, entertainingly educational posts.
Like both grandmothers and like my father, I appreciate a good cup of chicory or coffee. But chai is something that my family also passed down to me and that my sister Stessily perfects, from the family recipe and from having been there, knowing India like the back of her (left, writing) hand ;-D.

Perfect time of year for a warm delicious cup of Indian Chai. :) Thank YOU!

frankbeswick, I agree with you about pateluday's insight of tea added to milk.
Also, your input on tea's designation sometimes as char and char's chai etymology is indeed interesting.

Milk would be linked with the importance of cows in India. We had always thought that milk was added to tea; your suggestion that tea was added to milk is insightful.
Tea is sometimes known as char in Britain. Obviously, this word derives from the word chai.

Veronica, Your water-milk proportions of 4-to-1 (8 ounces water to 2 ounces milk) mirror my UK-style of tea. As with you, I favor a black tea blend. In the evening, I sometimes like to experiment with herbal tea varieties.

pateluday, Thank you for your insights. As you point out, who borrowed from whom is anybody's guess. Both countries, nevertheless, display admirable appreciations of tea.

Before British popularized tea in India, the standard breakfast drink was milk. Probably Indians started add milk in their chai because of this habit or borrowed it from the British it is anybody's guess.

Derdriu
I cannot start the day without 2 cups of our tea.. I have just checked in my kitchen . In a 10 Fluid Ounce cup of tea, my proportions are 2 fl ozs of milk the rest is tea . In our house we have a black tea blend.

Veronica, Thank you for your gracious comments. The water-to-milk proportions vary, according to preference, but, no matter the proportions, the taste is still enjoyable.
I appreciate your compliment on my acknowledgment of photographers who generously share their works. Their sharing makes my Internet life easier and also attests to the infinite variety of life's interesting wonders.
I also appreciate that you noted my source list. Both Anupy Singla and Suvir Saran have justifiedly stellar reputations. Anupy Singla previously was a respected journalist, so we are all benefiting from her career change.

LPerry, Almond milk and organic honey enhance North Indian spiced tea's smoothness, and their delicious healthiness is another plus.

Shakshuka is a Mediterranean dish of eggs poached in a spicy tomato sauce. 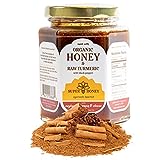 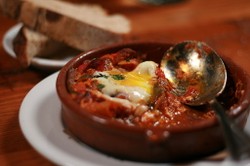 Shakshuka is a Mediterranean dish of eggs poached in a spicy tomato sauce.
100%  14   11 DerdriuMarriner
Indian Food