Mattel's "Kiddles" were popular dolls from the mid-60s to the mid-70s, and seemed to get smaller (and stranger!) as the years went on. Behold, "Jewelry" and "Zoolery" Kiddles!

The Mattel Company was one of the most popular and prolific makers of toys in the 60s and 70s and is still a dependable brand name today. The toys that this company produced were always interesting, original, brightly colored and loaded with character. Just a quick glance at the boxes for Mattel toys reveas a difference between any toy-manufacturing competitors.

In the early 60s Mattel launched a new line of toys that were meant to complement the unmatched success of "Barbie." These were the "Kiddles."

As the 60s wore on some interesting things happened with Kiddles...they got more colorful, they got weirder...and they got SMALLER. Two of the "end of the line" Kiddles that I always found fascinating were the tiny "Jewelry" and "Zoolery" Kiddles.

The Definitive Guide To All Things "Kiddle"

1) A brief history of the Kiddle

Kiddles were an offshoot of the successful Barbie doll line that had been going since 1959.  Whereas Barbie was seen as a young woman that girls could dress up and possibly try to emulate, "Kiddles" were designed for younger girls.  The dolls were small, usually around an inch and a half, and were portrayed as younger than Barbie, her friends and cousins.

Initially "Kiddles" were portrayed as active, realistic girls and came with accessories like bicycles, a TV or a hairbrush. Most of them were cut from the same general pattern; they were fair-skinned, had large heads and small bodies and a thick mass of hair.

What really separated them from any competitive "little" dolls were their exquisitely designed eyes and faces.  Their eyes were painted with a lot of detail, including different colors and highlights, and the overall personality of the faces was a little suggestive, a sidelong, "come hither," demure glance that was instantly recognizable.  In fact, they pre-dated the "little girl pageant" phenomenon by some years as most little Kiddles were clearly sporting 60s fake eyelashes and mascara.  The look might be a little disturbing today but wasn't much of a big deal at the time.

2) The next "waves" of the Kiddle line

After exhausting most of the possibilities of portrayals of active little girl life, the designers of Kiddles began to explore different variations on the original themes.  There were "Kiddles N' Kars," featuring young girls (or miniature women?) sporting bee-hive hairdos and seated in a "horseless carriage," "Skediddlers," which were walking dolls that came with a plastic mechanism for making their legs move and "Kozmic Kiddles," aliens from outer space that I wrote about in a companion article.

One of the most successful variants was the "Kologne Kiddle."  Just about every girl from the late 60s or early 70s I've met seems to have had one of these or knew someone who had one.  The "Kolognes" were smaller even than their sisters, usually around an inch tall.  They were dressed in incredibly ornate, detailed skirts, had hair, clothing and make-up in green, blue and orange colors and were lodged in clear-plastic perfume bottles scented with flowery aromas.  The fragrance was strong and is instantly familiar to anyone who was around these toys as a kid; many of the dolls still retain their smell 40+ years on.

I never quite understood the logic of "Kologne Kiddles;" there seemed to be something a little sadistic about how these painted-faced young girls were sealed into plastic bottles with that strange perfume, but I accepted it in a sort of "I Dream Of Jeannie" way.  My sister's dolls certainly didn't seem to LOOK unhappy and they were an intriguing sight lined up on a bookshelf.

Around the same time came "Lucky Locket" Kiddles, which were similar in theme to the Kolognes except the dolls were trapped inside thick plastic, flower-framed locket bubbles that a child could wear around her neck.  The dolls came in different colors and styles including some ethnic variations.

I've often wondered whether it was the influence of artists like Peter Max in the 60s or if the designers of Kiddles were just getting bored, but from there the Kiddles got more strange and, to me, much more interesting.

The next wave of Kiddles was the "Jewelry Kiddle" line.  These were dolls that were tinier STILL than their Kologne sisters, measuring under an inch tall sometimes.  Their bodies were the size of your pinkie finger and their heads the size of a marble. These dolls were housed inside plastic "jewel" casings with flower trimming that a child could wear around her neck or on her finger, similar to the dolls' Lucky Locket cousins, but they were about half the size and much more...colorful.

Despite their size, quality was not compromised; they still had a lot of tiny lace and bead detail in their dresses and on their faces.  But there was something...different about the Jewelry Kiddles.  Their faces were painted in designs that look similar to Japanese anime cartoon tradition, a standardized pattern with big blocks of color, the eyes taking up 1/2 of the face and the mouth a tiny slit below. The color scheme was "anything goes," or perhaps, "The crazier the better."  Typical of a lot of psychedelic/go-go-inspired 1960s artifacts, greens, blues, oranges, hot pinks, yellows and blacks are mixed willy-nilly to form a neon kaleidoscope of color that wouldn't look out of place at some sort of Jimi-Hendrix "happening."

It's hard for me to imagine the designers of these toys were thinking of active little girls--or human beings, for that matter--when they designed these tiny things.  They seem like visitors from some future system where people have been shrunk to control population problems, and maybe have lost their ability to see anything but bright colors!

The Zoolerys were actually a step in a more conservative direction than the wild designs of the "Jewelry" line but no less perplexing.

There were four Zooleries: a panther, a lion, a monkey and a bear.  Each came in a tiny cage that a child could wear around her neck on a chain.  One could also roll a caged Zoolery across a smooth surface. You could open the cage and let the creature out to play (but don't get bitten!) or connect the cages together and make a chain.

The plan at one point seems to have been to introduce a whole line of "circus" Kiddles that these may have been part of but that's the only "Konnection" I can find to the original Kiddles.  With their heavy eyeliner and come hither smiles these small animals look like hybrids of some kind, as if the evolution of the Kiddle ended with them morphing into animals with human faces.  One can only guess where time would have taken these strange plastic children if the line had continued!

All Kiddle life was basically extinguished in a strange purge that happened around the mid-70s.  It's not clear what caused the mass-extinction...either it was simply that little girls who had played with these dolls grew out of them and new generations didn't find them interesting or, as some have speculated, Mattel got into trouble because of children eating the toys, and choking.

It's true the dolls were unbelievably small and rather edible looking, yet I don't believe the similarly commestible-appearing "Polly Pocket" line caused much trouble in the 80s.

Kiddles continued to show up from time to time through the late 70s as stores attempted to sell off their stock and the brand name has been revived on occasion but there's never been a true resurgence in Kiddle popularity.

Having said that, Kiddles are still a hot item on eBay and can "Kommand" prices in the hundreds for a 45 year old doll made of plastic that is less than an inch tall.  Kiddle magic still seems to intrigue for Baby Boomers and associated generations of fans and interest doesn't seem to be slowing down quite yet, which makes me wonder...

...perhaps I was right about my alien theory all along:  Kiddles were sent here to "Konquer" the world!

Oh cool, glad I brought back some memories! I love that feeling for some reason... :)

Wow, this page brought back some memories. I loved my Kiddle ring when I was little! I hadn't heard of the zoo version, though--I would have eaten that up too!

Every now and then an unusual toy surfaces that stands out from the crowd mor... 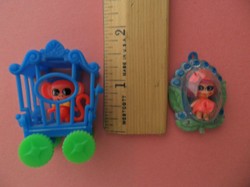 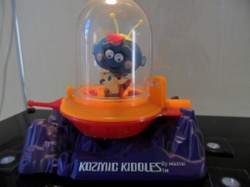 Every now and then an unusual toy surfaces that stands out from the crowd more than the others. Behold, the happy-faced intergalactic little entities known as "Kosmic Kiddles!"
100%  16   20 irenemaria
Vintage Dolls