Why this smaller travel crib makes a great bed for your newborn baby.

I bought my first Pack 'n Play when my first child was a baby.  That was 10 years ago and we bought it at a garage sale.  It was a regular size Graco Pack 'n Play that didn't come with any "whistles or bells" but it was used when we bought it and has been used with our 5 children.  That shows what great, sturdy and long lasting products Graco makes!  And now it makes very fancy pack 'n plays with all sorts of attachments and storage.

I thought that pack 'n play would be the only one we'd ever need.  Until baby number 5 came fast on the heels of baby number 4.  They were 22 months apart and we were living in a 1600 sq. ft home with only 3 bedrooms.  Our 6 person family was using up every last inch of floor space, garage floor space and backyard space that was possible!  Where was baby number 5 going to sleep?

I knew I'd want him to sleep right next to my bed in a bassinet for the first few months.  I also knew we were taking several summer trips right after he was born and both babies would need a travel bed.  Finally, I knew that we were trying to move into a bigger home and that we would be using the pack 'n plays for a lot more than just travel use.

With each baby I have had a different bassinet.  And after they grew out of their bassinet I resold it because it is impossible to store a bassinet since they don't fold down and store well unless you put them in your rented storage space, which we don't have thank goodness.

I wanted a 2-fer ("2 for one").  A bassinet that would travel well and store well.  I also wanted a bassinet that would be sturdy so that my older children could not reach up and pull the bassinet--and sleeping baby-over onto the floor.  That happened with baby number 2 unfortunately.  So ever since then it's been a really key issue for me.

2 years prior to baby number 5 I was at my cousin's house and saw her Graco small pack 'n play and I asked her about it.  That was my one and only introduction to it.  So when it came time for me to figure out sleeping arrangements for baby number 5 I called on that memory and a bright idea began to flow!

I realized the Graco small pack 'n play would fit all my needs!  It has different "stages" so it works as a bassinet and then also as a regular pack 'n play.  It is small enough to fit in the space between my wall and my bed.  And it would be small enough to eventually move into the already-full room with my daughters at the foot of their bed.

Why I love it!

It packs up and stores easily and is easy to throw in the back of the car for travel or for babysitting needs.  And it's a Graco so it's a strong, good, sturdy, meant-to-last product.  And I loved the colors it came in!  They easily fit my decor and were neutral and could go with either a boy or girl room decor.

I wish I had found this product 10 years ago!  I guess I wish they had MADE this product 10 years so that I wouldn't have had to go through 5 bassinets to find the one I love.  And now that my baby is 9 months old and has finally graduated to a bigger crib bet, we have this pack 'n play neatly stored in our garage, as small as a sleeping bag, and can still use it for baby when we travel because a baby will be able to fit in this bed for travel purposes until they are about 18 months old or 2 years old, depending on the size.

Definitely worth the price!  It's not an expensive baby product and will last forever!

This image shows the day my 22 month old climbed into the Graco Travel Lite Crib and Bassinet to be close to his new brother!  It shows how roomy the bassinet is and how the attachments that come with it allow it to rest in the top of the pack 'n play. For the picture I removed the canopy that comes with the bed.

After a few months, when you are done with the bassinet stage of your baby's life, you can remove the bassinet attachments and have a great play pen that is small, yet sturdy, to fit in any space of your house.  Our baby slept in this as his bed until he was about 8 months old.  Now he sleeps in a bigger bed but still uses this travel pack 'n play when we travel.

I love this Graco Travel Lite Crib so much that it made my Top 10 Favorite Essential Baby Products list and has received rave reviews from all it's users!  Check out the link below:

Where to buy it

You can buy regular size pack 'n plays just about anywhere.  The second hand market is full of them!  But most places don't carry the Graco Travel Lite Crib in-store.  I did see one once at a Babies R Us, but that store is not close to my house so when I needed to buy one I looked online.

They sell them at all the regular baby sites; Babies R Us, Target, Walmart.  But Amazon.com had the best selection of color and style and was the cheapest price, and they offer free shipping on Prime shipping option.  I had mine within 2 days and was totally thrilled with not having to go to a store to buy it!

I love the Graco Travel Lite Crib!  It's the best 2-fer baby product!

Make your own pack and play mattress for it!

Since my baby slept in the travel bed as his main bed for so long I wanted to make sure it was comfortable for him as he gained weight.  The "mattresses" on pack and plays are just a board covered by a thin pad.  So I went to my local fabric store and purchased a 3 inch thick foam pad and had them cut it to the size of the pack & play.  It made a soft, comfortable, cozy bed for my little guy!

They also sell sheets and pads that fit this smaller, travel size pack and play on Amazon.com:

A bassinet that folds up sounds like a great solution to problems with lack of storage space.

The older boy in the picture is 22 months old but they are in the bassinet portion which rests inside the crib. The bassinet portion is too small and not sturdy enough for a baby older than 4-5 months to sleep in. Thats why it is removeable. But if you take that part out the actual pack n play is big enough and a 24 mo old could sleep in it, although it would be a small space. But an average 24 month old could stretch out was to foot in it and still fit.

I know this was posted a while ago but do you remember how big your older son was in the picture? I'm trying to figure out what would be the max size a baby to sleep in this comfortably... Thanks!
Great post btw!

There are plenty of cheap baby cribs on the market that don’t sacrifice quali...

All moms like to travel lite when it comes to their children, and that's why ... 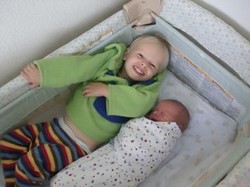 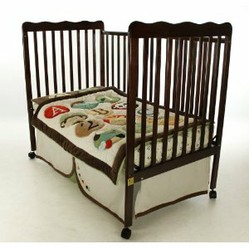 There are plenty of cheap baby cribs on the market that don’t sacrifice quality in relation to possessing a discount price tag.
7%  0   1 Tested_to_Destruction
Cribs and Bassinets 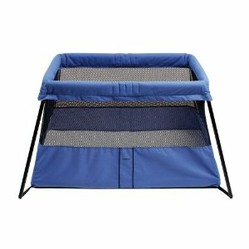 All moms like to travel lite when it comes to their children, and that's why the Travel Crib Lite, by BABYBJÖRN, is a great investment.
Loading ...
Error!