A landscape may seem to be pretty in pink with the pink and white flowers of crown vetch. Behind the prettiness nevertheless is a troublesome non-native invasive plant.

An Old World native plant, crown vetch was introduced in the 1950s into the United States and Canada as ground cover to control erosion.

The nightmare of crown vetch is its ability as a non-native invasive species to dominate its environment to the detriment of native plants.

A synonym for Securigera varia is Coronilla varia. The synonym’s genus name, a diminutive form of the Latin word corona (“crown”), recognizes the annular (“ringlike”) arrangement of the flowers on their stalk. The common name links crown, for the coronal floral arrangement, with vetch, a corruption of the Latin word vicia (“bean plants”), recognizing that Securigera varia is in the legume family, Fabaceae.

Native to northern Africa, southwest Asia, and Mediterranean Europe, Securigera varia was introduced into the United States and Canada in the 1950s as ground cover in erosion control.

Growing from a taproot, crown vetch puts forth branching stems which rise vertically and also trail horizontally. As it vines along the ground, it creates a canopy of dark green esthetically interspersed with its pastel flowers. Crown vetch generally stands upright at heights of one to two feet (0.3 to 0.6 metres), although stems reaching six feet (1.8 meters) in length also occur. Underground, its rhizomes, which sprout roots and shoots, may attain lengths of 10 feet (3.04 meters).

Because they are in the legume family, they produce seeds in pods, which are one to two inches (2.5 to 5 centimeters) in length. Seed pods, which are segmented, are borne as crown-like clusters. Seeds, which are numerous, have a cylindrical shape with a brownish color.

Crown vetch leaflets are lanceolate, meaning that, having the shape of a lance, their length exceeds their width. Their coloring is dark green.

Leaflets alternate and are odd-pinnate (imparipinnate), i.e., two rows of leaflets with a terminal leaflet. Leaflets may total anywhere from fifteen to twenty-five on a stem.

Crown vetch produces small half-inch (1.27 centimeters) flowers, colored pink and white or lavender-purple and white. Clustered on a stalk at the tips, flowers bloom from early in the spring to late in the autumn.

a sea of crown vetch

Whereas the Rhizoctonia leguminicola fungus, an extrinsic plant pathogen, is the culprit in equine slobberings after grazing on clover, nitroglycosides that are intrinsic to Securigera varia may:

Coronarian inhibits succinate dehydrogenase, an enzyme that is critical for equine energy metabolism. Fatal toxicity occurs with the development of methemoglobinemia, wherein the horse’s blood is unable to carry oxygen to its tissues, producing abnormal levels of methemoglobin (oxygen-carrying protein hemoglobin with its iron in the ferric state) in the blood and tissue hypoxia (oxygen deprivation).

Because of its rapid growth and spread, by both rhizomes and seeds, crown vetch effectively counters soil erosion in damaged soils. Crown vetch is not disturbed by eroded soil. As a member of the legume family Fabaceae, crown vetch establishes a symbiotic (Greek: sýn "with" and bíōsis “living”) relationship with rhizobia as its host plant. Rhizobia are soil bacteria that are classed as diazotrophs because they effectuate the essential process of nitrogen fixation. The process entails converting nitrogen gas, which they have extracted from the air, into a form of nitrogen that the host plant is able to use. As a result of this symbiotic relationship, crown vetch rehabilitates the soil content to acceptable levels for its survival.

The negative extreme of its easy proliferation is that Securigera varia quickly establishes control of areas, thereby banishing other desirable species. Its planting for purposes of erosion control along roadsides and rights-of-way and in open fields has provided crown vetch with a strong base of operations from which to spread. The hardy plant flourishes in poor soil, where there is little competition, and keeps extending its territory. Its seeds retain their viability in soil for several years, which increases not only their timeline for propagation but also their opportunities.

Soon Securigera varia borders and then tackles gardens and lawns, weakening and oftentimes eliminating cultivated plants. As such, crown vetch is now considered to be an invasive species: their domination of their environment disrupts the habitat balance by adversely affecting the floral profile.

With this impairment in biodiversity, the ecosystem suffers imbalances and even abandonment. So a new kind of erosion -- the erosion from the plethora of polyculture to the paucity of monoculture  -- is established.

Distribution in Canada and the United States

Crown vetch, which is not native to the United States of Canada, has become naturalized extensively throughout these two North American countries.

In Canada, Securigera varia is found in all of the provinces. Although crown vetch has been reported on Newfoundland, it is not yet documented in Labrador. Crown vetch is not found in any of the three territories, so far.

In the United States, crown vetch has been documented in all states except Alaska and North Dakota. Securigera varia has been sighted in the nation’s capital, Washington, D.C. but it has not been reported in Puerto Rico nor has it been recorded in the U.S. Virgin Islands.

How to control Securigera varia

Spring’s Securigera varia in my lawn

Purple crown vetch has made an impromptu appearance along the entire south side of my house. Specimens have also clustered around the west side of my house, to the south of the back stoop.

Moreover, purple crown vetch now arcs around the southwest curve of the ornamental rocks that bolster my house number at the opening into the eastern expanse of my yard. Situated a few feet from the road and from the entrance to my driveway, Securigera varia is readily visible to all passersby.

That welcome glimpse previously was proferred by chickory (Cichorium intybus), for which we fondly named my house Chickory Cottage. Chickory’s peaceful blue flowers blazed from a diminished number of plants last summer. Apparently crown vetch was already casting covetous rhizomes and seeds in the direction of the gentle chickories, which have beneficial uses, in addition to their loveliness, that have been enjoyed in the United States since their naturalization here in the 1700s.

The nightmare invasion by Securigera varia has been progressing with great determination, unbeknownst to me.

But now I know, and there is no way that my house is being renamed Vetch Cottage.

Mira, The problem is that, as an invasive species, crown vetch takes over pastures; as they forage, horses are consuming them because the crown vetch slips in amidst pasture grasses.
Chicory root as a substitute for coffee was popular in America from colonial times all the way through the 20th century's Great Depression, after which it was replaced by coffee. I also like the flavor of chicory substitutes. It would make sense to me that chicory drinkers are able to work long hours: it's invigorating without the jittery effects sometimes associated with caffeine.
Chicory used to be well known in America as an edible, healthy plant. Now it seems that its culinary appeal is mainly appreciated in Europe. For instance, Belgian endive is in the chicory family.

They look beautiful, but it's amazing how harmful they can be. I'm particularly saddened to learn they are toxic to horses. Do horses know to stay away from them?
I love chickory. I recognize the flower but I wonder how come (I don't recall where I must have seen and learned about it.). I love instant chicory. Many people drank such beverages here under Communism. I don't know what they did for them caffeine-wise. On the other hand, maybe with the health benefits chicory has, they didn't need much coffee. Times were different, too. Not a whole lot of stress at work, even though (most) people did work, and some worked long hours.

VioletteRose, Me, too, I agree that the color combination of the petals is beautiful. And they look pretty in my yard, but they also scare away Chickory, so I weed them back so that, instead of the entire yard, they have a specific area.
Unfortunately non-native plants often become invasive as a survival mechanism as they adjust to unfamiliar environments.

Beautiful combination of white and pink petals, I haven't seen these flowers anywhere. They are so pretty, it is unfortunate that their presence is a threat to other plants.

Brown marmorated stink bugs (Halyomorpha halys), as they shrug off their wint...

Sea Walnut Comb Jelly: A New World Native That Has the Old Wor...

The accidental odyssey of the sea walnut comb jelly from the New World eastwa... 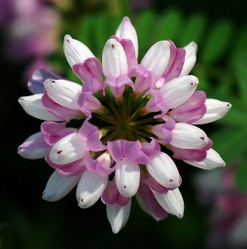 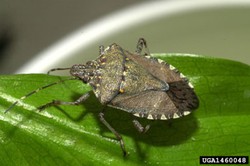 Brown marmorated stink bugs (Halyomorpha halys), as they shrug off their wintry hibernation, announce the arrival of spring.
39%  0   3 DerdriuMarriner
Biodiversity

Sea Walnut Comb Jelly: A New World Native That Has the Old World by Its Tentacles

The accidental odyssey of the sea walnut comb jelly from the New World eastward to the Old World is presented.
Loading ...
Error!