The diamond or lozenge mark on British products was introduced in 1842. From 1883 it was replaced by numbers. Here's how to decode the marks and determine the registration date.

During the Georgian Period (1714-1837) the Industrial Revolution had seen the capability for copying items increase exponentially. At the beginning of Queen Victoria's reign (1827-1901) the UK Government decided that the buying public needed to be reassured that products made in Britain could be categorically identified as British.

Goldsmiths and silversmiths had Assay Marks to determine the quality and origin of their products so the public could be guaranteed of the origin of those wares. British ceramics manufacturers had stamped, painted or impressed company back-stamps before that date, introduced by Wedgwood. But the public needed to know that the product was British, both nationally and internationally. Other products, however, had been slow to incorporate anti-copying mechanisms to protect their investment in designs.

So, the Ornamental Design Act of 1839 saw the birth of the notion of copyright.

Each of these built on the protections introduced with the first Act in 1839.

The Acts enabled products to be registered so that they could be associated with particular British designers or manufacturers .From 1842 until 1883 extract information from the registration process was recorded on products (not all products) using a Diamond (or Lozenge) Mark.

Designs for various products were recorded at the Patent Office. But in order for the assurance of British manufacture to be seen by the public, Registration Diamonds were introduced after the Act of 1842.

The first diamond mark lasted until 1867. It was then replaced, in 1868, by the second diamond mark, which lasted until 1883. There is no difference in the shape of the mark but the positioning of the pertinent information did change.

On both, the following information was recorded:

Each of these will be explained below.

From the 1842 Acts, product Class classifications were introduced. These were recorded on products in the Registration Diamond. For the whole period between 1842 to 1883 it was recorded as a Roman numeral in the top half-circle at the apex of the diamond. Individual classes of material had a different Class number, the most relevant for the Antique collector being, as follows:

Class V and Classes VII to XIII were for paper and fabrics of various type.

Numbers and Letters in the Registration Diamond

The Registration Diamond has 4 arcs in the corners of the diamond. This is where the information is recorded for the Year, Day, Month and Bundle.

The Day and Bundle are recorded as numbers.

The Year and Month are recorded as Letters.

The positioning of these numbers and letters changed from the 1842-1867 period to the 1868-1883 period. It is possible to determine which period the Registration Diamond falls within by the position of the numbers.

Using the Numbers to Determine the Registration Period

But why did they change?

Well the reason relates to the fact that the Year was represented by a letter. And if you do the Maths then you will calculate that there are 26 letters required to allocate a letter to each year between 1842 and 1867. So by 1868 all letters had been allocated.

What to do now?

If there is a number located at the right or bottom of the diamond then the registration diamond period is 1842-1867.

If a number occurs at the left or top then the registration diamond period is 1868-1883.

Numbers relate to the Day and the Bundle. The Day should be self-explanatory. The Bundle is just a grouping of registrations into which a number of registrations were entered. This is sometimes called a Package.

If the archives are looked at to determine all the information about a particular object then the Bundle number would give the general location that the information is recorded. It is similar to a ledger, where many individual details are recorded line by line. This is all that I will say on the subject of Day and Bundle

Month Letters for both Periods

This information is of no great interest to the antique collector unless they wish to access the Archives.

As outlined above, the 26 years between 1842 and 1867 were allocated a letter each. This way of indicating the year was in order to limit the number of characters recorded to one (1). They did not, however, make it easy to remember the letters associated with each Year. There is no logical correspondence between the letter and the year. I do not have an explanation for this. What I do have is a list of the year associated with each letter, as below:

Once all the letters of the alphabet had been used up for the period 1842-1867 something needed to be done. As noted above the decision was to change the position of the Year letter from the top arc to the right-hand arc. Letters were then allocated randomly for each following year for the period 1868-1883. The letters allocated are as follows:

W was used incorrectly at the beginning of March 1878 because they mistook the Month Letter (March = W) for the Year letter. Although not all letters were utilised in the period 1868-1883 a new system of showing the Registration was adopted in 1883.

The Ornamental Design Acts BT50 & BT51 of 1883 created a regime for change to the Diamond Mark that had been used since 1842. From 1884 the Registration Diamond was replaced by a single number prefixed by "Regn No", "Rd", "Rd No" or some combination of these. "Rd" had been incorporated in the centre of the Registration Diamond previously and stood for "Registered Design" and showed that it was a Patent Office mark.

This continued with the new method of indicating the registered design number. Finally, a logical sequence was adopted and the numbering started with 1 and increased in increments of 1 until the last number was allocated in 1965 at over 900,000.

The list of numbers below shows the first number allocated for the first year of the decade.

From this list a rough estimation of the year of registration (not necessarily the year of manufacture, as the item could be in production for a considerable time, and the start of production may also have been delayed) can be determined.

The UK Patent Office has all of the details for all of the objects recorded using the registration mark or number. From the records held it is possible to view the designer and/or the manufacturer of the design, and in some instances for whom it was designed.

This can be invaluable for the antique hunter, as attribution to a particular designer can mean the difference between a low value and a high value for the object. But beyond this it is a source of information for those that wish to know more about their object than is available just by looking at it.. 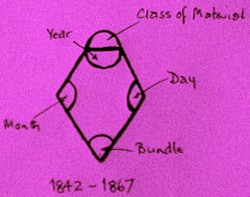