By Mira at Wizzley. Notes on the Delta Machine Tour concert Depeche Mode gave in Bucharest, Romania on May 15, 2013. Includes setlist and photos.

Twenty years ago, when I was a teenager, I had a notebook with lyrics to Depeche Mode songs. I loved them, as song lyrics went. I still do. I loved it at 15 when they sang “A Question of Time,” from their 1986 album Black Celebration. They sang it last night. “Black Celebration” as well!

A guy behind me screamed the lyrics to every song. I was worried I might hear his voice over Dave Gahan’s when I replayed the short video clips at home. Unfortunately I got such a buzzing noise over the beautiful, creamy, dark, shadowy baritone voice that Dave Gahan has that I can’t bear to replay the clips. And I so wanted to relive last night’s experience a bit more!! Gotta love Dave Gahan’s timbre. And his showmanship, with his twirling and shimmying.

They performed many songs from their Delta Machine album, as expected. They sounded really, really good in concert! Go see Depeche Mode!! Here's the setlist they did in Bucharest, Romania, on May 15, 2013, along with more of my observations on their concert. Photos included.

Here are the songs Depeche Mode performed in Romania last night, in order:

“Welcome to My World”

“Walking in My Shoes”

“Barrel of a Gun”

“When the Body Speaks” (sung by Martin)

“A Question of Time”

“Secret to the End”

For the encore, they sang

“Never Let Me Down Again”

Some Photos from the Depeche Mode Concert in Bucharest

I had a standing ticket on the pitch, close to the stage. Well, it was for “Gazon A,” the first of the two sections set up on the National Arena’s playing field, and I was the one who made sure I was close to the stage, because “Gazon A” was a pretty big area. I got to the stadium at 5pm, when they started to let people in, managed to find a good spot, and stayed put some 9 people away from the stage. I didn’t go for a soft drink or a hot dog or popcorn, because I just couldn’t believe my luck. Did I tell you I managed to get this ticket for “Gazon A” – a special pass / an invitation -- at the last minute, on the day of the concert?

More Photos from the DM Concert

My own ticket – the one I had bought -- was way far up on a seat in “Tribuna II” (in the uppermost section of the bleachers opposite the stage). I got a cheaper ticket because I wasn’t sure I was going to make it to the show. That’s also the reason why I didn’t get a ticket on the pitch in the first place. I was trying to decide whether I should risk the money. In the end, of course, I realized that the old adage is so true: having regrets for what you didn’t do is much worse than having regrets for what you did.

To this day I don’t know what I was thinking when I didn’t get a ticket to see the (Rolling) Stones in 2007. All I can say in my defense was that I was going through a time in my life when I was too unhappy with how many things were going to feel like doing many things fun. I know I’ll try my best to never fall into that trap again. So, anyway, this time I went ahead and risked the money: I bought a ticket. Making up, in part, for what I missed in 2006, when Depeche Mode performed in Bucharest, Romania for the first time.

It took me a while to find the entry for “Gazon A,” but the guards were helpful. Other than that, the whole event was well-organized, and the crowd was great. People went to get food and beer (the company behind the beer brand Ursus sponsored the event, as did the telecom operator Cosmote and the bank Volksbank), and came back to their spot. No one pretended they had had a spot up front when they didn't, and no one tried to move further ahead.

Well, at least one person around me did, but that’s because I heard her comment, in a frustrated but nice way, that she couldn’t believe she had the luck to have a spot right behind me. I happily let her move up in front of me. I was really surprised how kindly she manifested her irritation. A less gentle person would have made a nasty comment and moved in front of me straightaway. Nota bene: I was dutifully recording bits and pieces of the opening show by the band F.O.X., partly as a way to reappraise them after the concert, and partly to test my new camera, a Canon S110. You know part of the verdict: the mike of this Canon cannot handle neither close-by loudspeakers, nor crowd cheers and whistles. As for the band F.O.X., I thought their songs were not bad, but a little flat and rather too similar to one another. But I hear they’re a new band (formed this year?), so maybe they’ll get to develop their sound in a more successful way. Of their songs, I liked best “London Town.”

F.O.X. finished at about 8:15, and Martin Gore, Andy Fletcher, and Dave Gahan came onstage around 8:50, 8:55. Either then or later two other musicians joined them, Peter Gordeno and Christian Eigner. Depeche Mode started with a song from this year’s Delta Machine album, “Welcome to My World.” The guy behind me started singing right away, word for word. Eventually, somehow, in the latter part of the show, I stopped hearing him. Either more people started singing, or the music was louder, or I had gotten lost in the excitement of the moment.

The show lasted some 2:20 hours, from about 8:50 to 11:07. When Dave took a break after "Barrel of a Gun," Martin stepped center stage to sing first "Higher Love" and then "When the Body Speaks." The public loved it!! In fact, when Martin had finished singing "Home" a little bit later and relayed the microphone to Dave, the audience continued to sing the melody bars from the ending to Home for quite a while, and Dave ended up conducting the fans, to everyone's delight.

I looked at videos taken from up high in the bleachers and the crowd was huge. Down on the pitch there was “a sea of people,” as we say in Romanian (as well). A pretty animated crowd, too. I’m reading that after “Just Can’t Get Enough” Dave said “Oh, baby! Thank you!” – which made me smile. I have also seen Dave smile many times on stage! It’s so wonderful to notice a singer’s involuntary smile when you’re in the audience!

The visuals -- some, all? -- are the work of Anton Corbijn. Some were pretty colorful and seemingly inspired from the film Tree of Life. Didn’t look like his style. Anyway, I loved the doggies, and the montages with the DM members and the delta symbol of their Delta Machine Tour.

I hope you get to see Depeche Mode in concert!!

I will be listening to Delta Machine for a while. (And I want the best sound I can get!) I only quickly listened to some of the songs in the days leading up to the concert. Now I’m hooked. (That’s the beauty of concerts promoting an album.) I was happy they played as many new songs as they did. They’re beautiful and haunting, as always!

I’m always amazed at how versatile this band has been and continues to be, and how amazing all their songs are!!

THANK YOU, Depeche Mode! Looking forward to seeing you next time!

More Photos from the Concert. Enjoy!

Mira, Depeche Mode has fans everywhere. Their creativity has long been appreciated, and they've garnered respect in countries with distinctive musical traditions such as Brazil, Portugal, and Spain. It's good that the devotee of singing lyrics faded from your consciousness because that can be quite annoying: no way that someone in the crowd is going to sing as well as -- or better than -- those artists on the stage.

One of the best!

Awesome indeed, love how they incorporate such impactful visual imagery, takes me back to the original MTV years when imagery and the story spelled out in movie form was a big part of the music. Great Band!

Thank you for stopping by, Tolovaj! Ever since the concert, I keep singing DM songs all day long, thinking how awesome they all are :D:D

I see you had great time in concert. It's good to see Depache Mode is still alive and kickin'... Thanks for bringing some of the highlights here!

Thank you, Robin! They're truly wonderful! :)

Mira...thanks for this article!
I was a Depeche Mode fan in my younger years, too! Listened to them in college in the late 80s...great walk down memory lane! 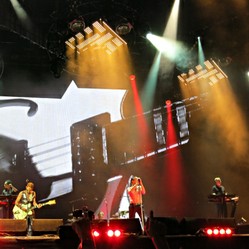 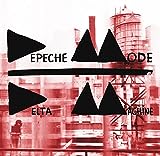