Having a dog is an excellent excuse when it comes to exploring - after all, you have to walk them, and what better reason to go looking for new trails.

Quite a few dog owners enjoy taking their four-legged friends to dog parks. We, however, prefer to find out-of-the-way places where we can enjoy the scenery and quiet beauty that surrounds us.

One such find happened after a trip to Coquitlam. We had finished our business and had to let our very patient dog stretch her legs before the return ride home.

After a quick detour through the city, (something that can't be avoided as there is more city than parkland), we opted to follow a road leading 'up'. I know that sounds vague, but that is exactly what we did.

(It wasn't until the journey was at an end and we were returning home that I noticed the name of the road! I was more interested in the scenery than where we were...)

The road we followed led through an enormous rock quarry that was populated with commercial structures, heavy machinery and a seemingly endless convoy of dump trucks. It was an interesting journey as neither of us had ever been in this neck of the woods before, and we were curious to see where the road would take us.

We spotted what looked like a dog park along way, but decided to keep driving just to satisfy our curiosity. After several twists and turns, we discovered that the road was blocked by a gated enclosure, that was manned by security guards. Realizing that our tour had ended, we dutifully turned around and headed back the way we had come.

As there didn't seem to be any trails along the route, we opted to stop at the park we had seen on the way by. When we got there, we discovered, to our surprise, that it wasn't a dog park after all, but was a small air strip for model planes! A few people were gathered around a bonfire and a couple of them were putting their planes through their paces.

Not wanting to disturb the remote control pilots, we skirted the field and wandered towards the trees along the edge of the runway. Imagine our surprise when we discovered the trail we were following widened into a lush river walkway.

Obviously, this area was known to the 'pilots' who came to practice at the field, and we also found signs stating the river was part of a salmon hatchery.

We didn't stay long, as we also saw signs declaring "Bear in Area" - a no-brainer seeing as we were on the edges of a salmon hatchery!

We couldn't resist snapping a few photos along the way. It was just so peaceful and the scenery was captivating. There is just something about moss covered rocks, swirling eddies, shallow pools and rushing rapids.

The urge to capture a moment in time was too strong to ignore. I knew I should have brought my camera!

It just goes to show that even when your outing is a simple appointment in the city, you never know when a photo opportunity will pop up. Next time, I will listen to that small, inner voice saying "Bring the camera!"

Thank goodness I had my cell phone with me! I wasn't sure how the pictures would turn out, but even if they would only be good enough for me to remember the day, I would be happy with that.

We are fortunate to have so many little trails and untouched pockets of forest within a half hour's drive in any direction.

I never get tired of walking in the rain forest and seeing the immense trees with their coats of Spanish moss, or the huge ferns that flourish among the giants. The fern in the picture above was the largest I have seen, standing in at least five feet tall.

The colors of the water and the wild beauty of the forest, even on an overcast day in the heart of winter, can rival any vacation destination.

There is a quality of beauty and sense of serenity that can be felt when you walk among these sleeping giants. You feel at peace with the world, your cares and woes forgotten as if washed clean by an invisible presence.

All too soon, it's time to leave - but maybe, through the lens of a camera, you can take a small piece of paradise home with you.

Thanks redelf, I love it here and I never get tired of the scenery. (When my cell phone contract comes up, I'm making sure to get a phone with a really good camera!)

You really do live in 'God's country' you lucky woman... and your cell phone does take great pictures!

weekend backyard vacations, mini stay at home vacations, exploring your own b... 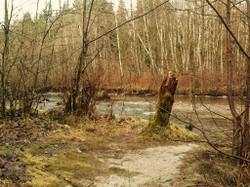 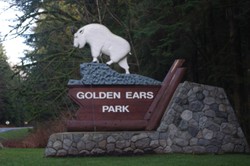 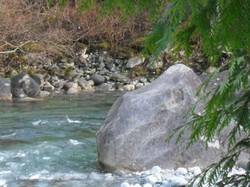