Doctor Who 2015 Christmas Special: The Husbands of River Song

One of the highlights of Christmas is the Doctor Who Christmas Special, and this year promises to be no different with the return of Alex Kingston as River Song.

For the first time Peter Capaldi's version of the Doctor comes face to face with his wife River Song, but will River realise who he is with his new body and face? That question will be answered in the 2015 Doctor Who Christmas Special, though the reunion is a little complicated by a rather nasty cyborg.

A robot bodyguard is not the image normally associated with Christmas, but this is Doctor Who and this year’s Christmas special, due to air on BBC One at 5.15pm on 25 December 2015. The robot is guarding King Hydroflax, a cyborg himself, played by Greg Davies, but the real fan interest is in the news that the hour-long episode will see the return of River Song, played by Alex Kingston.

The episode, written by Steve Moffat, is set on Christmas Day on a remote human colony and the Doctor is hiding from Christmas carols and comedy antlers, that is until a crashed spaceship calls upon the Doctor for help, and he finds himself recruited into River Song’s squad and hurled into a fast and frantic chase across the galaxy.

“To be honest, I did not know whether River would ever return to the show, but here she is, back with the Doctor for the Christmas special,” said Kingston. “Steven Moffat is on glittering form, giving us an episode filled with humour and surprise guest castings.”

The Husbands of River Song

The episode is called “The Husbands of River Song” and in it King Hydroflax is furious, his robot bodyguard is out of control and coming for them all. Will Nardole survive? And will River Song work out who the Doctor is? This is set on a starliner full of galactic super-villains with a destination the Doctor has been avoiding for a very long time.

“Another Christmas, another special for Doctor Who,” said Moffat, “and what could be more special than the return of Alex Kingston as Professor River Song? The last time the Doctor saw her, she was a ghost. The first time he met her, she died. So how can he be seeing her again? As ever, with the most complicated relationship in the universe, it’s a matter of time.”

This will be the first time River Song has seen the Doctor since he regenerated into the version played by Peter Capaldi, and Moffat admits that was a driver for the episode.

“The Doctor is an all new man and has been for a while,” said Moffat. “It may have slipped his mind that out there, in a very tangled and complicated way, is his wife that has never seen this face before and doesn’t even know about this incarnation. We’re about to stand with the Doctor and see what River is like when she doesn’t know he’s looking. We’re about to see what River thinks of Matt Smith turning into Peter Capaldi. River Song meets the Capaldi Doctor, that’s got to be fun – I’d like to write that. That’s what made me want to write. I knew it had to be a big romp for Christmas day and there’s nothing like River Song to make that evident – River brings a whole storm of camp glamour to it.”

Surrey-born Alex Kingston was nominated for a best actress Bafta for her role as Moll Flanders in the 1996 TV movie The Fortunes and Misfortunes of Moll Flanders. She first appeared on TV screens though back in 1980 as Jill Harcourt in Grange Hill, and in the same year she was a schoolgirl in The Wildcats of St Trinians.

She made her first Doctor Who appearance in 2008 in “Silence in the Library” and “Forest of the Dead” and this will be her 17th appearance.

About the 2015 Christmas special

A BBC Cymru production, the episode was written by Steven Moffat, directed by Douglas Mackinnon, executive produced by Brian Minchin and produced by Nikki Wilson. As well as Peter Capaldi as the Doctor and Alex Kingston as River Song, it stars Greg Davies as King Hydroflax, Matt Lucas as Nardole, Rowan Polonski as Flemming, Nonso Anozie as Tharg, Tom Chadbon as Lord Chamberlain, Aidan Cook as the robot and Phillip Rhys as Ramone. It also features Robert Curtis and Chris Lew Kim Hoi.

And it was meeting Matt Lucas’ character that was Capaldi’s favourite moment.

“I have lots of favourite scenes from the Christmas episode, but I think being met by Matt Lucas on a wonderful wintery Dickensian street with the Tardis covered in snow was delightful, because it was like a Doctor Who Christmas card,” he said. “Matt is such a fabulously funny person to have around, so I loved that.”

SteveRogerson, Thank you for product lines, pretty pictures and practical information.
The library system here has the Doctor Who episodes. It looks like it may be all of them, I may have gone through about one-fourth of them already. It will be fun to go back to catching up, since the ones that I know best are Tom Baker and Peter Davison.

Which Doctor would have been in the series when River Song first appeared? 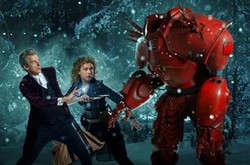 A look back at the career of Peter Capaldi, named as the twelfth of the main actors to play the lead role in Doctor Who.
24%  1   3 SteveRogerson
Science Fiction