Doctor Who Editions of Popular Games

If you are a Doctor Who fan you will be interested in the special edition games that showcase Doctor Who. In fact, the forst eleven Doctor Who characters are all well represented,

Doctor Who, the immensely popular science fiction series from Britten, has now passed fifty years since its inception. Many board games now have Doctor Who editions, some in response to the fiftieth anniversary of Doctor Who. And these editions are especially designed for the great number of Doctor Who fans.

These board games can be the focal point of a game night, whether it is with family or friends. Or, when guests stay overnight as often happens for many people during the holidays, board games can help entertain them on at least one of those nights.

Since many of the games were released for the fiftieth anniversary, the twelfth Doctor Who is not always included.

Assume the Persona of Your Favorite Doctor

There are at this time eleven Doctor Who characters, each distinct, in the packs being sold.  Unlike most television series that replace an actor or actress when one leaves, Doctor Who comes up with a distinct character and keeps going.  So, there are eleven doctors from which to choose.  If you act as one of the eleven doctors, and play the game while in character, the experience can be even more enjoyable.  One way of announcing which person is emulating which doctor is to place the doctor as depicted in the action figure set shown below in front of the corresponding player.

Trivial Pursuit can be great fun, and a special edition like the Doctor Who edition provides a way for fans to show how much they know about the series.  This edition of the popular board game provides a refreshing relief from using the same questions over and over.  But, it requires knowledge of the first eleven doctors.  This allows people to demonstrate how much they know about the series as a whole, and even gives insights into the series that might have been missed when the series was viewed.  This is highly recommended for the true Doctor Who fans.

Players use symbols known to Doctor Who fans as playing pieces instead of things like the dog.  Instead of buying, selling, and trading property, players buy, sell, and trade iconic episodes of the popular television series.  This makes the game a true Doctor Who edition.

Play the popular game of Clue with a Doctor Who settings and characters.  The places are planets visited in the series by Doctor Who.  The suspects are Amy and Rory Pond, Strax, Clara, Jenny, River Song, and Madame Vastra.  Play Clue as a true Doctor Who fan.

Doctor Who Yahtzee is Yahtze with the five dice depicting foes that Doctor Who has had to deal with.  The cup used to toss the dice is a Tardis, of course.  These must be a Tardis.

The Dalek invasion of Earth is the basis of the Doctor Who Risk game.  The eleven doctors are all part of the game.

This is a special card game for Doctor Who fans.  The second edition shown here has cards even for the twelfth Doctor Who.

If you have ever played Jenga and enjoyed the experience you will want the Tumbling Tardis Tower.  Imagine the fun of Jenga with a Tardis as the tower.

Make It a Party

Decorate and serve refreshments using the Doctor Who theme, and your board games can make you a real special host or hostess among your friends.  Other Doctor Who fans will be happy to visit.

The party pack shown below contains one table cover, eight cups, eight party plates, and sixteen napkins.  In addition you get ten balloons and a banner.  The light string of Tardis lights completes the statement that you are a true fan of the good doctor.

It exceeds fifty years and has had different Doctor Who characters.

I am slow in catching on to how popular Dr. Who is, but I am hearing the show mentioned more and more. We have hundreds (I think) of episodes on Netflix if I ever wanted to dive in and give the series a try. I love shows produced in Britain. 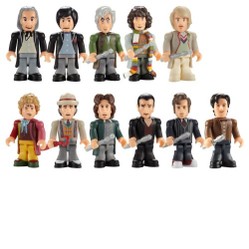