A review of the Christmas special that first aired on December 25, 2014.

Synopsis: The Doctor (Peter Capaldi) reunites with Clara (Jenna Coleman) and travels to the North Pole. There, they encounter a group of scientists that are facing Dream Crabs and, when a still-grieving Clara is attacked by one, it is up to the Doctor to enter her dream and get her to wake up. Only, things aren't what they seem and, ultimately, the Doctor and the rest of the people with him have to rely on an unusual source of help, Santa Claus.

A Unique and Enjoyable Christmas Special

My wife, daughter and I wanted to watch this episode when it first aired on Christmas Day. But, by the time it came on, we were all too worn out to sit down to watch it and, as a result, didn't see it until yesterday afternoon instead. As it turns out, it wasn't what we were expecting it to be. However, we still enjoyed it.

Those Dream Crab creatures were some of the creepiest Doctor Who monsters we've seen and, because of them, I was a little concerned my daughter would end up having them in her dreams. What I wasn't expecting was the great deal of confusion those monsters would end up causing in the episode as layer-by-layer, the Doctor kept revealing everything they thought they knew wasn't real.

One thing I liked about this particular episode had to be the focus on the Doctor and Clara's relationship following the demise of Danny Pink (Samuel Anderson) in the season finale a few weeks ago. The Doctor learned he was dead. Clara learned the Doctor liked to her about finding Gallifrey and, slowly at least, their relationship seemed to heal.

That twist, however, involving the Doctor talking to a very elderly Clara near the end was something that was unexpected and even a bit shocking. It was something that was very sad and I thought, for certain, it meant Coleman was leaving the series. So, when the episode threw in the one final twist following that, I have to say I was very impressed and found I was actually glad she remained his companion.

Frost's version of Santa was also somewhat intriguing. I loved how the writers decided to keep him somewhat jolly but, at the same time, turned him into a bit of a warrior. The way the episode used him was pleasantly unique and, ultimately, did leave the subject of whether or not he was real up for debate. It was one of many things that made this episode very memorable.

My family and I always look forward to the Christmas specials from this series and this particular one did not disappoint. It was a great way to end the year and has us waiting impatiently for the new season to start next year.

A review of the season 8 episode that first aired October 4, 2014 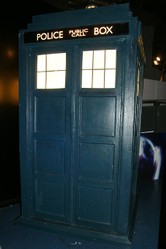 A review of the Doctor Who episode that first aired on October 18, 2014
Loading ...
Error!