Doctor Who Episode Review: The Return of Doctor Mysterio (2016)

A review of the Doctor Who Christmas special that first aired December 25, 2016.

Synopsis: The Doctor (Peter Capaldi), still mourning the death of River Song (Alex Kingston), returns to Earth just in time to fight off an invasion of brain-like aliens looking to replace the planet's human population. He receives some unexpected help from The Ghost (Justin Chatwin), a superhero he accidentally helped create years earlier.

After wait a year for Doctor Who to return to television, I (as well as my wife and oldest daughter) was very excited about the annual Christmas episode this past Sunday. And, we made sure to be done with our other Christmas activities well in advance of it airing. Unfortunately, after watching the episode, I honestly feel less than impressed with it.

I'll start out by saying I thought this was an OK episode. In fact, I actually did kind of like the whole accidental superhero story, especially the way the writers made sure to give him a potential love interest (Charity Wakefield) who has no idea the man she has hired as her nanny has a secret identity. That part was actually kind of funny, especially when he tries to reveal his secret to her only to be thwarted numerous times.

I think my biggest complaint about this episode is there really isn't anything about it that screams "Christmas special." Yes, he first meets Grant Gordon/The Ghost on Christmas Eve and is mistaken for Santa Claus as a result. But, that was only the first few minutes of the episode and was a far cry from previous Christmas specials that either took place on Christmas or have a similar theme.

In fact, while I did like the episode, I also didn't think there was anything memorable about it, at least not to the point it should have been aired as a special. At most, it was similar to what I would expect to see mid-season, when the writers are trying to keep viewers interested but are also trying to put the best stuff aside for later, when they are building up to the season finale. It honestly was almost as though they happened to have this spare episode laying around and decided to put a Christmas tree in it so they could use it at Christmas.

This still remains one of my favorite television shows. But, to tell you the truth, I have been starting to lose interest ever since Capaldi took over the lead role and, unfortunately, this "Christmas" episode didn't help that. I can only hope the new season, when it starts this spring, will change my mind. 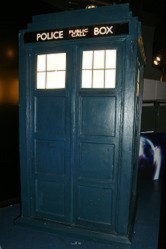