Many Americans who have had minor brushes with the law have had trouble getting into Canada for vacations but new laws have made it simpler.

Are you an American that has decided to stay out of Canada because you’ve had trouble trying to cross the border in the past? You might like to know that the Canadian government has made some changes to entice more Americans to vacation in this country. There have been two small changes that were made in the hopes of growing tourist revenue, both of which are more like exemptions than actual changes in the law books.

The first change is minor one. The $200 fee for obtaining a Temporary Resident Permit is now being waived indefinitely. But this permit was created as an emergence situation and can only be used once. Most Canadian’s don’t think this change will result in anything substantial. This change went into effect as of March 1, 2012. It is great news for people that wanted to obtain a Temporary Resident Permit, but don’t want to pay the high cost of the permit.

The next change is a little more impactful. Prior to 2012, people who had prior convictions were automatically refused entry into Canada, without thought as to what the crime was. This means people that were involved in the smallest of crimes and who posed no danger whatsoever couldn’t travel to Canada. Now, immigration officers are allowed to let people with prior altercations with the law into the country, if the conviction was a small matter and they posed no risk to others. This new lax in the border regulations between Canada and the United States will not only allow people to come into the country and have fun, but it is expected that this move will result in millions of dollars in tourist revenue for both local businesses and  the government.

With these changes, the Canadian government hopes for an influx the number of Americans that are expected to come to Canada to vacation, hunt, fish, hike or any other outdoor adventurous activity. The best place to stay if you want to take part in these types of outdoor adventures would be the Pine Sunset Lodge. There are cabins set up for hunters or nature lovers, with one style being large enough for a group of 6 people and the other one can hold as much as 14 people. Experts agree that it is too early to tell if these changes will be successful, but it does sound good enough to learn more about. 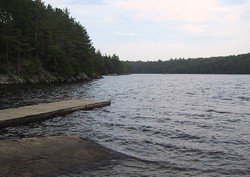