They may seem to have it all together but underneath the fancy title they're just as odd as the rest of us!

We like to think of our presidents as being perfectly normal human beings who are simply capable of great things. They are normal human beings but with a few unique quirks added to the mix. Instead of the usual history lesson of their well-known accomplishments this is about the oddities you do not find in the political archives. Some of their antics are funny, others are shady, and some are just plain odd. Still, it never hurts to learn about just how human they truly are.

John Adams liked to start his day in a unique way. At 5 am. each morning he would swim completely naked in the Potomac River. Supposedly his nude bathing helped him deal with the stress he faced as our nation's president. Anne Royall was the first female journalist (congrats on a job well done!) who was ever able to get an interview with a president. She found him swimming naked in the Potomac River and in a true moment of brilliance swiped his clothing. Royall refused to return it until granted an interview. She clearly received one!

Warren Harding the Gambler Who Liked to Party

Warren Harding had a love for women, drinking, and gambling. According to Alice Roosevelt Longworth (daughter of Theodore Roosevelt) "the air heavy with tobacco smoke, trays with bottles containing every imaginable brand of whiskey, cards and poker chips ready at hand-a general atmosphere of waistcoat unbuttoned, feet on the desk, and spittoons alongside" described the scene she found at one of his shindigs.

Unfortunately, Warren Harding's love for card games did not mean he was blessed with a golden hand at winning. He once bet an entire set of White House china at one of his card games. Instead of winning big he lost all of it.

Ulysses S. Grant had a need for speed

Ulysses S. Grant liked going fast so much he was once fined for speeding. What kind of car was it in? No car. He was speeding around Washington D.C in his horse and buggy when he was stopped. Upon recognizing his face, the man was reluctant to fine a president. Grant told him to "do your duty, my good man" and received his fine of twenty dollars. Then was forced to walk all the way back to the White House.

Lyndon B. Johnson (LBJ) was surrounded by LBJ's

Lyndon Baines Johnson's nickname LBJ was not reserved for him alone. He insisted all of his immediate family share the same initials. Although his wife's name was Claudia Alta Taylor her nickname prior to marry Johnson was "Lady Bird." Both of their daughters would follow in the initial LBJ tradition as Lynda Bird and Luci Baines. Even his poor dog was an LBJ from being called Little Beagle Johnson.

When interviewed about his strange habit, LBJ merely stated having an entire family with the same initials made monogramming much cheaper.

In January 1992 George Bush Sr. would forever go down in history for vomiting on the Japanese Prime Minister, Kiichi. Kiichi had welcomed Bush along with over 100 diplomats to enjoy a state dinner at his home when the event took place. President Bush was attending despite having flu-like symptoms and ended up fainting. Unfortunately, before fainting he caught sight of the Japanese beef steak entree and projectile vomited directly onto Prime Minister Kiichi's lap.

The whole scene was captured by ABC and the world got a full view of the event to laugh about for years to come (poor Bush Sr.). Although it was a disaster for Bush Sr's dignity, the dinner did not mean complete failure. His upchuck was the beginning to a new phrase coined by the Japanese. Bushu-sure is literally translated, 'to do the Bush thing' and will always be a vocabulary reminder of Bush's famed visit to Japan.

Bushu-sure. I like it! I also recall reading somewhere that Woodrow Wilson used to go to sleep every afternoon with his feet on the Oval Office desk. I can only dream of being able to pull that stunt! 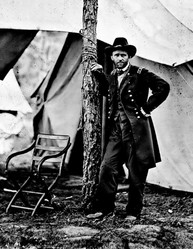