If like me you have are a massive fan of Downton Abbey then you probably have others on your gift buying list this year who are equally big fans.

Or perhaps you want to give some hints to friends and family about what you would like for Christmas or your Birthday? Then our selection of Downton Abbey Gifts is bound to delight!

When it comes to buying a gift for someone who is an absolute fan of the Downton Abbey series, then there’s no simpler task.

There are several options that one can consider, many of which are inspired by the very elements taken directly from the episodes of the British period drama. Check out some of these Downton Abbey gift ideas that are sure to please any fan of the show.

Just when you thought all the popular British drama had to offer its fans were DVDs and T-shirts, you realized there was a whole world of Downton Abbey merchandise you’ve yet discovered.

Their production has taken extensive measures to reach out to as much of its audience as possible and on so many levels. There are things for adults, men and women, children, and almost everyone you can imagine. You can’t help but to applaud the companies in their efforts in making Downton Abbey as real and as tangible as they’ve made it thus far.

There are so many different items and products available in stores and online that will make the average Downton Abbey fan’s head spin with excitement and below are just a few of what you can get your hands on.

First off, let’s start with beautification because that’s what many of the female fans of the show are really interested in. Downton Abbey’s beauty and cosmetic lines include products such as lip gloss in shades of velvet mauve, claret red and precious gold, body lotions, nail polish, bath crystals and other bath essentials. Now you can look, feel and smell like the women of Downton.

You can also add some aristocratic bling to your jewelry box with Downton Abbey jewelry that includes a wide range of designs inspired by the jewelry worn on set. Many of which display “authentic details and motifs from the late Victorian and Edwardian eras” as one vintage jewelry company explains it. And since these are mere imitations, you’ll find that their quite affordable so taking out a second mortgage on your home won't be necessary.

A product with a wider gender appeal would have to be the selection of wine inspired by those the Crawley family delighted themselves with while hosting dinners, parties and other gatherings on the estate. Claret, blanc, merlot, and chardonnay are just a few wines you’ll find under the Downton Abbey name.

And if you’re not much of a wine drinker, then you’d be happy to know that a selection of tea is also available; Estate Earl Grey to Grantham Breakfast Blend and English Rose tea are some you’re sure to enjoy during a quiet afternoon in the garden.

The Perfect Downton Abbey Gift For The Cook

You’ve heard how they talk; you’ve seen how they dress; now it’s time to taste how the good people of Downton eat. Enjoy the many unique dishes featured on Downton Abbey right at your very own dining room table.

Get a taste of how both the upstairs and downstairs residents of the estate fair when it comes to delicious cuisines. There are over 150 delectable recipes in The Unofficial Downton Abbey Cookbook, some of which include delights such as Very Vanilla Rice Pudding, Decadent Chocolate Almond Cake, Sybil’s Ginger Nut Biscuits or Ethel’s Crepes Suzette.

For those with heartier appetites there are also dishes like Mrs. Isobel Crawley’s Smoked Salmon Tea Sandwiches, Mr. Bates Chicken and Mushroom Pie, Filet Mignon with Foie Gras, and many more. Serve your family and guests snacks, entrees and desserts worthy of aristocrats with the help of this one of a kind cookbook.

If your girlfriend, wife, sister or cousin loves bags and also loves watching Downton Abbey then the Downton Abbey Highclere Castle tote is the perfect gift for them.

It combines both their love of accessories and British period drama into one high quality, heavy-duty tote bag which is made from 100% cotton canvas.

It’s easy to clean and maintain plus it allows you to carry your things in aristocratic fashion.

Have you or someone you know ever eyed the fabulous jewelry worn by the upstairs residents of Downton and wished you could own such extraordinary vintage luxury pieces too? Well now you can and it won’t even cost you an arm and a leg.

This beautiful blue sapphire silver bow necklace was inspired by the Edwardian era of Downton Abbey and makes a wonderful anniversary, birthday or holiday gift for that special someone.

The pendant features a blue sapphire crystal, adorned with a silver bow on top and an adjustable silver chain. Everything comes packaged in a deluxe Downton Abbey collector’s card, ready to give.

Keep Your Gift In Mind Every Day Of The Year

Start the year off right with a Downton Abbey 2015 calendar. Now you can enjoy your favorite British drama everyday with high quality images of the Crawleys, their servants, and the beautiful Downton estate and its surroundings all laid out on full color photographs.

Included in the calendar are still shots taken straight from the episodes, real historical facts, dialogue and quotes from the show, character bios, period trivia that will both surprise and fascinate and much more.

This spectacular Christmas ornament is the perfect gift for any fan of Downton Abbey. It’s a small scale model of the Highclere Castle which is featured on the show as the Crawley’s beloved Downton estate.

The ornament is made from high quality resin and stands approximately three inches tall. It’s also very detailed and captures the magnificence of the castle from every angle.

The ornament is an officially licensed item by Downton Abbey and would make a great addition to any fan’s collection.

Will You Be Buying Downton Abbey Gifts This Year?

We get this over the computer, and my wife likes it. I believe she finally got caught up on past episodes. 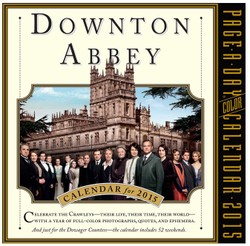 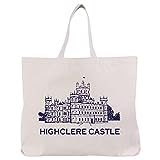 Downton Abbey has become a firm favourite around the world with its focus on the world of the Crawley family and their servants. Two worlds are explored as the story unfolds.
56%  6   5 pkmcr
British TV