You may remember the acclaimed British drama television series Upstairs Downstairs that ran in the early 1970s. It was a story about the lives of servants who were “downstairs."

Upstairs Downstairs was originally produced by London Weekend Television in the early 1970’s and later on brought to life again by the British Broadcasting Corporation (BBC) in 2010.

Upstairs Downstairs ran for five series during December 1971 to December 1975. It has been nominated and won many national as well as international awards for best drama series. Despite its British roots, it successfully won the hearts of many, especially Americans.

After the series ended in 1975, there were many attempts to make spin-offs of the show. But many failed to make it onscreen and the only one that did was short lived and did not achieve success anywhere close to its predecessor.

It was not until August of 2010, more than 40 years later, that a new production of Upstairs Downstairs was in the works again. A year earlier, BBC announced that it would create two ninety-minute episodes of the series, which later was changed to three one-hour long episodes.

The new episodes of Upstairs Downstairs (2010) debuted on December 26, 2010. It was received with mixed reviews. Many who hadn’t seen the original series gave it high reviews for its interesting plots and captivating scenes while those who had been strong supporters of the 1970’s production believed that the episodes were not relevant and didn’t do the original series of Upstairs Downstairs justice.

Regardless of public opinion, it was still deemed a success by the writers and producers of BBC. Due to the response to the 2010 production, the BBC decided to commission another six one-hour long episodes of the drama to be broadcasted in 2012.

Books, soundtracks, videos and DVDs of the original as well as the remake of Upstairs Downstairs are now available at your local bookstore and movie retailer.

Upstairs Downstairs is one of few dramatic series that has withstood the test of time and has successfully crossed over to the new millennium. To this day, many are still discovering the interesting story that this drama presents. Whether you preferred the simplicity and timelessness of the 1970s version or the amazing cinematography of the 2010 rendition, it’s no doubt that the intrigue of Upstairs Downstairs has not been lost and will continue to captivate audiences both young and old.

Which Upstairs Downstairs Did You Prefer?

If You Loved Upstairs Downstairs You May Enjoy....

If You Like Upstairs Downstairs Then You Will Love Downton Abbey

Are You An Upstairs Downstairs Fan?

I just finished watching the new series on DVD and find it very disappointing. No clear storyline, loose end and overacting. It looks as if this was supposed to be the set-up for a much longer series. If I am well informed lady Eileen Atkins, was not very pleased with the series and did not want to continue.

Yes, definetely. I bought the series about a month ago and am now watching two episodes a day

Does anybody recall a conversation between the nanny and one of her erstwhile wards, where nanny dismisses the now grown up child, with words to the affect ..
" I'm not interested in you after you leave the nursery, you become different, not nice"?

I used to watch Upstairs Downstairs on Canadian TV, it was a great TV show. I didn't know it was from the 70's, I watched that in the mid 80's. I might have a try with the new version.

A timeless classic. I prefer the original which occasionally airs on the UK Yesterday channel

I loved all the original Masterpiece theater dramas. This was one of my favorites along with Poldark and Duchess of Duke Street. 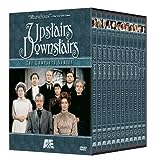