In recent years Downton Abbey has very quickly established itself as a classic British TV Show that is loved around the world. Here we take a look at Season 1 and the characters.

Downton Abbey chronicles the lives of an aristocratic family and their servants who all live on or around the Grantham estate. Set in the late Edwardian era in Yorkshire, England. The story revolves around the heirs to the estate and their willingness to do whatever it takes to keep it in the family. Written by actor and writer Julian Fellowes, it made its onscreen debut on September 26, 2010.

It has been named one of the most successful British TV Shows since the early 1980s and entered into the Guinness Book of World Records as the 'most critically acclaimed television show' in 2011. The cinematography boasts of beautiful scenery, elegant costumes and skillful directing.

The cast who played the residents of Downton Abbey were brilliant and captured the very essence of who they were meant to be, often evoking strong emotions amongst viewers. It’s not hard to start developing points of views for individuals; you either love them or hate them. Which many would agree, is what makes for a really great watch.

You can’t help but to be sucked into the dramatic experience when watching Downton Abbey. The amazing scripts, dialogues and scenes completely enrapture you and you feel as if you’ve truly stepped into that era. The tone of Downton Abbey is very balanced, just enough drama to keep you intrigued and just enough downtime to help you recover from the emotional roller coaster.

Though set in a different time period, viewers can easily relate with the joys and struggles that the characters experiences. Every moment reveals someone’s true character, their motives, their pain, their strengths and their weaknesses.

The vulnerability and sincerity of each character, whether good or bad, is absolutely captivating. One of the most moving and dominant figures in Downton Abbey would have to be the Dowager Countess played by pioneer actress, Maggie Smith. Smith delivers such a strong performance and the interpretation of her character is spot on.

It’s no wonder that almost 12 million viewers tuned in to watch the first episode. Downton Abbey has since won many awards and recognition worldwide. It surpassed rankings and repeatedly broke records for a period drama TV series.

Above Stairs and Below Stairs

There are, as one would expect, two very different societies at Downton Abbey which depend on each other for so many aspects of the lives and activities. Let's take a look at them as we first encounter them in Downton Abbey Season One.

The Family Above Stairs

As well as the family unit, we are also introduced to the wonderfully acerbic elderly dowager The Rt Hon Violet, Countess of Grantham. She is Lord Crawley’s mother and she is never afraid to speak her mind about anything and everything.

The Family Below Stairs

The servants that are responsible for the successful running of the household may not be related to each other by blood, but they spend all of their waking hours together working as a close knit family in order to ensure that the family above stairs are looked after as soon as they awake until they go to sleep at night.

We meet the very strict housekeeper Mrs Hughes and Mr Carson, the butler, as well as the assorted housemaids, footmen and kitchen staff. Everyone has a story to tell and we discover, for example, the moving history of Mr Bates, the personal valet to Lord Crawley.

The Main Characters Above Stairs

The staff of Downton Abbey is charged with catering to every whim of the Crawley family. This family consists of Lord Crawley, his wife the Countess, and their three daughters Lady Mary, Lady Edith and Lady Sybil. A frequent visitor to the Estate is the dour faced dowager Countess Violet who is the mother of Lord Crawley.

Lord Crawley’s official title is the Earl of Grantham. He is responsible for the running of the Estate and for the well being of the people who live in the area. When we were introduced to this character during the first series of Downton Abbey, he had to deal with the possible loss of the family’s inheritance due to the lack of a male heir. He is surrounded by strong willed women but remains level headed and determined to sort out his family’s finances.

The character of Lord Crawley is played by Hugh Bonneville, who has had plenty of experience acting in period dramas including with performances in Jane Austen’s Mansfield Park, Doctor Zhivago starring Keira Knightley as well as the modern film comedy Notting Hill starring Hugh Grant and Julia Roberts.

The most well known figure to feature in Downton Abbey has got to be the actress who plays Countess Violet. As the mother of the Earl of Grantham, she visits the Estate quite frequently and is always ready to share her opinion whether it is solicited or not.

The Countess has some great one-liners and is always ready to put people in their place, whether it is her own family or other visitors that she comes into contact with. This wonderfully witty role is played by Dame Maggie Smith. She has had an extensive career spanning over 50 years. These days she is most probably best known as Professor Minerva McGonagall in the Harry Potter films.

Discover The Real Life Above Stairs

The Downton Abbey Characters Below Stairs

There are a whole slew of characters that make up the staff that look after the household including the various housemaids, footmen and the kitchen staff. Two of the main roles that are integral to the running of the house are the butler and the housekeeper.

The Butler of Downton Abbey

The Butler is called Mr Carson. He is the man who is in charge of the whole staff. It is his responsibility to ensure that everything in the household runs as smoothly as possible.

It is a revered position and both the staff and the members of the Crawley family have huge respect for him. This role is played by Jim Carter who has appeared on the British stage in several plays, including work for the Royal Shakespeare Company, and in a whole host of television programmes.

Mrs Hughes is the Housekeeper. As a senior member of the staff, she works alongside Mr Carson and is mainly responsible for the female staff, which includes all the housemaids and the kitchen staff.

She is a very stern woman but does show her softer side on occasion. Mrs Hughes is played by Scottish actress Phyllis Logan. She has appeared in a range of television shows, both modern and period dramas, as well as films such as Shooting Fish and Secrets and Lies, directed by Mike Leigh.

The characters and the actors that portray them have helped to make Downton Abbey the must see period drama of the year. You will find that you are immediately hooked as soon as you start to watch the opening scenes of the first episode and the two box sets that are currently available will certainly keep you happily entertained.

There are several storylines that weave in and out of each other as the first season of Downton Abbey progresses. The predominant one focuses on the possible loss of the family’s inheritance. According to the law at the time, only male heirs were allowed to inherit.

Because the Earl only has daughters, it was agreed that a marriage between the eldest daughter, Lady Mary, and the cousin, who would be due to inherit upon her father’s death, would keep the inheritance safe and secure. However, this cousin dies on board the Titanic.

The series follows the meeting of Matthew Crawley, who becomes the new heir and his ongoing relationship with Lady Crawley. She is very hostile towards him at the beginning because she can not make up her mind whether she likes him or not and she is not happy about being forced into a situation over which she has very little control.

As the series develops we learn more about these two individuals as well as the rest of the family and the staff.

Watch The Original Trailer For Downton Abbey Season One

Are You A Downton Abbey Fan? 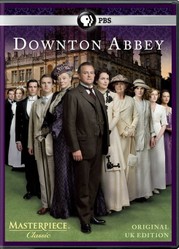 Downton Abbey has become a firm favourite around the world with its focus on the world of the Crawley family and their servants. Two worlds are explored as the story unfolds.
52%  6   5 pkmcr
British TV