How to Dress Edwardian Style

It's been called the Gilded Age and La Belle Époque. It is an era remembered for its elegance in ladies' fashion.

As eras go, the Edwardian period was relatively short. But in just a decade, fashion underwent something of a revolution.

The staid, stuffy look favored by the Victorians was shed in preference for a slightly more natural aspect. Of course, it took a lot of work to look that fresh!

The Gilded Age has a reputation for being a time of elegance and beauty; and big hats!

Most of what we're seeing in old photographs and paintings recalls the upper classes. In a time of strict class divide, those at the bottom of society could not have afforded such fashions.

Nothing was mass produced here. It was all made by hand or on sewing machines. Every item of clothing for the rich or poor was unique.

Fashions of the Gilded Age

When Queen Victoria died in 1901, the 20th century began in earnest. It was time to loosen some laces! 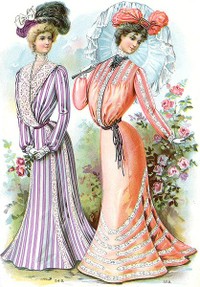 No new historical period begins and ends so neatly in reality. There wasn't a great clicking of fingers when one monarch died, heralding a new look overnight.

The fashions of 1901 therefore owe as much to the end of the Victorians, as to the dawn of the Edwardians.  For upper class ladies, this meant a huge controversy was raging, which they ignored at their stylish peril.

It was all about the corset. This had been a staple of the female wardrobe throughout the 19th century, but now it was under attack. Various societies had been formed to remove it entirely, but the popular magazines were urging women to keep the whalebone or lose their femininity.

The image above was printed in August 1901. It shows two wealthy women twisted into the highly common S-shape figure. This was all down to the corset hidden underneath their dresses.

The ideal waist size was just 15" (38.1cm). Not many women could achieve that, even with the help of hard whalebone and tough laces. The average that they settled for was 18" (45.72cm).  The S-bone corset also pushed against their spines, forcing their lower torsos forward.

Meanwhile, their hips were restrained backwards and their breasts up-lifted.

Clever tailoring helped complete the effect.  Puffy pigeon breast tops and dangling belts emphasized the shape.  The full, ground-sweeping skirts would be cut in such a way that they swept forwards from the back at the waist.

Unfortunately for early Edwardian fashionable women, it was killing them.

The rib-cage is meant to protect the internal organs.  In an S-shape bone corset (nick-named a 'health corset' without any apparent trace of irony), ribs were pressed into the organs beneath.

Displacement soon followed.  The lungs were pushed upwards; the heart was elongated between them; the stomach and intestines were shoved downwards; and the liver and kidneys were pressed flat.  In addition to this, the bottom of the whalebone dug into the lady's groin, ensuring that she sat up ram-rod straight; while the soft tissue at her abdomen was pinched painfully, even with the chemise underneath.

The early Edwardian upper class women could barely breathe, let alone eat. Fainting was a frequent occurrence, as was pulmonary disease. But there was no respite even at bedtime. Many ladies were encouraged to sleep in their corsets, in order to maintain their shape. If their bodies could be reshaped, then it wouldn't be so painful.

If you want an authentic look (and you are a masochist), then buy a corset pattern to achieve the S shape.

The rise of the Parisian Haute Couture was complete by about 1908. However, it met with earlier resistance. 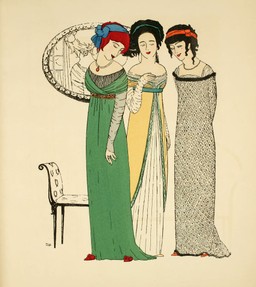 Paul Poiret had been designing clothes, in Paris, France, for nearly a decade before he founded his own House in 1903.

However, the very conservative upper class Edwardian women rejected his style at first. His ideas became more infamous than famous, before gradually creeping into acceptability.

By 1908, a Poiret Haute Couture garment was the height of fashion. He had introduced the highly popular tube sheath (or Directoire) dress!

When most people today think of an Edwardian lady's attire, they are probably picturing something by Poiret. His fashions were very popular amongst the female first class passengers on Titanic for a start.

He redefined what it meant to have a beautiful female form. His vision threw out the harmful S-shaped Health Corset and placed the emphasis on 'straight'.  Bottom, hips, stomach, torso and bust should all be in alignment, straight up and down.

The tailoring contributed to this effect.  High waist-bands, in the Empire fashions of the early 19th century, made a comeback a century on.  They fitted either under the bust or across the mid-riff, rather than actually on the waist.

Some dresses had no waist-band at all. This was a radical departure from the past, as Victorian fashions had been all about the waspish waist. But they had also pushed the hips and bust into the forefront.

Poiret advocated a more tomboyish look, to reflect the greater freedom of spirit of his female customers.

There were still corsets underneath, though the slimmer ladies could get away with not wearing them. In reality, we didn't lose corsets entirely until the 1930s.

Fashion stylist Sarah O'Neil demonstrates how first class ladies on the Titanic would have dressed, styled their hair and applied their make-up.

War was raging throughout Europe. Many women had more important things to think about than simply looking good. 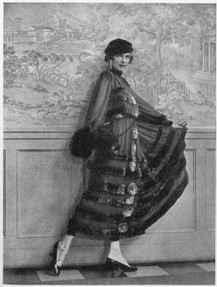 Paul Poiret retained his great influence over fashionable styles throughout the rest of the Edwardian period.

There were still some final changes to make. The major one was in the length of skirts. Until now, anything above floor-length had been seen as obscene. Bicycle riding and wartime changed that. Suddenly every dress rose to reveal the ankles. It allowed much greater mobility.

All rigid lines had gone. The 'draped' look was in with designs based on Russian peasant tunics and classical Orientalism.

Not everyone was pleased, of course.  The princesses of the Russian royal family were horrified by what they saw on offer in the European and American fashion houses!  They had lowly servants wearing similar things!

Also in vogue were dresses inspired by military uniforms.  Sailor top blouses, for example, or muted greens and browns. Checked and striped material was favored too, as it felt more serious, as befit the wartime conditions.

Sixty years before, everyone had ridiculed or outright condemned Amelia Bloomer's attempts to introduce female trousers.  Even as late as 1909, Paul Poiret could not persuade fashion conscious ladies to wear harem style pants.

Now they finally had their day. For the first time in history, the last Edwardian ladies started to experiment with trousers. Because of their daring, women today have the option between skirts or pantaloons, by whatever name!

Chart your way through the two decades of the Edwardians with these paper dolls.

More About the Edwardians on Wizzley

Book Review of And The Band Played On
Most Titanic books end with the sinking. That's when this one begins. It's the shocking, heart-breaking story of two families left behind.

Oh Rats! The First Hacker Intercepts Wireless in 1903
If you thought hacking was a new phenomenon, then you haven't met Nevil Maskelyne! LulzSec's great-grandfather exposed Marconi.

Drama and Tension at the London Olympics 1908
It's been called the first 'true' Olympic Games. But the 1908 event in London is known more for its controversies than its sporting achievements.
Updated: 03/16/2014, JoHarrington
Thank you! Would you like to post a comment now?
8

Victorian ladies weren't at all fashionable without a 'wasp' waist. That's where the corset came from. They just got tighter and more torturous, as time went on.

Glad that you didn't live then?

I really enjoyed your article, and loved that image with the internal organs under a corset. I never visualized it that way: scary stuff. And yes, no wonder they were fainting all the time! How crazy this whole tight corset thing was. Poiret looks daring with his tube dresses, but as you say, he just picked up the style of a previous era. But then, I'm wondering, when exactly got this corset get to be so tight, what were the influences?

That would absolutely own! We should look up how to contact them and ask about it!

Mythbusters. We must get them on it. :|

Yes, it is utterly horrific to imagine having to wear those corsets; and I'm very glad that trousers came into fashion in the end. I'm wearing my jeans right now.

It's an interesting theory that they were bullet-proof. I can't think who'd volunteer to find out though!

This was really interesting.

I remember reading that during the big s-corset craze women sometimes had their lower ribs removed to help with the size. Horrifying.

I also remember my drama teacher saying when he used to be a union stage manager, he helped make some outfits for women who were prostitutes in some play (I forget which). He made them by hand the old fashioned way. He said they were so tight he honestly wouldn't be surprised if they were a bit bulletproof. I can't imagine trying to live with something like that on me all the time.

I'm super glad those lades were daring enough to try out trousers/pants. I only own one skirt and am glad that's all. Kudos to them.

My friends and I were looking at 15" using a tape measure. You think you know how big 15" is, but it doesn't hit home until you've actually seen it in a circle. My waist is twice that!

Some of my ancestors had a haberdashery shop. They would have been selling these things!

Fascinating. I don't think my ARM would fit in 15 inches....But this is my grandmother's era. I remember her in tight curls and print sundresses. But she must have worn some of these styles too.

I feel quite honoured by that! Thank you for bookmarking this page. <3

What a great wizz! I love it! Saved for future reference :)

At the beginning of the 20th century, this was the historical period when Edw... 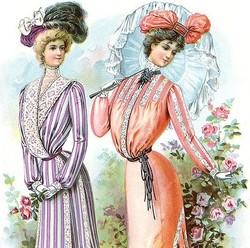 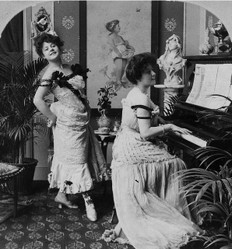 At the beginning of the 20th century, this was the historical period when Edward VII was on the throne of Britain. A lot happened.
100%  166   10 JoHarrington
Edwardian Era

Votes for Women or boats for women? In 1912, the press pushed to make it either/or and the Suffragettes were left floundering.
Loading ...
Error!