The big cats at Kanha National Park in Central India are object of deep admiration. The tigers and leopards are awesome in appearance and graceful in movement.

The hidden secrets of Indian Jungle never cease to intrigue. The big cats, tiger and leopard are majestic creatures that inhabit the jungle of Kanha. These magnificent predators are more than a hunting machine with mass of exquisite musculature. As tertiary carnivores they are an indispensable part of the ecosystem that has for centuries nurtured our souls and bodies.

The animals prowl in the deep confines of the forests and rule over their domain exhibiting brute strength and sagacity that is a must for survival in harsh conditions of nature. The tigers and leopards are the most charismatic animals on earth. For just one glimpse people travel thousands of miles to satiate their curiosity and put myths and intrigue to rest. For sighting of these majestic animals in the wild people bear hours of patience, tire their bones and enliven moments of extreme pleasure when the sightings fall true.

The tiger migrated from the snow covered regions of Central Asia into India about ten thousand years ago. It could not step into Sri Lanka due to the distance created by the tectonic plates by then.

In recent times, the tiger survives in a precarious state with a population of less than three thousand in the country. Kanha National Park is one of the finest reserve in the State of Madhya Pradesh. It is home to these big cats. It is a conservation unit under the aegis of Project Tiger Program in India.

About a hundred years and more, the big cats were in wild abundance. With the arrival of the British the decline started. Like elsewhere, the rulers initiated the vermin concept in India and thus began the struggle for survival of all the wilderness including the tiger.

The satraps, Maharajahs and Nawabs who made it possible

to enslave India joined in the fray. Wild animals were shot mercilessly in large numbers with the use of firearms. The forests were brought under the axe of civilization and loot.

Kanha survived. By the time Central Indian Highlands were fragmented the erstwhile sanctuary had received protection.

After independence a large protected area was created encompassing about two thousand square kilometers. This was declared as a National Park and subsequently as tiger reserve whence the Project Tiger Program was initiated here. Gradually with the introduction of conservation practices the forest began to recover along with animals that constituted the prey base of the predators.  The big cats are best protected here with a fabulous breeding records. 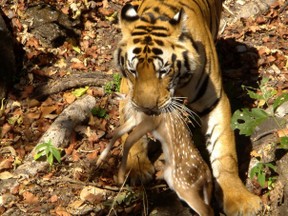 Some of the names I remember are Konda, Choti Mada, Badi Mada, Lal Aaankh, Munna and Kankata. Tigers are secretive animals and many complete their life cycle in anonymity. They are hardly ever seen or heard in the deep confines of Kanha forests.

Some tigers make their presence felt and emerge from the illusive tapestry of dense jungle. They are marked by the management, tourists and park guides and named. The big males that dominate large areas of the forest are seen regularly during the park rounds. These are the perfect epitome of the feline and named as per the characteristic features they exhibit. Many of these tigers are conditioned to human presence. This is due to frequent movement of the park management, forest dwellers and the tourists. Nevertheless they live out their whole breeding cycle normally.  Many tigresses complete their whole breeding cycles and give birth to number of litters during their lifetime. The phenomenon is witnessed by generation of humans, thanks to tourism in these parks. Tourism is a hub of activities that enables, nature lover, wildlife photographers and researchers to witness the awesome spectacle of wilderness which become landmark moments of study.

Naming does not takes place in case of the illusive leopards. They are marked by the area they frequent. Being smaller in size and overshadowed by its bigger cousin they are seen, photographed and forgotten.  Kanha and Mukki Zones offers the best leopard sightings in the reserve.

The tiger is one of the most able hunters in the animal world. It is a perfect hunting 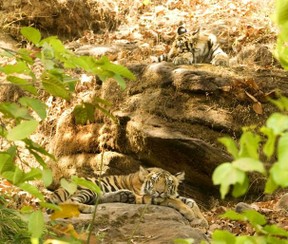 machine and apt to the task it has been created for. But unlike humans it kills only for food. Sometimes territorial fights are fatal resulting in death of the opponent.

Most of the adult male weigh anywhere from 225 kg to 250 kg. The females weigh around 100 to 180 kg.  The height is around two and half feet at shoulders this enable the animal to cross over the grasslands unseen.

The black stripes and orange color mixed with white offer amazing camouflage in the forest. The jaws with canine and massive paws are major hunting elements 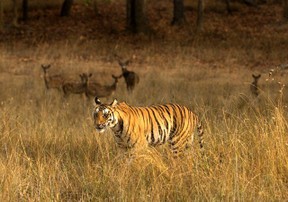 . The musculature is designed in a manner to accord force at the right juncture.

Being a solitary animal the union is only for reproduction. This is also the reason for the males being highly territorial. They mark their territory by scratch marking, scent marking through urine and feces and with the use of deafening roars.

After a gestation period of three months the female delivers a litter of three to four cubs weighing a little more than a kg and born blind. The eyes open after two weeks during the time they stay at one place giving enough opportunity to the hungry tigress to feed itself properly.

The male tiger guards the family but does not assist in the rearing.

The National Park is accessible from Raipur Capital of Chhattisgarh, Gondia in Maharashtra and Jabalpur. The drive from Jabalpur in Madhya Pradesh is about one hundred sixty five km via Mandla. This is the preferred route along with the drive from Nagpur. Most of the hotels are situated at Khatia and Mukki Gates.

The park safari timings are from predawn to 11.00 am and from noon to onset of sunset. The number of jeep entries are limited at each of the four zones. The zones are Kanha, Sarhi, Mukki and Kisli.

Before arriving the tiger tour at Kanha can be booked through the tour operators as well at MP Online Portal. Advance booking is required so book your ticket while planning the journey.

Besides booking your hotel one needs to hire a jeep for the safari. They are available for hire near the gates. The tour can be arranged with the help of accommodation you are staying at so that is not a big problem.

While on safari carry mineral water and food. Keep books on Indian Wildlife and birds. Wear light colored clothes and keep a good pair of binoculars.

It is all green over here in June due to monsoon. The torrential rains turn everything green here. Beautiful cubs and fawns are born in this season but no blue eyes. Butterflies frolic in the jungle painted in multiple colors. It is a fascinating spectacle.

pateluday, Thank you for all the practical information, pretty pictures and product lines.
Are forests and woodlands known for blue animals and plants in India?
Chicory and spring azure butterflies give blue colors to June here. So blue-eyed newborn kittens move around without standing out.
Would that be the case for blue-eyed young, such as the two little big cats in the second-to-last photo, in Indian forests and woodlands? Would there be blue-colored fauna and flora with whom and which they blend?
Otherwise, I would worry that they stand out until melanin pigments develop and their eyes change color, within about six weeks if they're like kittens here.

Nice images. How did they get the lion, leopard, and tiger to walk together in the poster?

Chennai (formerly Madras) is the fourth largest city in India and the capital...

Chennai (formerly Madras) is the fourth largest city in India and the capital of the southern Indian state of Tamil Nadu.
55%  6   5 pateluday
India

This is an article about Kanha National Park situated in Central India in the State of MP. The articles informs how to organize a successful and enjoyable tiger safari in Kanha.
Loading ...
Error!