Evolution of Combat is the brand new combat system within RuneScape. It is also one of the most controversial updates of 2012. Will it make or break the game? Time will tell.

Before I delve into the update I feel I need to bring you on a speedy history lesson in what RuneScape has been like during my time playing.

I’ve been a (RS) gamer since 2005. My main character was a member from March 2005 to April 2012 and managed to build up a significant amount of skill levels over a time of roughly 370 in-game days. With a combat level of 136 she was able to take on most monsters and even an occasional boss once in a while.
My all-time favourite slayer monster was Mutated Bloodvelds and I couldn’t wait to go there with my Gold Cannon and start the massacre.

“How can you love a childish game like RuneScape?”

Up until 20th November 2012 I was only able to speak for a friend and myself when I said that we liked this game for its simplicity in gameplay. Now I know I can speak for more people. Unlike many current popular games RuneScape was slow-paced, with simple point-and-click controls for movement and interaction, and the arrow keys to manoeuvre the game camera. RuneScape is an open world game offering the players choices in what they want to do, whenever they want to. If you don’t like certain aspects of the game you don’t have to use them. It has always been optional.

Combat in RuneScape has always been easy to understand. There are three types of combat styles – Melee, Ranged and Magic. Choosing one of these styles doesn’t exclude training the other two. Magic for instance can be used outside of combat. Teleporting and alchemy spells require medium magic levels and will aid in terms of money making and fast travelling.

Fighting dangerous Non-Player Characters (NPCs) could be done solo or non-solo depending on the area. When in a multi-combat area everyone could attack a NPC and everyone would get experience. The one who caused most damage was the one that got the kill and the item reward. If players choose to Loot-share everyone got an item reward.

Players in a single-combat area had a NPC all to themselves.

The graphics have dramatically changed for the better over the past few years. When I first started my own RuneScape career the graphics were so poor you could barely tell males from females. It had the same block-like shape as the first Tomb Raider game. But many players, myself included, didn’t care because no other game offered what RuneScape was offering at the time. It didn’t have “fancy” tool bars or abilities. Graphics aren’t always everything. If a game has good enough controls the game will be enjoyable.

Another aspect that at least appeals to myself is that RuneScape only have human characters to choose from. There are no classes or races that restricts your character in various ways. Feeling forced to study classes or races to make the “right” decision before even creating a character might put people off from even contemplating trying a game. This applies for those with no time to go in-depth with a game. Like adults, and RuneScape has always had many adults playing.

What exactly is the Evolution of Combat?

In essence, Evolution of Combat (EoC) is the overhauled version of the previous combat system (a.k.a RS2) and everything related to it. Gone is the easy point-click-and-wait-for-death combat that many liked. Gone is the possibility to take your eyes off of the screen for more than a minute during combat. The amount of damage done has been reduced to balance the introduction of an action bar and abilities. The abilities are then used to boost damage done to NPCs and to make combat more exciting.

NPCs have been given new aggressive attack styles that, in some cases, make it impossible to use safe spots as a mage or ranger. Almost everything a player has learnt up until 2012 in terms of combat has gone out the window and must now learn how to play the game anew.

Those who have managed to test the new system longer than I have patience for report that the game is now fully multi-combat. They also say that the one who attacks a NPC first is the one who gets the kill and the loot. I don’t know if this affects Slayer task kill count, but if it does Slayer just became much more difficult to train.

The developers offer a choice of using the RS2 combat style – an ability called Momentum. This ability multiplies damaged done to enemies for 20 minutes as long as no other abilities are used during that time.

RuneScape - Changes to Boss Hunting in the EoC

RuneShark explaining the ins and outs of Evolution of Combat and how it affects boss hunting.

How did the community react?

For the first time in the history of gaming have I seen talks of discrimination towards disabled people. It was an eye-opener.

After an update has been released to RuneScape the reaction of the community go though the following stages:

The same happened after EoC was released - with one difference. The amount of posts from players claiming to have cancelled their membership seemed to even top the exodus after Squeal of Fortune was released. The counter on the RuneScape main page showing current players online dropped to a new low of roughly 30,000 people online. Even after the bots were reset to handle the new update, the number didn’t go past 60,000 people during a European weekday. At any given time in the past, the number has been well over 100,000 people.

YouTube video’s like/dislike meter and various fansite polls also give a hint of the situation. Reports of large clans leaving have been made, as well as famous veterans throwing in the towel.

The most common opinion among the negative comments on the official forum is that the update has killed the simplicity of the game. Players feel the uniqueness of the game is gone and that veterans are being discarded in favour of newer, younger ones who prefer games such as League of Legends or World of Warcraft.

Many want the option to choose between the two combat styles and suggest separate servers for RS2 and EoC.

Reports from a minority even go so far as to call this update discrimination towards disabled people because they don’t have the physical ability to constantly press buttons to activate combat abilities while at the same time using their mouse to heal them selves more often than before.

Players with disabilities can no longer play RuneScape

So what is the solution?

That is the million Euro/Pound/Dollar question. Given how stubborn Jagex can be this will not be reverted any time soon – if at all. Speculations that Jagex is doing poorly in terms of revenue have been going around for a while. No one can answer this except Jagex, but if it is true not considering the long-term players, a.k.a veterans, is a highly risky move. Players already into other MMORPG’s will most likely not switch to RuneScape, and upset players leaving RuneScape will not recommend the game to a single person.

The way I see it, separate servers may be the only way to go right now.

Hope is the last thing that leaves a person!

Poll - Do you enjoy Evolution of Combat?

Poll - What is your speciality within RuneScape?

Thanks for the info, Carlos. I've completely lost track of RS since I quit 2 months ago. All the negativity on the forum was so toxic I couldn't function.
I've been looking for a game similar to RS too but can't find anything that doesn't involve races or action bars.

Hi. Thanks for visiting.
I have scoured the internet for one too but everything that looks interesting all come with action bars and abilities. I nearly signed up for Runes of Magic last night but came to my senses.

There's always 2006Scape that is rumoured to be opened up for the public during December. It's not my favourite era of RuneScape but it will due.

I think Fen Research is worth keeping an eye on too. Andrew Gower is working on two new games, one small and one large, and if he still has the same mindset as he did when making RS then his games might be worth waiting for.

If you're looking for extreme simplicity, Terraria isn't bad.

I've been in and out since Squeal but rarely as my main character. I wanted to stick around in case SoF miraculously went away. I also wanted to see what this new combat system was like since it's been so hyped. I have given it a fair try (just managed to finish an hour maging using Momentum) just so that I can say I have tried and I just don't like this. I'm just like you, I don't want to learn combat all over again.

I'm a hardcore camera angle switcher. It does not go well with clicking abilities.

The only positive thing I have found so far is the change to magic spells in terms of runes. The low level elemental spells don't require a combat rune anymore. This is positive news for f2p as crafting runes has always been a drag.

Let me know if you find a game that has similar traits to RS2. I have a friend who is extremely frustrated.

To be fair, I pretty much stepped out after Squeal of Fortune, and I was never that combat orientated in the first place. But friends of mine who are into their RS combat aren't happy right now.

I can't say that I'm thrilled by the idea of learning a new combat strategy, after having learned this one since 2006.

Real world trading had always been a no-no; in-game gambling had been discour...

Runescape players, disgruntled with the way the game's going, have recreated ... 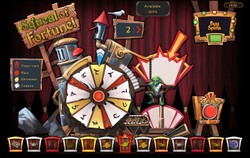 Real world trading had always been a no-no; in-game gambling had been discouraged. Then came Squeal of Fortune.
100%  924   12 JoHarrington
Runescape

Runescape players, disgruntled with the way the game's going, have recreated their own. RS2006 returns to the golden days of 2006.
Loading ...
Error!