When Bubonic Plague struck London in 1665, only one other place outside London caught the plague and that was 161 miles away, the sleepy, tiny village of Eyam. How?

So what was the connection? How did a tiny village become infected with The Plague? It was by a tragic accident .

The 1665- 1666 Bubonic Plague in London was the last great plague in England. It killed about 100,000 people in London about 25% of the population at the time. Eyam was much smaller in numbered population. The percentage loss was certainly no less than London. There were many plagues across Britain over centuries but the 1665 is the one mainly remembered. It was carried by fleas on the back of rats and spread very quickly. And this, is how it spread to Eyam, Derbyshire.

Here is tale of how the unselfish attitude and actions of a community saved hundreds by their self sacrifice, a beautiful tale of love.

Pronunciations  are Eyam … Eee -am

The Plague incurred  so much fear in London that when it struck, many evacuated the city, including King Charles 11 and his family. Those who could not, stayed behind and faced the disease.

The Bubonic Plague gave sufferers huge blisters called buboes which were full of infected pus and when popped spread the disease everywhere around . It was so infectious that death came quite quickly once it started. The children's rhyme "ring a ring of roses" is believed to have been based on the plague.

A pocket full of posies

We all fall down.

The ring of roses is supposedly the rash which starts the disease symptoms. The pocketful of posies are the posies that people carried as they supposedly warded off disease and infection. Atishoo was the sneezing which accompanied the disease and we all fall down refers to ...death.

Plague Doctors or Beak doctors patrolled the city and wore these costumes below to prevent themselves getting the disease. The beak was filled with herbs as it was believed that these would prevent the disease spreading.

The Plague arrives in Eyam

The Plague arrived in Eyam by cart. The local tailor had sent to London for cloth and old clothes that he could adapt. In this cart were rats and fleas and so the plague moved from London to Eyam by cart, 160 miles. That simple! The tailor was dead one week after receiving the parcel. By the end of September, 5 more villagers had died. 23 died by October.

The plague spread quickly in Eyam and when it was realised what was happening the local clergy decided that the people should die in the village by blocking the village off so the disease did not spread out of Eyam. No one came and no one left. They set themselves to die without help so as not to spread the disease.

The local clergy Rev Mompesson and Rev Stanley administered to the villagers as well as they could.  Rev Mompesson's wife, Catherine, also died. Church services were held in the open air so as not to spread any germs. This stone was where local villagers left food for the Eyam residents.

The Boundary stone (below) in Eyam museum is a replica of the one used during the Plague time in 1665.

This row of cottages in Eyam, was the first place where people died of the plague. Whole families perished very quickly.

In the old Eyam Church, there is a Plague Window. Look closely. The clergy are in the centre helping the people, there are people dying in bed and in the bottom right corner you will see two people separated by a river.

A heart breaking story is that of Emmott Sydall and Rowland Torre, an engaged couple. Emmott lived in Eyam and Rowland lived in nearby village Stoney Middleton.

When the village was quarantined off, the couple could no longer meet and so they used to "meet" at a valley ledge called Cucklett Delf so they could see each other at a distance but not actually meet. Emmott lived in a cottage near where the Plague started. Her father John Sydall and four of her siblings were among the first victims.

Emmott stopped coming to the appointed place across the valley from each other but as of April 1666, Rowland continued to go to their meeting place, every day to see if she came. She never came.  Rowland was one of the first people to go to the village in 1667 when the village reopened. Emmott had died months before hand.

Their story is depicted in the window.

Not specifically connected to the Plague in Eyam but equally interesting... This is the Celtic cross although probably Saxon that stands in the churchyard. Look at the carvings and how old this is...about 1000 years.

Interestingly, it has been stated that descendants of Plague village Eyam survivors have very well developed immune systems and cannot catch AIDS. I wonder how true this is.

This is a tale of self-sacrifice. Rev Mompesson persuaded the villagers not to evacuate Eyam as he feared that they would spread the plague into the north of England. By cutting themselves off from the outside world they knew it would mean death for most of them.

This is a beautiful village to visit and has much to offer.

Rats can still carry Weil's disease, which can be fatal.

Yes I think people's mistrust of rats and such things is passed down to us from previous generations fear of Plague .

Some years ago Tim Severin, who was writing "In search of Ginghis Khan, went to Mongolia, where the guides told him that the marmots that inhabit the Mongolian steppes are a reservoir of the plague bacterium, Yersinia pestis.

Derdriu
Oh my word you have answered my question. I wondered if there had been any instances of Plague Stateside and yes it seems there still is.

I am wondering what happened to Rowland Torre. I may look it up when I get a minute .

Veronica, Thank you for the backstories and the poignant pictures. Does anyone hypothesize or know what happened to Rowland Torre afterward? Is Emmott a common feminine name?
On this side of the pond, bubonic plague remains a threat in small pockets of New Mexico!

Indeed, great point.
It was the insects that lived on the rats that carried the plague.

Eyam was indeed the only place outside London to catch Plague in 1665. …. even 160 miles away.

I would have thought the clothes could carry the plague without the help of the rats. Interesting that they were involved.

Tolovaj
Yes it is fascinating to see how this dreadful disease spread in waves across Europe. It is a testament that the impact of the disease that it is so remembered as being horrific. Modern medicine has done a lot to stop such things.

If the tailor hadn't sent for cloth or if no rats had been the consignment, then the Eyam story would not have happened. Lots of ifs.

Thank you for posting.

Plague was so horrifying it is still remembered in our country as well. n some areas more than a third of population died. We still have plague columns in several towns and people prayed to six saints at once. Thanks for sharing the story of eyam.

Home to the redoubtable Bess Hardwick, Hardwick has not one but two fine Hal... 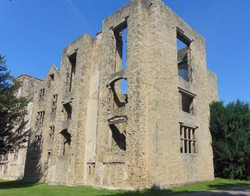 Home to the redoubtable Bess Hardwick, Hardwick has not one but two fine Halls. I visited with my family recently on Saturday.
86%  17   7 Veronica
Travel & Places

Edale is a beautiful village in Derbyshire, ( pronounced Darbishur ) England. I visited it today with a special friend, someone I can be myself with and tell anything to.
Loading ...
Error!