A random piece of writing, rambling through logic when confronted with nature.

Thoughts and ideals buried so deep that change can not be imagined. The heart that beats inside the empty shell slowly turns to stone. Devout in belief and strong in pride the man who will not bend against the coming storm will instead become a beacon of despair preaching a gospel that is skewed and mired in smaller forms bent to make his point.

His face of stone

The face in the Stone

Thoughts and ideals buried so deep that change can not be imagined. The heart that beats inside the empty shell slowly turns to stone. Devout in belief and strong in pride the man who will not bend against the coming storm will instead become a beacon of despair preaching a gospel that is skewed and mired in smaller forms bent to make his point.

She waits upon him hand and foot, for she knows no other way. His has been her command since bound by tradition into a vow that is for life. Sacrificed so much just to believe she lives not in lie. He has always been her shield and her his meek mouse. The protector against imagined threats where faith alone should doubt. This is her lot, her life she spent, until laying down do die. He is left alone. Granite, he could not cry for her, could not cry for himself, the thoughts acquitted by god in hand, the maddened mind and lost soul, bitter to the end.

So much more was promised, in desperate solitude. Belief the only tool of salvation ever learned, but splitting hairs became too much work and the mind would not forgive the thought that it may be in error of interpreting gods command. It seemed so clear back then. Written word upon the page. Scriptures showing man the way, but a closed mind sees not hope against the stark convictions laid within the heart. The heart will not hear the retort of another point of view. Harbouring, instead, the deceit of self, wrapped in fear, and the truth is slowly shut out. When fear speaks now, the only voice in the man's heart and soul, it rings with the sound of justice and truth, and that becomes the law of the land. Fear replaces truth by feeding the psyche exactly what it wishes to hear. In turn, self-fulfilling prophesy takes up the call of god until all that is heard in the house of the lord is the words of a wronged man.

When exactly the heart turns to stone is never clearly defined, but once the heart is hardened the rest is not far behind. Here, stand the face of stone, eyes shut against the sky. Be still the sun warms the rock and the mind remembers the sun. Perhaps in time the mind will remind the heart that it once lived too. A closed mind hears not music, sees not beauty, and rests upon the pillar of madness. This face of stone stands witness, for the rest of us to see. Where life once stood in abundance, now stands a statuary symbol of unbending fear. This face may be someone that any of us once knew. Fallen down like a false idol sent to weather every storm. Cast into the emptiness and ruled over by its own fear, until all it ever knew was the voice of self, disguised as the voice of god. Epitome etched with moss...set against the rising tide, it too shall crumble into the sea, thoughts scattered upon the beach like broken shards of glass. Rolled around until polished... but never complete again. 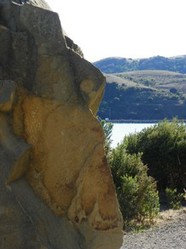