Shmoo and the thing on the roof:

This is the story of Shmoo, who is a cat. The story is about what happens when Cat is woken up from a nap, and her adventure to set a wrong to right.

Between the showers that keep wetting the land we call California, the sun peaked out enough and Shmoo has found a little pool of golden warmth to curl up in for her thirteenth mid-morning nap. It seems that she no sooner got into a comfortable spot, groomed herself and closed her beautiful blue eyes then something large began to walk across the roof.

The Thing on the Roof:

Between the showers that keep wetting the land we call California, the sun peaked out enough and Shmoo has found a little pool of golden warmth to curl up in for her thirteenth mid-morning nap. It seems that she no sooner got into a comfortable spot, groomed herself and closed her beautiful blue eyes then something large began to walk across the roof. It is completely unlucky to be woken up during the thirteenth nap, and the omen of bad luck is something that cats take seriously. The happenstance occurrence leaves only one clear course of action and Shmoo like any other normal cat headed straight for her favorite hidden spot. The cupboards third door on the left and beneath the large fish tank is the exact location of Shmoo's hidden spot.

Many people believe that when cats enter their hidden spot that they are afraid, but I must take this opportunity to point out the folly of this crude thought. Cats are very religious, and their hidden spot is not a refuge from things that scare them. The hidden spot for cats is a place of deep worship. On this particular day, Shmoo had been woken during her thirteenth mid morning nap, and this is a tabooed omen of very bad luck. It was with this heavy weight that Shmoo entered her hidden spot and began to try to outsmart the bad luck that was trying to influence her day.

I suppose we should talk about luck. The concept of luck to a human is really a misguided attempt to relate to cats. Luck to a cat is an entirely different creature... or should I say creatures. Luck is a combination of two entities that apart represent good and bad; however, together they represent luck. It is difficult to get these two beings to work together because they are very much polar opposites. Good tries to enhance the quality of life by bringing pleasantries to all creatures. Bad tries to undermine Good's efforts and so it brings the unfortunate things as small presents to all creatures. One has never seen Good, Bad or Luck, but we have all seen their work. Humans think that Luck is something they can control, and they make great attempts to influence Luck. The feat is an impossibility that does nothing but wastes time and effort when they should really be paying attention to cats. Cat's, on the other hand, see and know all, and that is why they keep us humans around. People have speculated that cats use them as a mere convenience of providing food, but the real answer is that people are so misguided that cats were sent to keep them out of danger.

Inside her hidden spot, Shmoo began to seek out the string of bad luck. Bad and Good both leave behind a spiritual string that ties them to their deeds. If humans paid even the slightest bit of attention to the concept of Good and Bad, then they too would be able to see the strings that these spirits leave behind. The string that is left behind is the only means by which the deed can be undone. This is why cats are fascinated with strings. They must hone their skills to be able to master the spiritual strings left by the creatures Good and Bad. So it was that Shmoo began the spiritual hunt to find the string that Bad had left for her. The process begins with a very low chant that humans misunderstand and interpret as a sign that the cat needs them. Nothing could be farther from the truth and their consistent attempts to calm the cat is often met with a hissing sound that eventually drives the human away. It is not the fault of the human for they have no way of knowing that their actions are being guided by Bad as an attempt to foil the superior cats attempt at unraveling the string of Bad luck.

The chant is nothing more than a key that opens a spiritual door which allows the cat to seek out the thread in a realm where the cat is even more powerful than here on earth. Following the chant Shmoo entered the spirit world and began to seek out the thread of bad luck. For cats, this is a simple process because the string is attached to their spirit and they can simply just follow it backwards. The hard part is that Bad or Good wrap all of their strings about until many different strings become knotted and tangled. The problem is trying to decipher which string is which and where it leads too. Following her string of Bad luck, Shmoo set off traipsing through the world of Nod for that is what cats call the spirit world. They often appear to be asleep when they are in Nod and thus it is very unwise to wake a cat. This was a warning that was given to the humans many eons ago, but the poor things misinterpreted as letting sleeping dogs lie... The cats have never forgiven the humans for this blunder, but they pretend not to notice. This is also the best explanation as to why cats and dogs disagree so much. Dogs are the tool of Bad and were designed specifically to disrupt the prayers of cats.

The Tangled Know of Luck

It was on this journey through the spiritual realm that Shmoo came face to face with Bad. Normally this would be a very unpleasant experience for both the cat and for Bad. As luck would have it, Bad had accidentally tripped over its own threads of Bad luck and was miserably tangled up to the point where it could hardly move. Bad was utterly helpless, and Shmoo could have very easily ended the poor things misery by pouncing. Cats; however, have a great and keen sense of right and wrong but more importantly they can not pass up an opportunity to lecture people, spirits, dogs and each other. So it was that Shmoo began her lecture on the helpless Bad. Ranted and raved she did until finally Bad gave up answering her. Perplexed, Shmoo asked one last question. What is wrong with you? The answer may be something that even Shmoo was unprepared for. Bad, you see, is a product of jealousy and the needy creature the product of an unbalanced sense of competitiveness.

Bad began its answer a long way back in history at a time when both Good and Bad were younger spirits. As the spirits aged, the world changed, and the spirit of Good developed a tool that it would not share with its Sibling. At this point in its history, Bad did not have a name nor did Good. They simply were. Good began to use this new tool to influence other creatures and the creatures like and praised the spirit of good. The selfish nature of Good hurt the feelings of Bad, and between them a jealousy began to form. The parental spirits tried to intervene, but their attempts only made matters worse. They coddled Bad and lectured Good but to no avail. The path of these two spirits had already been set. It was not too soon afterward that Bad tried to imitate Good and developed a tool that did much the same thing as good. Sadly, however, the tool was fueled by the jealousy between the two brothers and began to work very differently. This is the defining moment where Good became good and Bad became bad.

Shmoo listened for a time and then saw the crux of the problem. She imparted her wisdom unto Bad. She said look at yourself and all that you have created. This mess you find yourself in is your own doing. This is a sign from those above you that you must develop a better tool and let go of all of this jealousy you have for your brother. It is high time that you two spirits grow up and the jobs that you were intended to do. You find yourself in this spot unable to defend yourself, and I a predator could easily send you back to the beginning. Make me a promise and I will set you free otherwise you will need to go back to the beginning and start all over again. Bad listened and cried, but the piteous sound had no effect on Shmoo. Bad Gnashed its small teeth together and tried in vain, to free itself, but the mountain of bad luck was just too great. With a final sob, the spirit agreed to make a promise to Shmoo. She asked the creature to promise to change its ways to try to be good and to develop a new tool. The creature was old, and Bad was all that it knew. It was perplexed and frightened. That is when the other cats began to come. They felt the tension and sought out the spiritual doors. Soon the miserable creature was surrounded by millions of cats and more cats kept coming. It was that very moment when all the tension of the spiritual realm had built that Shmoo saw the problem. She turned to the cats and said This creature is so old that it knows no way other than that of its past. It knows not how to change or to grow. It is up to us cats to teach it. What say all of you? The cats all were silent for a time, and then they too saw and began to purr their yeses. It would be the cats job to teach the spirit of Bad how to grow and change. This was the first time in a great deal of time that the spirit of Bad felt the warmth and accolade that the spirit of good had always known. So it was that it agreed to Shmoo's terms and made her the promise that she asked. 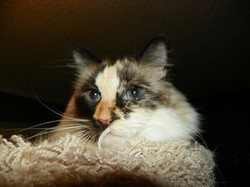 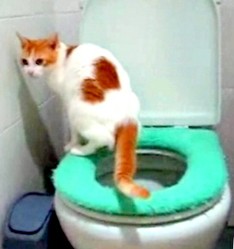 Ditch the litter box forever. If I can potty train my kitty to use the toilet with the aid of the CitiKitty, so can you!
100%  23   13 CruiseReady
Other Cat Info

The view of a long time cat lover on indoor cats and outdoor cats and which kind is best for each environment.
Loading ...
Error!