Film Review of Curly Top: How Characters Played by John Boles and Shirley Temple Dance and Sing Their Way From Lakeside to Southampton in The 1935 Film Version

Lakeside trustee James Wyckoff (Etienne Girardot) belittles heating drafty rooms. He favors selling Lakeside his company’s cough mixture. He hears Elizabeth mimicking him in her sister’s (Rochelle Hudson) composition, “Animal Crackers in My Soup”. He intends to send such a “wicked child” to a public institution. Mary Blair labels him a “hateful” and “mean” man.

Edward and Mary enjoy composing songs. The storyline gives Edward credit for composing “It’s All So New to Me” and “The Simple Things in Life” and Mary credit for “Animal Crackers in My Soup”. It gives no credit for “When I Grow Up”.

Edward buys Elizabeth a pony cart. He pays Mary’s music school tuition. He showers both sisters with clothes, jewelry and silk pajamas. He takes them water-skiing.

Shirley Temple performs "Animal Crackers in My Soup," followed by her famous "Oh my goodness!" exclamation.

Elizabeth's benefactor showers Elizabeth and her sister Mary (Rochelle Hudson) with gifts, including a hula costume and ukulele. 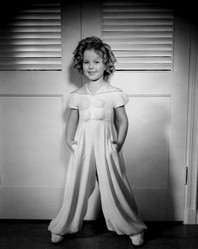 Diaries and divorce impact characters played by David Niven and Shirley Temple in the 1949 film version of "A Kiss for Corliss."
33%  0   5 DerdriuMarriner
Family Movies