In the 1934 film version of "Baby Take a Bow," characters played by James Dunn and Shirley find stolen pearls.

New York City native James Howard Dunn, scion of a Wall Street stockbroker, traded Wall Street for vaudeville after three years in the family business. His dedication to his craft, despite ongoing struggles with alcoholism, culminated in receiving an Oscar as Best Supporting Actor for his role in "A Tree Grows in Brooklyn" at the 18th Annual Academy Awards in 1945. His memorable role as deadbeat Earl Morgan, a concoctor of "get-rich-quick" schemes, in "It's a Great Life" from 1954 to 1956 expanded his acting range and endeared him to television audiences.

After he appeared in the dramatic feature film "The Oscar," released on March 4, 1966, James' film career abruptly ended with his death, two months' shy of his 66th birthday, from complications following abdominal surgery.

Eddie and Larry are fired on Shirley’s birthday. Eddie and Shirley dance and sing “On Account-a I Love You”. Eddie gives Shirley the best gift: a ballet dress, not dollhouses or roller skates. A radio news release interrupts to report the Carson necklace theft. Larry recalls Popular Mechanics‘ article about Zulus sewing jewels under their skin.

The next morning, police chase Trigger. The necklaces gets dropped in:

Welch halts the search of Eddie’s apartment. He is back before Eddie and Kay open the sweeper. Welch opens the sweeper, which maid Anna (Lilian Stuart) previously empties.

Shirley finds the necklace in the garbage. She goes to show Eddie. Trigger is left restrained while Shirley’s parents get the police.

Trigger convinces Shirley to release him by:

Shirley Temple & James Dunn-On Account A I Love You

James Dunn and Shirley Temple sparkle in singing and tap dancing duets in "Baby Take a Bow": they appeared charismatically together in four movies in 1934.

How do characters played by Gary Cooper, Carole Lombard, and Shirley Temple l... 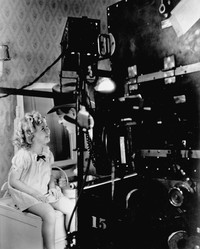 Diaries and divorce impact characters played by David Niven and Shirley Temple in the 1949 film version of "A Kiss for Corliss."
61%  2   8 DerdriuMarriner
Drama 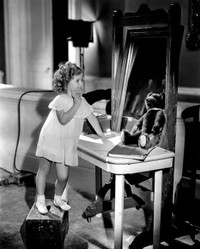 How do characters played by Gary Cooper, Carole Lombard, and Shirley Temple like living in Paris in the 1934 film version of "Now and Forever"?
Loading ...
Error!