In the 1934 film version of "Bright Eyes," characters played by James Dunn and Shirley Temple fly The Good Ship Lollipop

An orphan is lucky in making friends with a pilot and a tycoon.
• She is unlucky in mourning both parents’ deaths.
• Will doing right deeds, eating spinach, and thinking right thoughts keep her pretty inside and out in “Bright Eyes”?

The comedy drama lasts 83 minutes. Its distributor was Fox Film. Its NYC-premiere and USA-release dates were December 20 and 28, 1934.

The movie begins with five-year-old Shirley Blake (Shirley Temple) celebrating Christmas in a taxiing plane. She grieves her father’s death in an airplane crash. But she loves:

She sings “On the Good Ship Lollipop.”

Ned keeps Mary employed since he:

A motorist (Rodney Hildebrand) runs into Mary when she runs to the Glendale Airport.

NYC resident Adele Martin (Judith Allen) disembarks to visit Cousin Anita. She lets ex-fiancée Loop know about Mary’s death. In the airplane, Loop reassures Shirley that her parents and his parents are now in heaven.

The Smythes owe their luxurious lifestyle to Ned. Ned retains the family name’s original spelling. His son and daughter-in-law show their pretentiousness by “gentrifying” their surname.

He reassures Shirley that a magic ring connects them in times of need or trouble. He shares his scrapbook pictures of his ex-girlfriends and of Shirley’s father.

Joy and Shirley give their dolls buggy rides. Joy grabs a kitchen knife because:

Shirley runs to the airport. She sneaks into the baggage area before Loop flies a package to NYC for $1,000.

Shirley hears a radio news release describing Loop as a suspected kidnapper. She joins Loop in the cockpit. They parachute to a cliff while gas lines break.

Shirley Temple - On The Good Ship Lollipop.avi ~ "It's a sweet trip to a candy shop where bon bons play on the sunny beach of Peppermint Bay"

Uploaded to YouTube on March 30, 2010 by Damien Chemillé ~ URL: http://www.youtube.com/watch?v=WLLSqpYyPD8 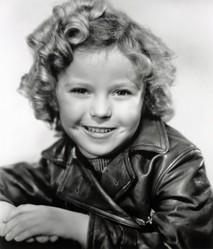