The 1937 film version of "Heidi" reveals how city versus country living sits with characters played by Jean Hersholt and Shirley Temple.

Things change a lot when a little girl’s parents die.

Little Heidi finds happiness in the most unlikely of places, in an isolated hut with an ornery grandfather. What will happen when big city opportunities draw her away from life’s simpler joys in “Heidi”?

Southern California's San Bernardino National Forest: scenes in "Heidi" were filmed in this scenic landscape, established as a national forest in 1907

Klara anticipates her father’s return for Christmas celebrations. She offers to convince Sesemann to get Heidi back to Adolph’s if Heidi so wishes. She overwhelms her father by walking on Christmas Eve.

Sesemann acknowledges Heidi’s role in Klara’s happiness and mobility. He fires Rottenmeier. But he refuses to honor Klara’s promises because of Dete’s criticisms of Adolph’s situation and temper.

Adolph completes the 100-mile/160.93-kilometer journey from Dorfli to Frankfurt am Main. Frankfurters dislike Adolph’s desperation over Heidi’s whereabouts. They get Adolph arrested.

Rottenmeier attempts to sell Heidi to gypsies. Adolph gets himself and Heidi free. Police put Adolph back in jail when Rottenmeier represents Heidi as her daughter.

The movie ends with Sesemann:

Characters played by Cesar Romero and Shirley Temple bring peace to the Khybe... 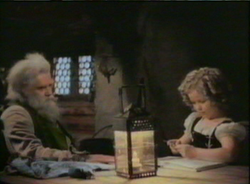