Film Review of I’ll Be Seeing You: Shirley Temple in 1945 Drama With Joseph Cotten and Ginger Rogers

The honesty of a character played by Shirley Temple may or may not ruin romance for her cousin (Ginger Rogers) and a sergeant (Joseph Cotten) in the 1945 film "I'll Be Seeing You."

Friendship and love develop best when communication channels are open.

Some secrets can be too uncomfortable for easy sharing. What will happen when the truth must out before two lovebirds can think of saying “I’ll Be Seeing You”?

Getting to know someone can be tricky when there is something to hide in I’ll Be Seeing You by writer Marion Parsonnet, producer Dore Schary, and director William Dieterle. Tony Guadio, William H. Ziegler, and Daniele Amfitheatrof handle cinematography, editing, and music. Filming showcases California’s Los Angeles and San Bernardino Forest areas.

The movie begins with Mary Marshall (Ginger Rogers) and Sergeant Zachary Morgan (Joseph Cotten) catching the Pine Hill train. Mary has an eight-day furlough from the state prison. Zach is on ten-day leave from a military hospital. Neither one shares that information.

Zach claims to visit his sister. Mary presents herself as a traveling saleslady home for Christmas holidays with relatives. They proceed to exchanging names and expecting future interactions. Mary stays with Aunt Sarah (Spring Byington) and Uncle Henry (Tom Tully). Zach telephones Mary from the YMCA.

Mary and Zach dine, go to a war movie, and stop at a café. Zach is forthcoming about fabricating a sister to be near Mary. He is reticent when Mary attempts relating the film to Zach’s war experiences. Back at the room, Zach panics over his shell-shocking during World War II possibly ending up as disfiguring as that night’s soda jerk’s facial tick from World War I shell-shocking.

Mary describes turning to secretarial work after her parents’ deaths. Her wealthy employer invites her to what sounds like a dinner party. She is the only guest. Mary accidentally pushes her drunk host through an open apartment window. A manslaughter conviction results in a six-year prison sentence.

Zach accounts for his abrupt behavior and health concerns during a day at the lake with Mary. He enjoys Christmas dinner with the Marshalls. Sarah gets Mary a new dress when Zach invites the Marshalls to the YMCA’s New Year’s Eve party. Zach is stressed by:

The movie ends with Zach:

DVD: I'll Be Seeing You 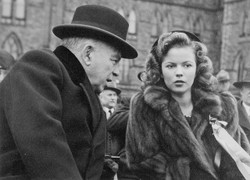 Diaries and divorce impact characters played by David Niven and Shirley Temple in the 1949 film version of "A Kiss for Corliss."
21%  0   3 DerdriuMarriner
Drama

How does a knobby-kneed racehorse impact on characters played by Barry Fitzgerald and Shirley Temple in the 1949 film version of "The Story of Seabiscuit"?
Loading ...
Error!