Can characters played by Esther Ralston, Randolph Scott, and Shirley Temple escape from generations of Southern blood feuds by moving to The Old West?

A fifteen-year-old escapes Germany’s violence of the 1840s-1850s. He explores non-violent endings to feuds that he marries into.

Will moving west after the War Between the States (April 12, 1861 - April 9, 1865) add to or end his troubles in “Law of Vengeance," also released under the alternate title of “To the Last Man”?

"Law of Vengeance" is the first of two movies that Shirley Temple and Randolph Scott made together. "Susannah of the Mounties," their second film, was made six years later in 1939.

Photo selected by Shirley for the cover of her autobiography, "Child Star"

Ellen goes swimming. Jim is between her and her clothes. Lynn’s lassoing a birch opens the sluice gates. Jim retreats. Ellen thanks Lynn by:

Published on YouTube on February 9, 2013 by Western Mania ~ URL: https://www.youtube.com/watch?v=n22ylXYLyc0

Author Loraine Burdick's collection of Shirley Temple memorabilia is one of the most extensive in the world.

Law of Vengeance, also known as To the Last Man 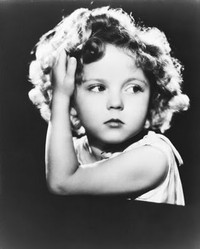 Merna Kennedy and Shirley Temple learn how to survive prohibition and shootouts in the 1932 film version of "Red Haired Alibi."
100%  11   7 DerdriuMarriner
Comedy