A self-taught genius gets sued over comments in his best-seller. Generous cash awards stipulate a college degree. Will condescending sophomores, leery administrators, and career-minded journalists help or hurt when “Mr. Belvedere Goes to College”?

Actor Jeff Chandler (Dec. 15, 1918 – June 17, 1961), stage name of Ira Grossel, appeared briefly but memorably as a police officer in "Mr. Belvedere Goes to College."
• Jeff had set aside his stage career to serve for four years in World War II.
• The year after Jeff appeared in the 1949 comedy with Shirley Temple and Clifton Webb, he achieved stardom through his Academy Award nominated role as Cochise (Apache: K'uu-ch'ish "oak") (c. 1805 – June 8, 1874) in "Broken Arrow," released on July 21, 1950.
* Jeff reprised the role of Cochise in two more films: "The Battle at Apache Pass" in 1952 and again in "Taza, Son of Cochise" in 1954.
• Tragically, Jeff died after several operations stemming from back injuries while playing baseball with U.S. Army Special Forces soldiers who had appeared as extras in his last film, "Merrill's Marauders," released on June 13, 1962, one year after Jeff's death.
• Jeff's death, determined to have resulted from malpractice, garnered a large settlement for his children, Jamie Tucker (1947–2003) and Dana Grossel (1949–2002), both of whom succumbed to cancer, the illness that took the lives of Jeff's mother, maternal aunt, uncle and grandfather.

"Mr. Belvedere Goes to College" was the first of four films featuring Shirley Temple in 1949, the year that saw the end of her film career and her first marriage.

Manzanita Lake, formed by the damming of an irrigation ditch in 1911, is an iconic landmark on University of Nevada-Reno campus, where "Mr. Belvedere Goes to College" was filmed .

The 83-minute comedy draws upon Gwen Davenport's (October 3, 1909 - March 23, 2002) characters in the 1947-published novel Belvedere. It follows the 1948-released Sitting Pretty and precedes the 1951-released Mr. Belvedere Rings the Bell. Its distributor was 20th Century-Fox. Its NYC-premiere and USA-release dates were April 15 and May 1949.

He charms freshmen by:

He mulls suing Clemens and Ellen. He opts to:

Ellen does not open the door when Lynn tries to mediate. Lynn enters Davy's room by the fire escape and ledge. Ellen feigns not knowing Lynn.

Author Loraine Burdick owns one of the world's most extensive collections of Shirley Temple memorabilia.

Shirley Temple: a cute, talented kid grows up into a pretty, talented actress

WriterArtist, It's a fun ensemble film to watch. Unfortunately, it apparently is not currently available via Amazon, and the full length version of the film no longer seems to be available via YouTube or other video interfaces on the internet.
Yes, by all means: jump at the opportunity if it ever arises to see "Mr Belvedere Goes to College."

I love this lady -Shirley Temple and would jump to watch the film if I ever get a chance. She is terrific and I like her hair style.

Kathleen, Tee hee: I also thought Jamie Lee was going to end in an ignominious heap on the floor! :-)
Me too: I enjoyed watching the clip of Shirley's Lifetime Achievement Award. The retrospective honoring Shirley's three careers -- child actress, wife/mother, diplomat -- was well done. In accepting the award, Shirley displayed such charm and graciousness. One of the things I like about Shirley is that you can see Shirley the child in the face of Shirley the adult.

I really enjoyed watching this incredible lady receive her Lifetime Achievement Award - gosh, Jamie Lee should wear flats! I thought she was a gonner for a moment! :)

Is it possible for a little Confederate girl, uprooted by events at Fort Sumt... 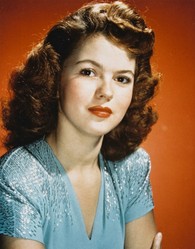 Diaries and divorce impact characters played by David Niven and Shirley Temple in the 1949 film version of "A Kiss for Corliss."
34%  2   4 DerdriuMarriner
Family Movies 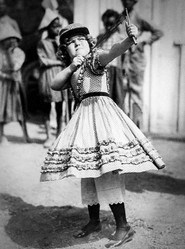 Is it possible for a little Confederate girl, uprooted by events at Fort Sumter and busking with her family's tap dancing slave for train fare, to meet President Lincoln?
Loading ...
Error!