In "My Man Godfrey" a comedic romance starts with a dizzy socialite's lark of a scavenger hunt for a forgotten man, who turns out to be quite unforgettable.

Disappointments can be embittering or inspiring.

They sometimes discourage sufferers from doing their best. They oftentimes encourage others to retrieve their self-esteem elsewhere. It perhaps is to be expected that romantic deceptions will be:
• Less easily dominated, in the first case, when they are compounded by financial reversals;
• More quickly overcome, in the second instance, when they are felt by socio-economic elites.

Movies such as “Mr. Deeds Goes to Town” and “My Man Godfrey” suggest that, to paraphrase Berlin-born cultural historian Dr. George Lachmann Mosse (Sept. 20, 1918 – Jan. 22, 1999), rain falls on us all, but sometimes powerholders share their umbrellas with the powerless.

scene from "My Man Godfrey" with William Powell, Carole Lombard, and Jean Dixon

Irene gives Godfrey money for clothes. She hires Godfrey to buttle. Godfrey is helpful in giving pixie-chasing, Worcestershire-sauced tomato juice to Irene’s hung-over mother Angelica (Alice Brady). He is unhelpful in long-time maid Molly’s (Jean Dixon) pondering the crossword for a three-letter bird with the middle letter “r” (ern, Haliaeetus albicilla). He is unwelcomed by Angelica's husband, Alexander (Eugene Pallette), after Irene kisses Godfrey in the butler's room off the kitchen.

Cornelia blames Godfrey for misplaced pearls. Police find nothing under the mattress where Cornelia hides them. Alexander persuades police to drop investigations by writing a check to the pension fund.

Irene breaks her engagement. She and Cornelia go to Europe. Godfrey and Tommy ideate plans to employ derelicts.

A graduate of New York's American Academy of Dramatic Arts with experience in vaudeville and on the Broadway stage, William Powell was well prepared to find fame and fortune as a major star at Metro-Goldwyn-Mayer Studios.
the suave actor's home in Beverly Hills, on linen textured postcard, ca. 1930-1945
The Tichnor Brothers Collection, Boston Public Library: Boston Public Library, CC BY 2.0, via Flickr @ https://www.flickr.com/photos/[email protected]/7535841870/

A graduate of New York's American Academy of Dramatic Arts with experience in vaudeville and on the Broadway stage, William Powell was well prepared to find fame and fortune as a major star at Metro-Goldwyn-Mayer Studios.

A landmark screwball comedy from Hollywood's golden age, My Man Godfrey follows the madcap antics of a ditzy debutante (Carole Lombard) who stumbles upon a "forgotten man" (William Powell) at the city dump.

My Man Godfrey (Color/Black and White)

My Man Godfrey is one of the top Screwball Comedies of all time.

Godfrey: "I may have missed you a little more than I did Cornelia." Irene: "I'm glad because if you missed Cornelia more, you probably missed me less." Godfrey: "That sounds very logical."

Godfrey: "I can take care of myself." Irene: "You can't look me in the eye and say that. You love me, and you know it."

In the 1936 film version of "Poor Little Rich Girl," characters played by Ali... 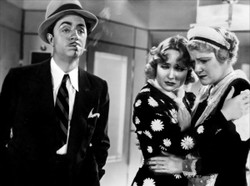 Diaries and divorce impact characters played by David Niven and Shirley Temple in the 1949 film version of "A Kiss for Corliss."
27%  0   4 DerdriuMarriner
Drama