In the 1934 film version of "Now I’ll Tell," characters played by Shirley Temple and Spencer Tracy get through Prohibition.

One ends up as the police detective father of a character played by Shirley Temple. The other has trouble shaking gals, gamblers, and gangsters for the respectability he craves and the wife he loves in “Now I’ll Tell." "Now I'll Tell" was the only film featuring Shirley Temple with Spencer Tracy (April 5, 1900 - June 10, 1967).

The movie begins with Murray Golden (Spencer Tracy) sending himself a telegram from multi-millionaire Harry Payne Whitney. He brings the wire to the Saratoga racetrack in order to place a $200 bet. He celebrates even though he loses. He marries a racetrack and party attendee, Virginia (Helen Twelvetrees).

By 1914, Murray is a happy husband and successful gambler. On their wedding anniversary, Murray promises Virginia to retire. He reneges after:

By 1919, Murray has his gambling operations. Peggy has Murray’s time, $100,000 in trust funds, and Park Avenue for an address. Virginia has Murray’s love and money.

By 1924, Al decides upon revenge. He gets George drunk enough to reveal Murray’s pay-off. He kidnaps Virginia.

Murray agrees to a crap game after pawning Virginia’s jewelry. He loses $200,000. He threatens to identify Al as Eddie’s killer.

The movie ends with Murray:

In 1930, Spencer Tracy's role in Broadway convict play The Last Mile led to his feature film debut in convict film Up the River.: kate gabrielle (kate gabrielle), CC BY 2.0, via Flickr @ https://www.flickr.com/photos/slightlyterrific/5365058953/

Spencer Tracy made 25 films -- including "Now I'll Tell" -- while under contract with Fox Films Corporation.

In 1938, two years after appearing in crime drama, "Now I'll Tell," Shirley Temple received a personal tour of the Department of Justice. 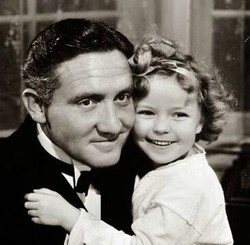 Diaries and divorce impact characters played by David Niven and Shirley Temple in the 1949 film version of "A Kiss for Corliss."
35%  0   5 DerdriuMarriner
Family Movies